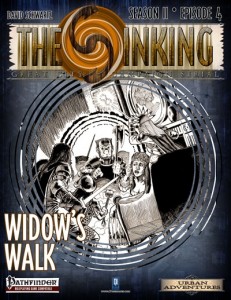 This installment of 0onegames’ short modules centering on one catastrophe is 17 pages long, 1 page front cover, 1 page SRD, 1 page editorial, 1 page ToC, 2 pages advertisement and 1 page back cover, leaving us with 10 pages of content, so let’s take a look, shall we?

The Hasserbruk family has had to endure quite a lot – when Albrion Hasserbruk’s ship vanished beneath the waves, his widow grieved, though she did take the reins of the family business, as women of well-bred stock are wont to do. The widow Hasserbruk thus raised the family to newfound glory. Then, suddenly, her presumed dead husband returns….and she slams the door in his face.

Enter the PCs – and an investigation resumes that will prove…interesting. For while the lady suffers from a slight delay in facial muscles, both she and her faithful butler seem to be telling the truth…as does the captain. The resulting investigation of the mansion and the Hasserbruks hides a disturbing truth – turns out, the widow Hasserbruk has committed suicide years ago, deeming her beloved husband gone. As fate would have it, an unlikely couple stumbled across her body.

Turns out that the lady’s faithful butler is the former lover of the being that now controls her – an intellect devourer. But not any intellect devourer, but one that chose said bard over its own brethren and thus was exiled. Maintaining the body of the widow with a magic mirror, the creature is actually an exile from its own people and hunted…and as far as intellect devourers are concerned, it is open and yes, nice even. So the PCs are looking at an interesting conundrum – the creature hasn’t done anything wrong and exposing t will mean certain doom for it. Worse, hunters of the intellect devourers have arrived in the city and seek to reclaim the magic mirror that is the basis for the widow’s body…

A moral conundrum indeed, one without any right answers, but with A LOT of different, awesome, roleplaying options and consequences. Better yet, the module actually features various helping pieces of information that cover spells and similar ways of finding out the truth – great to see those options being taken into account.

Editing and formatting are good, though not perfect, I noticed a couple of minor typo-level-glitches. Layout adheres to 0onegames’ neat 2-column standard and the original pieces of b/w-artwork are great, as are the maps. Though, as always with the series, I would have enjoyed printer-friendly versions of them. The pdf comes fully bookmarked for your convenience.

The characters herein are well-crafted, and the capabilities of 8th-level characters are taken well into account -what can I say: I’m thoroughly impressed by David Schwartz’s ability to cram a TRULY interesting scenario into the scant few pages allotted. Roleplaying potential, awesome moral conundrums, cool builds -this is a truly awesome little module, with the superb price-point offsetting the lack of player-friendly maps. My final verdict will hence clock in at a triumphant 5 stars + seal of approval. Glorious!

You can get this great mini-module here on OBS!