The Mires of Mourning 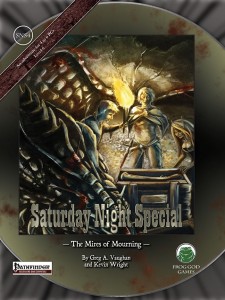 This module is 24 pages long, 1 page front cover, 1 page editorial, 1 page ToC, 1 page SRD and 1 page advertisement, leaving us with 19 pages of content, so let’s check it out!

Morninghaven sanatorium, constructed in the heart of the Creeping Mire, founded by the church of Mitra and headed by the prestigious Osterklieg family had for some time had its reputation decline, even as a place to lock up the criminally insane. When Baronet Wilbane Osterklieg fell from favor, his presumed sizable fortune was never found. Now, for 30 years, the sanatorium has languished in the mire, sinking slowly closer towards the unfathomable depths of the swamp.  The PCs are hired to escort one Haden Ward (an incognito provided by the state) to the sanatorium and the escort mission is anything but simple – from collapsed paths to giant mosquitoes and an assault by warriors from the swamp’s bugbear-tribe, there are 3 planned encounters in addition to the random encounters-list included for the way to Mourninghaven.

At the sanatorium, the  Curator Xavier Drusus and the bloodstained, masked orderlies are not particularly confidence-invoking. Unfortunately, a storm sees the PCs stranded at the sanatorium for the night (which is btw. fully mapped and described) and the night is interrupted by escaped madmen escaping from the cells and an assault from more bugbears and even a black dragon – in the chaos, the orderlies may even turn upon the PCs (they are not nice persons…). The badly wounded Drusus, with his dying breath, confesses that he was after the Osterklieg Legacy and that the catatonic madman they escorted was in fact Osterklieg’s former lieutenant, a sadistic mercenary named Harden Crestingdrake. And he’s gone.

The trail leads the PCs into the heart of the swamp, where in an old stockade the PCs get a chance to destroy the remnants of the bugbears and find out that there’s a potion to let Haden regain his memory – as well as the location of the secret stash, which is in the Black Ward – now abandoned, it’s where Osterklieg stashed incurable psychopaths. It is here that the module becomes full-blown horror in style, with Haden bugging the PCs with whispered rumors in a psychological war of attrition as they explore the partially sunk ward and battle twisted ghasts, an almost indestructible fungal creature that has evolved from Vidas Osterklieg, basidronds, a cool haunt and an allip. You get sample lines for the encounters and finally, the PCs will have to face off against Crestingdrake, now suffused by the darkness of the ward and turned into a bleeding horror.

The players may also find out about Osterklieg killing Mitran pilgrims as they find his stash and the bloodstorm spell sees an upgrade from the honorable Relics and Rituals-book.

Editing and formatting are top-notch, I didn’t notice any glitches. Layout adheres to FGG’s 2-column b/w-standard and the pieces of original b/w-artwork are awesome. The pdf comes fully bookmarked with nested bookmarks.  The cartography per se is nice, but we don’t get ANY key-less player-friendly maps, which is just not up to standard when compared to similar publications.

Author-duo Greg A. Vaughan and Kevin Wright has created an interesting module – the locations are iconic to the extreme and rather disturbing, conveying a profound sense of dread. By all accounts, I should love this module – “The Death of Dr. Rudolph Van Richten” is still my favorite module of all time and the locations are great. However, this module ahs major issues regarding pacing – essentially, it is very obvious in its railroading and hands the relevant information needed to progress to the players on a silver platter, without much required initiative on behalf of the players beyond “Kill X” – no research, no moodbuilding…and worse: No consequences.

The main location of the module is an unabashedly evil place that should have paladins etc. disgusted – so what if they DO want to do something about it? Not covered. Alternate ways of handling the whole thing? Not covered. The stockade feels completely cut-down and is perhaps one of the most useless locales I’ve seen in a given module for quite some time – its space should have been used to properly depict and flesh out another part of the story.

This is a sad module to review, since it DOES have all the makings of a great module and a DM with some work can make this work VERY well – as written, though, this somewhat falls behind and simply feels too short. At 19 pages, the module does not devote enough time to any of its locations to make them properly shine – instead, the PCs are shunted from location to location, stumble across hint (Go there!) upon hint (Now go there!)and end the module with a climactic encounter that is cool – but ultimately just the end of a very railroady sequence of events that lacks the gravitas the background story and exciting locales should have provided this module.

In the end, this module suffers greatly from its unnecessary brevity and its endeavor to cram too much content into the scarce few pages the module has – if it had developed one of the locations, any one really, better and cut another location or if it had 10+ more pages to develop its iconic locales, then this could have been 5 stars + seal of approval. As written, it falls painfully short of its own potential and hence, I’ll settle for a final verdict of 3 stars.

You can check out these mires in two versions:

The PFRPG-version can be found here on OBS and here on d20pfsrd.com’s shop!

For old-school aficionados, the S&W-version can be found here on OBS and here on d20pfsrd.com’s shop!