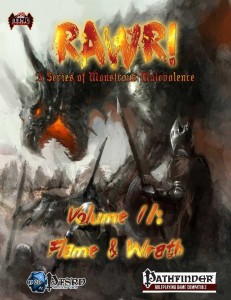 This installment of TPK Games monster-series is 65 pages long, 1 page front cover, 1 page editorial, 1 page ToC, 1 page SRD, leaving us with 61 pages of content – quite a bunch, so let’s take a look, shall we?

We kick off this book with an introduction by Tom Phillips before diving head first into the chapter by Richard Hunt  -all about monster psychology, this chapter should especially prove helpful for less experienced DMs, providing sound advice on considering a monster’s disposition when crafting encounters – is it happy? Cowardly? Angry? Perhaps it suffers from one form or another of madness – from MPD to schizophrenia and a wide list of phobias, we get quite some nice advice, though for ideas on phobias I’d also wish to point DMs out there to Call of Cthulhu or Trail of Cthulhu for inspiration in spades. All in all, a useful, nice chapter for beginner-DMs with neat advice, though not a chapter that will wow jaded DM-veterans…

What instead should prove to be useful for just about every DM would be chapter 2 –  essentially, herein we get optional rules for dragons: First of which would be dragon barding  -and yes, I always considered it stupid that this idea wasn’t more common in most worlds – dragons may be arrogant, but they’re not stupid, so additional armor makes sense…especially at larger sizes, when dex gets less and less useful/reduced. These bardings come with tables denoting their cost, min amount of humanoids minions needed to put on and yes, also the time frame that is required to don the armor – all by size. Now barding does influence flight – heavy barding makes it impossible, whereas medium barding drops maneuverability by 1 point and halves flight speed. This might come as a surprise, but the solution for medium barding here actually contradicts obscure rules on flight in PFRPG – creatures may not fly with medium or heavy load – and by conjecture, with medium armors; For ME, this is an issue.

That being said, they’re DRAGONS – if any creature deserves an exception to the rule, it’s them, so I’ll stop nitpicking…this particular rule-set. Also rather neat would be an alternate rule that allows dragons to embed treasure in their scales for increased armor bonus as well as  a handy table that includes options for dragons dropping huge options on small puny earthbound adversaries – neat! What about the aberrant pigmentation dragon template, which allows you to color-swap dragon scales for nasty surprises? Yeah, rather awesome, especially considering the fact that I always loathed the fact that they’re color-coded for dragon slayer’s convenience… Nasty!

Chapter 3 sees Brian Berg collaborating with Mike Welham for first an array of new draconic feats – fancy some hooked talons on the wings that net the improved grab special quality? What about a roar that is not only terrifying, but also deals (lethal or nonlethal)sonic damage? Ball-shaped breath weapons? Using the breath weapon to further shield the majestic reptile? VERY nasty would be draconic savagery – even when missing with claw or bite, the target still takes str-mod damage – and we all know that’s usually not a dragon’s dump-stat – great to represent them slowly chewing apart even the best buffed/armored of dragon slayers… Cold-based breath weapon users may freeze the wings of foes and with a feat, a dragon may count all 1s of a breath weapon as 2s. Vastly improved tail attacks and hitting foes with it while retreating also become options thanks to the feats herein – now where I’m not sold would be Killing Roar: While I can get behind a dragon’s scream killing a target, the insta-death feels a bit anachronistic: I would have preferred vast amount of damage in line with most death-effect-spells. Then again…these are dragons. If anything can scream and make foes drop dead from that, it would be dragons… We also get 7 new traits for dragons – universally solid and especially the trait that lets them use embedded weapons as armor spikes is nice. It should be noted, though, that if you’re looking for meta-breath feats à la Draconomicon, you won’t find any here – the breath weapon feats herein primarily modify the limited breaths of half-breeds and those with bloodlines, offering e.g. additional uses per day (which full-blown dragons don’t require). So a bit of a missed chance here.

Now before we delve into further crunchy bits, we get one full-page piece of artwork that is simple gorgeous – Dusan Kostic would be reposible for the majestic spread unless I’m mistaken – just wanted to give kudos where kudos are due.

Now chapter 4 introduces us to draconic bloodlines. No. Not the ones sorcerors get. Rather, the concept is handled via feats for dragons; Major Bloodline feats may only be taken at first level/HD and net you elemental resistance 2 for the dragon’s respective element as well as +2 to diplomacy and intimidate against your draconic bloodline’s dragons. Additionally, you get +1 to one skill and said skill as a class skill – again, the skill is determined by the color of your ancestor’s scales. Unless I’ve miscounted, a total of 86 feats are thus unlocked – these increase e.g. bite damage with +2d6 acid, grant spell-like abilities to e.g. speak with animals, insect plague, create food or water, fog cloud or locate objects to find gems.

Now as a peculiarity, several of these actually have synergy effect that improve them when combined with the right major draconic bloodline – aforementioned fog can e.g. be made into a cold-based variant of acid fog that coats floors with grease-like effects. While many of these feats have cool unique effects like this, not all do, though. Spouting draconic wings should be particularly interesting for half-breeds and sand-based gusts of wind that have a chance to blind foes could become full-fledged sandstorms. Walking on clouds, auras of slowness -all cool. Less nice: While you can get a draconic tail for attack purposes, and while it attacks at -5, making the mechanical intent clear, it does not explicitly declare the tail as a secondary natural weapon – a slight hick-up in wording here.

Of course, breath weapons may also be further improved/gained and elemental auras are also part of the deal – though I wished these scaled with age category, if applicable. All in all, I really like all these options, since they make dragons more versatile, more diverse, and add some oomph to them. Now whether you like this or not, the respective feats and their prerequisites are based on both bloodlines and HD, making it easy for you to add these feats to monsters for all types of half-breeds – at the same time, though, the reduction of these down to feats mean that they don’t scale well with dragons, for whom feats are a rather scarce good – templates would have helped there. Also: The respective auras, as awesome as they are, could require some age category-scaling – otherwise a wyrmling’s aura is the same as a great wyrm’s – and that feels wrong to me. It’s ultimately a nitpicky gripe, but one that I feel prospective DMs should be aware of. To me, this decision/oversight is particularly paradox since TPK Games is currently releasing pdfs on scaling feats with their “Feats Reforged”-series.

If you instead want to go for a less pronounced draconic lineage, there also are minor draconic bloodline traits that net resistance 1 to the appropriate bloodlines’s element and +1 to diplomacy and intimidate when interacting with the dragons in question. These traits can also qualify you for at least an array of aforementioned feats. Unfortunately, the pdf fails to specify to which category of traits these are supposed to belong, though I assume racial – it’s the only one that makes sense. Now if you’d rather go template, next we’re introduced to templates – minor and major templates, for each draconic bloodline at CR +1/+2 respectively. As a nice bonus, each bloodline comes with one sample creature to which one of the two templates (and partially additional ones!) have been applied.

The pdf concludes with 5 new creatures: First would be the wingless, almost serpentine Antboga at CR 17 not only has an aura of destructive gravitational field and a force-damage dealing breath weapon, it also has a gaze attack that may increase your load (which might send fliers tumbling from the sky…). Second would be the Lyukana at CR 12 – with fever-inducing gaze and caustic sweat another cool adversary. The CR 12 Mound Worm can regenerate when managing to frighten foes with its terror-inducing bite and it also is rather poisonous. The CR 10 Ursaor, a bear-like being with a red/green-scaled  head may be a cool apex predator and yes, it makes for a cool imagery, but it could have used some signature attack beyond its lethal bite. Still, nice critter. Finally, the CR 2 Winged Viper can be taken as a familiar via improved familiar.

Editing and formatting are very good – while I noticed some minor glitches, non too grievous or significant obstructed my understanding of the content herein. Layout adheres to a 1-column b/w-standard – apart for the purpose of statblocks NOT my preferred standard – to me, 1-column files always look a bit cluttered. Also layout-wise a complaint – there are instances where the name of one feat is on one page, the feat’s text on the next. Not a fan of those, but again, this is me nitpicking. The pdf comes fully and extensively bookmarked and hyperlinked with the good kind of unobtrusive hyperlinks – those I tried always sent me off to the right location on d20pfsrd, so kudos for the work!

The artwork ranges from phenomenal original to ok stock – no complaints here either – apart from one: I’m usually not a stickler for art, but new monsters usually benefit greatly from good artwork – I wish we had gotten art for the new creatures.

Brian Berg, Richard Hunt, James Olchak, Tom Phillips and Mike Welham have created a neat supplement…though one that suffers from a bit of an identity crisis. I’m honestly not sure whether this is supposed to be for DMs, players or both – and hence how to rate it. Why? Because I’m a firm supporter of the “F*** Balance, it’s a DRAGON! It CAN do that!”-school of DMs: My dragons have minions, custom abilities and fight with ever single dirty trick in my considerable book of nasty DM-tricks. My players have learned that taking on a dragon amounts to suicide more often than not sans army…and possibly even with one. Now for that, this toolbox, let me phrase that precisely and explicitly, is AWESOME.

Unfortunately, as a reviewer I have to take other campaigns into account – and to an extent the same holds true there. If you for example play in such a high-powered game that your DM allowed you to play a dragon, then this makes for a superb toolbox to increase your arsenal, though admittedly additional daily-use feats for breath weapons won’t inspire any dragon…they already have thos infinite times per day. Now where I’m seeing problems is with less high-powered campaigns featuring dragons – e.g. via RGG’s Dragon Rider-class. In such a context, the content herein may prove to be unbalancing and should be carefully scrutinized by the DM before allowing it in the game – perhaps on a case by case basis.

How to rate this, then?

As a mean DM’s toolbox – superb; For high-powered games: Nice. For more conservative games…potentially problematic. Is this pdf perfect? No, but it honors the TPK in TPK Games – and in the end, I’ll rate it as a monster-book/DM-Kit – one that could require age-category scaling for auras and has some rough edges, but still is a VERY nasty kit. My final verdict will hence clock in at 4.5 stars, rounded down to 4 by a margin.

You can get this nice toolkit for draconic threats here on OBS and here on d20pfsrd.com’s shop!