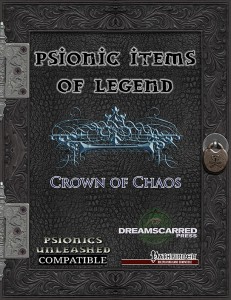 This pdf is 6 pages long, 1 page front cover, 1 page editorial/introduction, 1 page SRD, leaving us with 3 pages of content, so let’s take a look at DSP’s latest Legendary Item, i.e. item that grows in power over the levels.

The tale of the Crown of Chaos is one of the downfall of a talented wilder come queen named Magdylyne, self-proclaimed and bitter queen of chaos, and thus her crown requires the wilder-ability to overchannel. The item has 5 power-progressions (5thth, 10th, 15th and 20th level unlock new powers) and contrary to what the item’s table says (it mentions a lesser psicrown), the crown instead act as a greater psicrown of force and fire. Unlike the basic item, all powers the crown grants count as being a part of the powerlist of the class – great for the power-starved wilders. The crown may also provide power points for augmenting purposes, but the wielder pays for this with non-lethal damage – I assume this damage does not require a concentration check to properly manifest, but the item does not specify either way. At higher levels, the crown nets the wearer a reroll and even starts regenerating power points. As a capstone, the crown delivers a miss chance as well as forcing two rolls for saves and skill checks, taking the worse result.

The final page contains the item-stats for regular Psicrowns of Lesser Fire and Force and their True versions.

Editing and formatting are ok, though glitches at this length weigh heavily on my scale. Layout adheres to a printer-friendly two-column b/w-standard with a nice full-color artwork for the crown. The pdf has no bookmarks, but needs none at this length.

The crown per se is a great item that greatly enhances the experience of running a wilder, but at the same time, it suffers from issues: Not being able to decide which type of psicrown (lesser, greater?) it is would be one, another flaw is more thematic – the chaos-aspect is mostly missing from the crown – apart from the capstone and a relatively boring reroll, the link between theme and crunch is more tenuous than I would have enjoyed – a tighter focus would have helped here. Hence, my final verdict will clock in at 3 stars.

You can get this crown here on OBS and here on d20pfsrd.com’s shop.