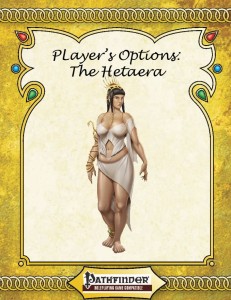 This new class clocks in at 14 pages , 1 page front cover, 1 page editorial, 1.5 pages of SRD, leaving us with 10.5 pages of content, so what does this class deliver?

The Hetaera gets d8, 6+int skills per level, a custom proficiency list (including light armors and bucklers), 3/$ BAB-progression, good ref- and will-saves and spontaneous divine spellcasting via Cha of up to 6th level spells from a custom list. Now what’s VERY interesting is a very powerful ability, that still has a limit -service spell. Per spell level, she may cast +1 spell beyond her fixed allotted array- with a successful spellcraft check even one that she doesn’t know, but is on her list. But ONLY if the spell provides a benefit for others for no personal compensation. Generally, that is a good way of making spellcasting less ego-centric and I applaud the intention behind this, but the execution is flawed. Take a buff that targets all in an area or an attack spell to prevent a killing stroke on the character to save innocents? Selfless or not? This ability has A LOT of roleplaying potential, but it needs a tighter definition to avoid sparking endless discussions at the table…

At almost every level (exceptions being the 4th, 7th, 13th, 16th, 19th and 20th), the Hetaera gets an endowment – the talents of the class, and partially they are interesting indeed – take “double-edged sword” – her current and former lovers treat her as one level higher for the purpose of healing, but also increase the DC versus damage-inducing spells by one. While this one could use some scaling, the concept is brilliant and offers quite a few grand roleplaying opportunities. Quite a few of the abilities presented here make the Hetaera a superb social face for the party – what about telling lies and allowing those you lied to use your bluff to convince strangers of the truth of your fabrication? Yeah. Poison Use, honeyed words or what about treating settlements as larger for the purpose of selling/buying items? It should also be noted that, in the tradition of talents/advanced talents, a hetaera’s array of endowments is expanded upon 10th level to include more powerful ones.

Hetaera also get non-quantifiable boons from NPCs that go beyond even endowments, with ample examples given in the pdf to help a DM judge what’s feasible and what isn’t. Now at 7th level, the Hetaera can deliver spells 4+ cha-mod times per day via a kiss – they just have to have a range of touch. Oh, and yes, getting rules for kissing unwilling targets would have been nice here and can be considered an oversight, but the ability has another focus – the spells delivered thus do NOT count against her regular allotment of spells! Rather interesting and full of roleplaying potential – when crunch opens by virtue of its design story-threads, you know it has something going for it.

As a somewhat underwhelming capstone, the Hetaera gets a kiss of death, which is cool, yes, but the lack of rules for kissing unwilling targets (though I’d go with pinning if social guile doesn’t work…) somewhat cripples it. The Hetaera’s Spell-list is btw. thematically and spell-selection-wise solid – not too powerful and not too weak. Among the spells, which include the magical version of beer goggles (glorious) is also a level 1 spell that disrobes the target – which is crippling to armored warriors – 1/2 time to don afterwards? Congrats…That’s a save-or-suck that needs some nerfing… Other than that, the sensuous and tasteful spells for heightened senses, and yes, even a genderbending spell that can be made permanent, are found herein. I’m sure some members of the LGBT-community or players who want to play such a character will greatly appreciate this one. I also like the spell that can summon a willing lover to your aid. As always, we also get a sample 1st level character.

Editing and formatting are very good, I noticed no significant glitches. Layout adheres to PDG’s printer-friendly 2-column standard and the pdf comes fully bookmarked for your convenience.

Patricia Willenborg’s Hetaera…is so far my favorite class in the whole Player’s Option-series. By a long shot. The Hetaera as a concept is GLORIOUS. The implementation is tasteful. And just about EVERY ABILITY of the class has some kind of roleplaying potential, all without the class being useless in rollplaying environments – though she definitely fits better into social situations. This is the class of divine secret agent meets femme/garçon fatal(e) you never knew you needed, but suddenly realize you damn well do – as if she’s cast a spell on you… Kidding aside – this class breathes adventure potential and high intrigue, and while not too well suited for dungeon crawl campaigns (though she does work there as well!), in any other context, she shines. I’d immediately slap my 5 stars + seal of approval on this beauty, were it not for the small hickups, for example regarding the kisses, the somewhat lackluster definition of the service spells and the (slightly) overpowered disrobe-spell. Still, this class has potential galore and bespeaks of a talented designer, of whom I hope to see more. Final verdict: 4.5 stars, rounded down by a slight margin to 4.

You can get this cool class here on OBS and here on d20pfsrd.com’s shop.