The Mysterious Peaks of Baranthar 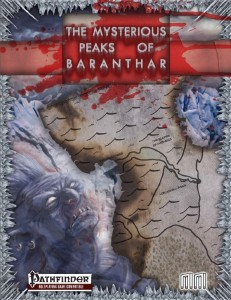 Still here? All right! In the “Clockwork Wonders of Brandlehill“, the PCs found a corpse of a half-orc ranger and his journal detailing an uncompleted quest dealing with the demonic entity Grualroth and finally putting an end to its vile ruminations. The trail of the compiled information leads towards the peaks of Baranthar. This, of course, only remains one of the possible adventure hooks to introduce you to this module.

Near the peaks, the outpost of the alchemist Skarvass (including explosions!) makes for the final stretch of civilization as well as an option for the PCs to stock up with special alchemical draughts that help with the dangers of high altitude – but not cold! Following the trail through the wilderness for a week, the PCs arrive at Vorn’s Gorge, where they have a chance to find a so-called mimetic crossbow, which allows the target of its shots to be the target of essentially a skill-theft – up to 5 ranks of a skill can be stolen and temporarily transferred to the crossbow’s wielder, but only for up to 5 rounds and only for one use of the skill. Furthermore, the skill, for its short duration, if it’s a class-skill for the wielder but no ranks, gets the +3 bonus. I’m not comfortable with this item. First, while the will-save to resist is harmless at DC 13, the flat-out -5 penalty to the respective skill-checks feels not particularly organic – if a foe only has 4 ranks, I think the penalty should only be -4 penalty. And while the maximum amount of skill-points transferred caps at 5, the ranks can, as written, break the level-cap of the user. While the item states: “The beneficiary of this enchantment may not have more ranks in a skill than normal via this enchantment (the target still suffers the penalty in skill ranks regardless of the bonus received by the user).”, this is still not a proper cap. Additionally, while only one skill may be thus scavenged at a given time, there is no limit on how many adversaries can be affected at a given time – stealing two times acrobatics from 2 rogues for 10 ranks would be possible in theory, though I think the intent was for no more than one skill being at any time transferrable via the crossbow. I like the idea of the item, but its execution is a tad bit wonky and could use some clearer wording.

Back to the module: Forging New Paths for PCs going off the beaten track is covered thankfully and sooner or later, the PCs will have to contend with a fiendish dire wolverine stalking the frigid peaks.  Oh, and an artificially-caused avalanche will have the PCs run for their lives, thankfully with an excessive table of how far characters can run (and possibly escape) the avalanche. Nice hazard! No time to breathe, though – the ice-trolls of the thickskin tribe make ready to attack the PCs and after (hopefully!) some fruitful negotiation, the PCs will find out that the brutes have suffered from the cursed peaks as well. But in order to end the curse that blurs the mountaintops, the PCs will have to ascend the Slopes of Madness. The way up these could be handled via various skill-checks (including flight) – or be supplemented with a cool idea: Have your players actually stack dice – fast! Success nets massive bonuses to the checks. Awesome idea and two thumbs up!

In Vornskall’s Pass, jets of freezing water, gargoyles and finally, Yalroth, the half-fiendish yeti offspring of Grualroth preside over tortured ice trolls being strapped to ice-made torture devices that litter the peak’s snow blood (depicted in one superb piece of full-color artwork). Defeating the dread spawn of evil ends the snowstorms and the descent proves to be rather anticlimactic. The pdf comes with one awesome map of the overall lands as well as 4 grid-studded maps of all encounter areas – all in full color.

Editing and formatting are very good, I didn’t notice any significant glitches. Layout adheres to an easy-to-read 2-column standard, broken up by one-column entries – a clearer line that sticks to the former would have probably made reading the module slightly easier, but I won’t complain about that. The pdf comes with a printer-friendly version and excellent maps as well as cool full color art, especially for the low price. On the downside, the module has no bookmarks, which is a detrimental factor in my book.

Author Mike Myler offers us a module that is an actually really good expedition/wilderness module, though one that could have used some random encounter charts for the uneventful interludes between the encounters. Still, the use of environmental hazards and cool variety of challenges make this a module that is very much…awesome. Seriously, there aren’t many good wilderness modules out there and Mike Myler’s evocative prose does quite a bit to add to the module’s appeal. Yes, the crossbow isn’t perfect, yes, some weather charts for dynamic weather and random encounters would have improved this further and yes, I don’t get why this has no bookmarks. The finale is also a bit anticlimactic and could have used more terrain – what about the prisoners flailing about, grabbing PCs? Ice slippery with blood? The making of a superb final encounter are tehre for the DM, but the module weirdly doesn’t develop them to their logical conclusion, opting for a more conservative approach.

But: It still is a great module for a price that is indeed a steal. While it has rough edges, I can’t bring myself to rating this down, also thanks due to the cool way to RL stack dice to improve the checks – genius and cool. Hence, my final verdict will clock in at 4.5 stars, rounded up to 5 for the purpose of this platform.

You can get this neat, affordable module here on OBS and here on d20pfsrd.com’s shop!