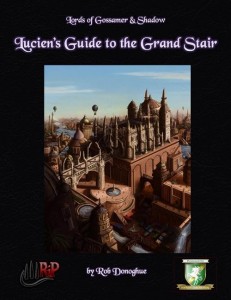 I LOVED Lords of Gossamer and Shadows – its imagery of this vast staircase with doors to infinite worlds resounding well with my tastes and sensibilities – here, then, we have an account of one well-versed in the intricacies of the Grand Stair, the rather powerful Warden Lucien, who guides us in a neatly written in-character prose through some of the weird and wonderful places of the Grand Stair. From the interplanar market place to the unstable (and lavishly rendered) rickety stairs and the starlit stair over to the labyrinth, Lucien provides accounts of his journeys and perils in prose so vivid, it’s a joy to read – and inspiring to boot!

But this is no mere travel journal – interspersed are subjective theories on the nature of the stair, its at times maze-like qualities, warnings against migratory flocks of pants emerging from one of the weirder worlds, etiquette regarding how to pass one another sans provoking a fight and even Rhen-codes further paint a picture both titillating and strange. Who are the Rhen? Well, legend has it they were the nomads of the stairs, long vanished to a fate none can ascertain – only their graphic codes remain here and there, relics of an age long gone. Lucien also has sound advice regarding ambushes (and their most likely goals) on the Grand Stair. How (and whether) and by what rules magic works on the Grand Stair is covered as well, with each cantrip coming with an incantation to actually say (AWESOME!) as well as Lucien’s notes on how to use them: 3 cantrips and 6 spells (one of which allows you to determine your subjective gravity), complete with lynchpins are provided for the traveler.

We also get a new 5-point power with “Walker of the Grand Stair” and 6 new lesser abilities – these represent components of a greater power, partial understandings etc. General hunches on destinations etc. become distinct possibilities. The pdf also introduces so-called expanses – these are mostly constant areas of the Grand Stair that can be attuned to a warder to varying degrees – either for 1, 2 or 4 points. Here, the pdf could have been slightly more precise – it is not 100% clear whether one needs to take the 1-poin attunement before the 2-point awareness or not, i.e. I don’t know whether one can directly go for the 4 point cost or not. I *assume* not, but the pdf does not specify, so that’s a minor blunder.

Cartas, the maps of the doors and the worlds they connect to, come also in 3 versions with point-costs, though, again, it is not 100% apparent if the point costs of them are cumulative or not, though here, I assume that’s not the case – otherwise you’d get 3 different cartas for the total of 7 points. We also are introduced to an annotated compilation of what Lucien considers the capabilities of teh Wardens of the Great Stair.

We end this book with two sample wardens who come with their own glorious artworks (from LoGaS) – the eponymous Lucien and his bodyguard/second n command Gretchen.

Editing and formatting are very good, I didn’t notice any significant glitches. Layout adheres to a full-color two-column standard with a purplish border . The pdf comes fully bookmarked for your convenience and the full color artworks, most original, one taken from the LoGaS-book, rank among the best you can find in any publication – yes, they’re that beautiful.

Author Rob Donoghue has crafted one fine supplement that could have turned sour VERY easily –  LoGaS’ appeal lies in its vast possibilities and a guide like this could easily have eliminated tantalizing possibilities in favor of “truths.” Instead of falling into that trap, this supplement explains truths, but relative ones, provides guidelines without prescribing things for DMs – this is the only way how such a supplement could have worked for a setting like LoGaS. Mr. Donoghue’s prose is vivid and clear and makes reading this supplement a joy, so that’s a significant bonus.

On the downside, I’m slightly irked about the point-costs of cartas and expanses. While I think the intent is mostly clear, the fact remains that here the wording could simply have been more concise. This, alongside the none-too-cheap price point are my only, minor complaints –  though they are significant enough for me to arrive at a final verdict of  4.5 stars, I don’t consider it enough to round down, thus rounding up.