EZG reviews The Genius Guide to the Talented Barbarian

The Genius Guide to the Talented Barbarian 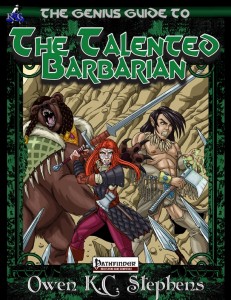 The first of the much-applauded “Talented”-treatments under Owen K.C. Stephens’ new Rogue Genius Games clocks in at an impressive 38 pages, 1 page front cover, 1 page editorial, 1 page SRD, leaving us with 35 (!!!) pages of content, so let’s take a look!

So let’s take a look at the class, shall we? talented Barbarians must be of non-lawful alignment, get d12, 4+Int skills, full BAB-progression, good fort-saves and proficiency with all simple and martial weapons and light armors. They also get a so-called edge at first level, 2nd level and then at 5th level and every 6 levels after that. Barbarians also get a so-called talent at 1st level and every level except 5th, 11th and 17th. Starting at 10th level, advanced talents become available and starting at 20th level, so-called grand talents are there as capstones. So far, so good – that’s essentially what you had expected after the previous installments of the series.

Now where things get really interesting is with the new level 1 ability Primal Reserve. A barbarian starts play with 4+con-mod points of Primal Reserve and adds +2 points. Primal reserve can be used to automatically stabilize. All core-resources that would increase rage rounds instead net primal reserve points. These, as you can imagine, make for the basic resource of the talented barbarian.

Generally, a certain type of ability-tree can be gleaned herein -while primal reserve powers all the rage-like edges (rage, cod fury, berserker and also savagery), only one can be chosen – savagery allowing btw. the barbarian to add +1d6 to ability/skill-checks based on two chosen attributes other than Int for a more canny/versatile adversary. Additionally, rage powers and the like can be used by barbarians with this edge even when not in rage. This makes for an interesting inherent design-decision, also by adding additional benefits according to the rage chosen – berserkers getting e.g. free proficiencies and the like. Skinwalking and the oracle-mystery-wildering totems also are part of the deal -and before you get out your power-gaming utensils – skinwalking/totems have a caveat that helps them not stack at the lower levels, but which still makes it possible to combine them, should you wish to. Skinwalking? Yep, essentially wild-shaping fuelled by primal reserve, opening a vast array of new character concepts. And before you ask – the ability is balanced re animal modes of movement and attacks, requiring higher levels to turn into predators and the like – nice! It should also be noted that barbarians are explicitly allowed to wilder in the rogue’s talent selection via a specific edge, increasing your potential arsenal even further.

Among the talents, armored swiftness, using improvised weapons, longer non-combat wild-shape, crowd control (with a caveat that addresses the problematic wording of the origin ability!), ignoring bad weather – rather awesome, very extensive selection, though personally, I had hoped the Titan Mauler’s ability to wield oversized weapons and one-hand two-handed weapons and all the confusion surrounding it had been cleaned up in a similar manner as aforementioned crowd control. Oh well, guess you can’t have everything. And before you ask – yes, rage power is now a talent as well, allowing you access to the list of rage-powers, which still apply their potential additional prerequisites. Have I mentioned the ability to use foes grappled as weapons to bludgeon others while in rage? What about rerolls of failed saves versus conditions upon drinking alcohol? Of course, totem rage powers are also included herein – with the totem edge (which may be taken multiple times) offering potentially access to multiple rage totem powers. Beyond the alignment-based/obvious beast totem powers, the fans of Midgard will surely enjoy the world-serpent totem powers or the hive totem, the latter of which is a godsend if your DM’s just as evil as yours truly and loves throwing deadly swarms at the poor melee characters after the AoE-spells of the casters are drained…

We also get an index that groups the respective content according to theme. Very interesting indeed – beyond the by now traditional advice on how to handle synergy between talented classes, we get essentially a suggestion called heroic warrior, who is a synergy of fighter, barbarian and cavalier for those who wish to play in all toolboxes sans breaking the game -really like that one, though a full-blown table for the class would probably have been nice.

Editing and formatting are very good, I didn’t notice any significant glitches. Layout adheres to RGG’s printer-friendly two-column standard and the pdf comes with thematically-fitting stock art and is EXTENSIVELY bookmarked with nested bookmarks for each edge, talent and rage power. It also comes hyperlinked to d20pfsrd.com, though not with the perfect bookmarks, but rather the automated ones – I doubt that customers require “GM” to be hyperlinked and more than once, I clicked by accident on a hyperlink, in the end printing this out to avoid just that. Oh well, at least the hyperlinks per se aren’t obtrusive.

Back to a more positive topic – the content. This takes the slobbering, wrath-filled barbarian and, as the intro suggests, separates it from the savage warrior, essentially allowing for non-raging barbarians from less urbanized cultures to civilized people who need anger management classes to shamanistic warriors that may slip in and out of animal skins – the barbarian as reimagined herein is much more versatile than the base class it inspired, offering much, much more in the variety of character concepts it supports – and that, ladies and gentleman, is why this one, much like the other talented classes before, now is the standard at my table. f problems can be found herein, they are minor at the very best and not the result of the class, but of the base archetype-abilities the framework took and adapted. And, let me emphasize this, even these minor hick-ups do not detract from the usefulness of this class in the slightest – final verdict: 5 stars + seal of approval.

You can get this cool version of the Barbarian-class here on OBS and here on d20pfsrd.com’s shop!