EZG reviews The Genius Guide to Feats of Spellcasting II

The Genius Guide to Feats of Spellcasting II 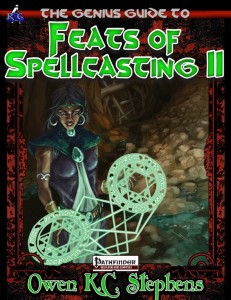 This Genius Guide clocks in at 11 pages, 1 page front cover, 1 page editorial, 1 page SRD, leaving us with 8 pages of content, so let’s take a look, shall we?

After one page of introductory fluff setting the scene, we read the first question that may pop into one’s brain -“Do we need more feats?” Unlike many other books, this one is not intended to fill roles in the rules or make some insane combo possible – it is made to provide fun options for the respective characters – and honestly, that’s a good approach. One crucial component of properly judging whether content will see use at my table would be that I require the crunch to properly supplement storytelling.

The first feat already points in exactly this direction -Arcane Blood allows sorcerors with damage-dealing daily-use bloodline powers to increase damage-output of said abilities by 2d6 per spell level for the expenditure of a first level or higher spell slot, balancing the increase in raw power with an additional resource-expenditure. This is a nice way to make bloodline abilities relevant at higher levels and increase a character’s focus on them. Receiving feedback to be able to perceive things in the area of a cast spell, even sans line of sight. What about a metamagic spell that does not harm good-aligned creatures unless specifically targeted at them?

Another feat allows the character to increase caster level randomly for specific schools of magic depending on the random constellation of the stars of the world. Or take a magus-feat that allows you to use spellcombat with 2-handed weapons, albeit with minor penalties to concentration when casting spells with somatic components. Powerful, but also a particular option that is absent from the base class. I’m not 100% comfortable with making the magus more glass-cannon-y than it already is, but I get the appeal of the feat. The same holds true for the feat that allows monstrous magi to claw, (and later also claw, bite) and cast – which makes for a nasty damage-output.

Witches can go for truly devastating combos with a new metamagic feat – Cackle Spells may take +1 spell level, but said spells may be expended via the application of the cackle hex. Ouch! Not all feats like this can be booked on the awesome side -a spellcraft check to deduce knowledge from targets damaged via acid-spells, for example, at least to me feels to meta, too disjointed, Temporarily getting both DR and fire resistance when using cold damage based spells and spell-like abilities. Now the thing that makes this one not easily abused would be the smart decision to couple the mechanics with the dice of cold damage dealt.

Making fetishes to slightly increase the potency of your magic also is a cool idea, if one that could have used a more powerful or unique representation – sympathetic magic has quite some potential and the execution of this one, with only a slight increase to DC against the target while being tied to gp-expenditure feels a bit weak for my tastes. Now making non-damage-dealing spells potentially permanent at five levels higher and be treated as a kind of curse is a cool idea – though there’s an issue here – the feat allows potentially for stacking and that can be problematic -while the intention is clearly to make the respective spells into kind of curses, as written, the feat can be used to rather easily and sans restrictions make buffing spells permanent. This feat needs further restrictions.

Establishing a link via touch attacks to channel further touch attacks also makes for a cool option, but one I’m pretty sure that can be broken – it is, anyways, a powerful tool, not only for attack, but also for healing and buffing purposes. Another potentially unpleasant beast being “Elemental Alloy”, which allows you to lace spells with the effects of your elemental spell feat, potentially transcending immunities and resistances, requiring the target to be resistant/immune to both. Potentially okay, but the feat does not specify what happens if a target is immune to one and resistant to the other energy type. The same ambivalence extends to immunity to one element and vulnerability to the other – the feat does not explain what happens then.

Adding templates on summoned creatures is a cool idea as well, though one a DM allowing the feat should have careful control over – the various templates that can be found out there greatly diversify summons and add a cool dimension, yes, but templates per se aren’t always well-balanced regarding the CR-adjustments. On the one hand, this is definitely a rule-o9f-cool feat, on the other, it requires an enlightened DM-player-relationship, so bear that in mind.

Immunity to one’s own fire spells on the other hand, now that is glorious and rather iconic. Temporarily changing magic/alchemical items or devices to suit your needs is another one of the candidates – while extremely iconic and limited by a significant restriction, we here have another one that’s great – if a DM and player agree on limitations. Using spell-trigger items a limited amount of times per day sans requiring spoken words makes for a cool option. Speaking of cool – making healing more efficient in non-combat circumstances makes sense and is mechanically sound.

Naming spells and making them more powerful also is one iconic options. What about making single-target AoOs with wands or staves. Potentially opting for average damage with spells also makes for an interesting option. Healing summoned creatures via summon monster, receiving a retributive strike or being able to be able to be revived from the dead by securing your soul in rings also can be achieved herein. The option to take out an eye for magical sight is also cool in its iconography, even if it could use better scaling.

The option to treat Spell Mastery-spells as arcane arrays that can be considered micro-lists of spontaneous spells also makes for a cool idea, further enhancing spell selection for arsenals of spells.

Making trap-like spells is also a cool feat -but where is the DC for rogues to disarm trap spells? Making excess healing applicable as damage to other targets also makes for an interesting option, mostly thanks to the daily limit. Extra lethal spells versus targets talked into lowering SRs and dual-activating rods also makes for cool ideas.

Editing and formatting are very good, I didn’t notice any significant glitches. Layout adheres to a 2-column full-color standard and the pdf comes with thematically fitting stock art. The pdf comes fully bookmarked for your convenience and also extensively hyperlinked.

Owen K.C. Stephens delivers a neat array of cool feats that truly enrich storytelling herein – though, admittedly, some of them offer this awesomeness at the expense of mechanics that are less precise than what one usually would see from RGG. Now do NOT get me wrong – the feats in this book are actually rather awesome and do offer a lot of cool options that truly allow for some iconic builds that aren’t supported by the vanilla rules. Still, this pdf, while exceedingly cool, also features some minor balance-hick-ups that keep it from coming as highly recommended as I’d love to do.

My final verdict will hence clock in at 3.5 stars, rounded up to 4 for the purpose of this platform.

You can get this thematically cool selection of feats here on OBS and here on d20pfsrd.com’s shop.