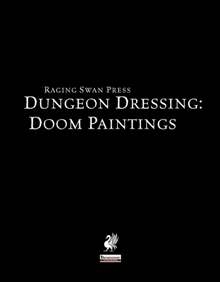 So…seriously? Doom Paintings? Painting generators seem like an endeavor that is futile from the very get-go, but author Mike Welham has time and again shown his talent for compelling supplements, so what exactly do we get?

Well, in case you didn’t know – a doom painting is one that depicts the final judgment, end of days etc. – with a part depicting heaven and another depicting hell. Obviously, most settings don’t feature trademark Christian iconography and this from the get-go, puts the supplement in a disadvantageous position. Why? Well, if you’re like me and grew up in a country predominantly influenced by book religions, you’ll probably won’t see it immediately. Think about it, though: What Manga and Anime taught me, is that from an outsider’s perspective, from the perspective of another belief, not only can the church’s history dark spots be damn creepy, the whole Christian religion can feel rather disturbing and its iconography is rather inspiring when trying to craft portents and organizations.

The installment’s first table contains 40 entries and each entry is rather lengthy, depicting one type of duality – from a Janus-like being, murals leading to either ice of fire and more complex entries: Take for example a hag shrouding a room with a blanket and subsequent people, with blankets over their heads, not realizing that the room is stuffed with corpses. Yeah. These paintings tend to also feature some rather nice, disturbing imagery here and there, though without becoming explicit. There is also a painting showing a hidden path through some kind of elemental purgatory (including a Perception DC) and several triptychs are also featured.

Now this would not be the dressing-series, were it not for an additional table, this one sporting a total of 64 entries of details to modify the paintings further – whether by scribbled warnings on the back, weird places where the paintings can be found or by composition: One of the paintings is made up out of tiles that are currently jumbled, whereas others feature hidden sheets of paper or are held aloft by clockwork butterflies (!!!). Of course, paintings with magic mouths and screams emanating from them also feature among these modifications, which come with several pieces of rules-information in the case of more complex entries. Take aforementioned clockwork butterflies – we actually get Ac, hardness and hp for them! Nice!

The final 2 pages of the installment are devoted to 5 new traps covering the grounds from Cr 2 to 13 and coming with Raging Swan Press’ trademark trap-complexity, i.e. not simple one-round traps, but multiple rounds/effects and non disable device means of bypassing some. Take aforementioned elemental path – essentially, if you choose this painting and combine it with the elemental path trap, you get a whole dungeon room/mini puzzle – and that, my friends, is awesome. There is also a rather nasty painting of combined spell-like abilities that makes for a twisted variant of the painting-sucks-you-in-trope. Or take a painting of a beggar, which blesses the generous and punishes the stingy? Oh, and there’s a VERY unpleasant hallway trap here as well – each, btw., tied to a specific doom painting, as befitting of this installment’s topic.

Editing and formatting, as we’ve come to expect from Raging Swan Press, are stellar – I didn’t notice any glitches. Layout adheres to RSP’s printer-friendly 2-column standard and the pdf comes fully bookmarked and in two versions, one optimized for screen-use and one to be printed out. The piece of b/w-artwork featured is familiar to those who have checked out Shadowed Keep of the Borderlands and still is awesome.

I’m honestly impressed – author Mike Welham has managed to create what, by the first impression, could have easily turned out to be a massive failure. Instead, we get extremely inspiring dressings that evoke wonder and make a DM come up with rooms, puzzles and even whole plotlines, supplemented by nice traps and DCs here and there. From the easy to integrate entries to the interspersed entries of weirdness, this installment offer something to the down-to-earth gritty faction as well to aficionados of the weird, all in a superb example of the art of concise writing: How much has been crammed in these pages is impressive and has me clambering for more – I wouldn’t mind a direct sequel. My final verdict will hence not surprise anyone – 5 stars plus seal of approval. get this – it’s perhaps the best installment of the series so far.

Get this superb installment of the series here on OBS or here on d20pfsrd.com’s shop!