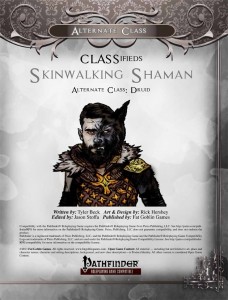 This alternate class of the druid clocks in at 7 pages, 1 page front cover, 1 page SRD, leaving us with 5 pages of content, so let’s take a look, shall we?

Instead of nature’s bond, skinwalking shamen [sic!] can choose a domain from a limited list, but only receives the domain’s powers, no bonus spells. Furthermore, the shaman is treated as a full BAB-class for a round in which he only attacks with natural weapons/unarmed strikes. This replaces nature sense. Instead of a common wildshape, skinwalking shamans learn to turn into one specific creature from a list of 8 different choices for 1 hour/level (which should probably be class level…) and at second level and every two levels thereafter, the archetype gets +1 use. Now I *assume* that both the daily number of changes and time limit fracture in as limiting factors – if the time limit resets after every change, it becomes quickly rather meaningless. A nitpick, yes, but still – clarification would be nice. On the plus-side, the lineages do come with suggested sample creatures to wild-shape into.

Now you also need to know that you can choose a lycanthropic heritage, which locks you down to one form, or go with a non-heritage skinwalker who can freely choose each time, but if you do choose a heritage, at 4th level, you are treated as +2 class levels higher for purposes of proper wildshaping. Now as much as I do like the base ability, it breaks one of the balance tenets inherent in Pathfinder that is easy to overlook – turning into small bats at 1st level allows you to bypass the prohibition against low level unassisted flight, which usually only becomes available a couple of levels later. Whether that is an issue for you (compare the flight-hex, which only allows for flight at 5th level, for example!) or not depends, but for me it does present a balance hick-up.

Instead of wild empathy, skinwalkers may influence lycanthropes. Instead of resisting nature’s lure, skinwalkers learn to enhance their concentration on new moons and improved bestial prowess on full moons – nice idea, though moon phase tracking may become annoying. It’s also a slight shift from the established design paradigms regarding lunar ties, which usually penalize characters at one point – though this time around, I actually don’t mind this: Penalizing some days means that players will try to avoid doing anything then, which isn’t fun for anyone. As far as I’m concerned: Okay, if perhaps a bit paper work intense. Now to pay for the increased physical prowess, skinwalkers only learn prepared spellcasting via wis at 4th level and only get up to 6th spell level.

High level skinwalkers get lycanthropic DR, immunity to diseases and finally, full-blown lycanthropic ascension as a capstone. As a minor downside, it should be noted that 17th level is almost a dead level, with only a level 4 spell gained – which, at this point, won’t impress anyone.

Editing and formatting are solid, if not perfect. Layout adheres to Fat Goblin Games’ beautiful two-column full-color standard ad the pdf comes hyperlinked with the good type of hyperlinks for your convenience. The pdf has no bookmarks, but needs none at this length.

Tyler Beck’s Skinwalking Shaman is an interesting alternate class – one focused on melee and on paper, it doesn’t look bad. Where balancing imho gets wonky is as soon as you play an heritage-less shaman – the choice and flexibility are very strong, especially seeing how many animal abilities like Trip (Ex) or Grab (Ex) usually outclass the respective feat options available for regular characters. Add to that the nerfed, but not neutered spellcasting and the full BAB when in beast form and we have a class that is too strong. Think pouncing barbarian with spellcasting. Yeah, you get why I consider this one too strong. I’ve seen what claw/claw/bite full BAB-characters do with opposition, even sans animal bonus abilities. Let me tell you: Not pretty. And yes, claw, claw, bite doesn’t work easily here, but the animal abilities do somewhat offset that…AND you can get claws and bites via feats and races… So personally, I think this class is too strong for most groups. Then again, it is not utterly broken and while some abilities could use clarification, the overall writing is relatively solid.

My final verdict will hence clock in at 2.5 stars, rounded up to 3 for the purpose of this platform due to the low price and the fact that for some groups, this will work.