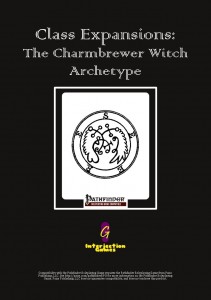 This installment of the Class Expansions-series is 5 pages long, 1 page front cover, 1 page SRD, leaving us with 3 pages of content, so let’s take a look, shall we?

Brewing witches are iconic indeed – but so far, the support for that component of a witch is rather sparse – this archetype seeks to change that: On a basic level, the archetype mostly replaces witch hexes with fixed ones – at 1st level cauldron, at 4th the witch already gets the witch’s brew major hex. Starting at 10th level, charmbrewers may create +1 elixir when having access to their cauldron and additionally create these elixirs sans access to his/her cauldron.

“Wait, what?” you say: “What are elixirs?” Well, elixirs are quite close to what you’d expect in mythology – they are draughts that you have to trick people into consuming: If you try to force these down the throat of others, they lose all potency and even if you’re sneaky about it, the imbibers already get +4 to their save versus 10+1/2 class level+int-mod to avoid the elixir’s effects. Charmbrewers learn an elixir at the second level, at 6the level and every 4 levels after that. A charmbrewer may have as many elixirs with him/her as they know recipes – i.e. at 6th level, a charmbrewer could carry 2 elixirs per day since she knows tow recipes.

We are also introduced to another new concept, so-called thaumaturgic connections that are required for certain elixirs – these need to be personal effects – cherished talismans, a lock of hair of a deceased love, you get the idea. If the connection is weak, the elixir incurs a 20% failure chance. On the plus-side, such a connection is not impeded by space – only planar travel can save you from the established bond.

A total of 21 such elixirs are provided over the following two pages of content, with some of them requiring a base level to access them – so for example borrowed locomotion, which allows a charmbrewer to pour an elixir on an inanimate object at twice her class level, becoming rigid herself and perceiving things through said animate objects via an empathic link. This would be awesome per se – but one big gripe I have with this one is that the animated object only offers an empathic link – at level 18 when this becomes available, the elixir should allow for scrying/espionage etc. – as written, it essentially is a very strong animate objects-spell (at least CL 36 – OUCH!). Also, the ability has one weird caveat: “Unlike the animate objects spell, spells animated in this fashion are animated for 1 hour.” I assume the animated things should read “objects”, not “Spells” – unless there is a way that allows this to make spells go awakened arcana that has been neglected to be mentioned.

Buffered Life is nasty – when imbibed by two, one is the recipient of all the damage the other individual incurs – but only from damage that would otherwise kill the protected being and only once per elixir. I’d be screaming death and destruction right now were it not for the limits imposed by the elixirs themselves, the level restriction (10th, btw.!) and the fact that the elixir requires a thaumaturgic connection. One thing I’m not sure about: Is the damage-type retained by this transference? When e.g. the protected character would die due to a flamey dragon’s breath death and the protecting character is immune to flame, would the protecting character suffer the damage or not? Other than that, a very cool idea. High-level charmbrewers may also make an elixir called Curse of Midas, which turns the imbiber into Pyrite. How consent can be gotten here knowing the repercussions, I don’t know, but oh well – it is hard to break, requiring wish or miracle to transform back. What’s a bit unfortunate here is the nomenclature – it’s called “Curse of Midas”, but as per the writing, it’s neither a polymorph effect, nor a curse – specifically pointing that out would be helpful in my opinion since there are some beings out there that are immune to polymorphing effects.

We also get elixirs to improve attitudes (or worsen them), sowing strife or love thus, make one individual lose temporarily an attribute point (more at higher levels), conferring it to another creature. What happens if a frail creature on the death bed loses its final constitution point thus? Is the bonus retained? I know said example is extreme, but I’d consider it kind of awesome…

Another great high level elixir would be the Fatespin Elixir – more nitpicky even than others, it requires full disclosure: For a reason: one of the recipients needs to have recently perished. The second imbiber dies, whereas the first one is returned to life. Story-telling gold: An elixir that links the life of two individuals: Also only accessible at 18th level, if one of the two dies, so does the other. There also is an elixir that heals one imbiber for class level 1d4 while damaging the other participant for the same amount of damage and one elixir that heals/deals damage over multiple rounds, as is there one that allows one subject to be protected from poisons, curses or diseases, making the other target incur them instead – but again, what if one of the recipients is immune versus the incurred effect? Does s/he still get e.g. the con damage? What if one is undead or a sentient construct?

Exchanging skills (with a typo “if he lass” should read “if he has”), making a healing potion that can also neutralize poisons, remove diseases or break curses (but only one of the bonus effects…), brewing an elixir which nets you a massive boost to initiative when attacked by the recipients of it, exchanging 10 years of life – all possible, though the latter, depending on the elven population of your setting, should be carefully considered, lest we get a scenario à la “In Time” where you may buy time as a currency.

Phantasmal Poison is also interesting – it is a poison that actually is an mind-affecting illusion, fooling those who feel that they succumb to it – and their immunity. Predisposed to teaching cocky PCs a lesson in humility. We also get an elixir that prevents resurrection, a panic induced elixir, craft dreams in a bottle, force others to take 0 on all bluff checks and a penalty of class levels to it or ward a creature against one curse, regardless of caster level.

Editing and formatting are good, though not perfect – I noticed a couple of glitches and wordings that could have been a tad bit more precise. Layout adheres to Interjection Games’ nice two-column standard in b/w and the pdf has no bookmarks, but needs none at this length.

I really, really like the concept of this archetype. The elixirs are a great idea to get some very “witchy” flair in here and make for interesting, valid choices – if your campaign is roleplaying heavy and offers room for such. Again, personally, I LIKE crafty options like this that make you think on how to use them – but not all is well: While e.g. it can be inferred from the level 10 ability, a witch requires a cauldron to make these elixirs – at 10th level, she doesn’t anymore. Cool. But the basic elixir ability fails to specify that the archetype required the cauldron in the first place – so what we end up with is a tad bit more obscure than it could have been. What’s a bit weird from a design perspective is that the charmbrewer almost foregoes all hexes: Two, as mentioned, are fixed and elixirs etc. supplant all the others – with the exception of the one gained at 12th and 16th level. Weird, at least to me. With such a limited selection, why not go full-blown elixir?

I also would have liked a unique capstone – and simply more elixirs. 3 are available at level 18+, 5 require level 10+. While mimicking the scaling of hexes is a good idea, why not clearly call them Major Elixirs, Grand Elixirs etc.? It would imho have made the structure of the elixirs easier to grasp and be analogue in nomenclature to established material. Beyond that, I do feel that we could have used a tad bit more on the content side – giving up the hexes, supplemented by x publications so far is a serious incision, one I feel the elixirs can’t really remedy – simply due to being very inflexible and requiring a lot of preparation. One final nitpick I have to muster: It is nowhere stated what action chugging an elixir is – I assume the same as drinking a potion, but I’m not sure from the ability’s write-up.

Now don’t get me wrong – all these gripes are essentially nitpicks – but they do accumulate. This is by no way a bad supplement and can serve a very interesting role in your campaign and work wonders as DM-plotdevices. In the end, this one suffers beyond its minor incongruities most from simply choosing the wrong format for what it sets out to do – the charmbrewer would have made a much more compelling variant witch that replaces her hexes with elixirs, with perhaps 3-5 pages added, but as an archetype it feels just a bit off in the details – not bad, but off nonetheless. The minor ambiguities here and there just add up to a point where I can’t rate this higher than 3 stars.

You can get this interesting archetype and its cool brews here on OBS!