EZG reviews One Bling to Rule Them All: Scaling Magical Items

One Bling to Rule Them All: Scaling Magical Items 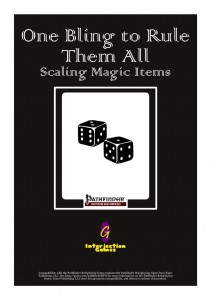 So what is this pdf all about? well, first of all, it’s about being against the magic item Christmas tree-syndrome – and about making magic items feel more magical. These items actually increase in power over the levels of the wielder. Scalars detect as all schools of magic at once and, if required, treat their CL as = HD of the wielder. Each scalar uses a body slot -close proximity is required for the peculiar attunement these items require. Scalars attune themselves to a master and maintain a stubborn loyalty to function only for this respective individual – until a lot of time has elapsed. Now to maintain the allegiance of a scalar, only casual contact is required. As you can imagine, actually using these items if you’re not the master turns out to be rather difficult. – properly “hacking” a scalar requires quite some mastery in using magic items – and the process is actually explained in a rather smart way, providing a great explanation that actually makes sense. Auras et al also are provided – generally, scalars receive 2 Level 1 abilities, 2 from the level 5 list, 2 from the level 10 list, 1 from the level 15 list and 1 from the level 20 list. Oh yeah, scalars are jealous, so no multiple items.

Now the grand thing here is that this toolkit thus allows for relatively easy modification. However, that is not where scalars end – upon attunement, a master receives ranks to use with the scalars, equal to the amount of HDs of the respective master. The ability lines tend to have a required array of ranks – to e.g. unlock an ability that requires 4 ranks means that other abilities require a total of 4 ranks invested in other abilities. The abilities of scalars, unless otherwise noted, do not provoke attacks of opportunity.

Now scalars change the dichotomies of a given campaign’s magic item-density and hence, they do come with an improved WBL-table that takes their impact on a group’s power-level into account…and checking this one took ages, but the table actually is sound and should result in no change of power-level – which is exceedingly awesome for especially balance-conscious groups. Now introductions of new items/systems would be solid on the value of crunch alone, but thankfully, some cool, fluffy suggested origins for the genesis of scalars help provide DMs with inspiration in that department as well.

Now the base system out of the way, let’s take a look at the abilities, shall we? There are offensive and defensive abilities, those that are constant and some that have a limited amount of uses per day – but it’ll be easier to grasp if I just mention examples – Arcane Bulwark, for example: this level 1 ability nets you SR 5 +number of ranks invested. Or what about an ability that increases the amount of HD of undead a necromancer can control at a given time depending on the amount of ranks invested?Cones and lines as draconic breath weapons, increased skill prowess or movement rates, being hard to swallow, increased carrying capacities – the effects are diverse and interesting and yes, winds that impede ranged attacks – the respective abilities do provide interesting, nice options that thankfully do not just rethread old effects.

The level 5 abilities become even more interesting – take alchemical ammunition: This one actually nets you a pool of points you can use to supplement the power of the respective base items. Essentially, the points of this ability allow the wielder of the scalar to imbue ammunition spontaneously with the effects of alchemical items. Or what about being able to cook creatures slain for bonuses? Even relatively boring abilities tend to come with an interesting twist – swim bonus? May be nice. But how cool is actually getting a proper swim speed once you’ve invested enough ranks in the ability? Yeah, that’s what I’m talking about.

What about wildering among revelations? Hexes? In a neat twist, these scalars allow not only the proper codifying of core abilities, they also provide support regarding the more uncommon class options. Of course, 1/day rerolls with luck bonuses equal to invested ranks, regenerating poison, ooze alliance…the abilities are cool. And some actually made me grin – take DR against traps, aptly named “Barbarian Trapfinding” – or what about 1/day per rank halving environmental damage. Spellcasters can have elemental energy-spells and effects enhanced. And yes, better escape velocity can also be achieved.

At higher levels, scalars can make your pores excrete acid as a response reaction to being hit, generating short-range swathes of acidic mist. Alternative options would be to overcome spell resistance, increase the inertia (and base damage-dice) of a given weapons. Rather unique – rolling an asserted, increasing amount of dice at the beginning of the day and recording the result; Once you roll the type of die during the day, you can replace the roll with the recorded die-roll. Now the capstone-abilities…are brilliant. Take “Abnormal Paranoia” – this one laces ALL scrolls you generate automatically with explosive runes. What about making your scalar a remote antimagic field that does not impede the functionality of the scalar? Or perhaps you’d prefer a material component-less raise dead or ranged attacks that may ricochet. Vampiric bonus damage that heals you also is one of the possible capstones…

Editing and formatting is very good, I noticed no significant glitches. Layout adheres to Interjection Games 2-column b/w-standard and the art is thematically fitting stock. The pdf comes sans bookmarks at this length, which is a slight comfort detriment.

Bradley Crouch offers us a great system here – one that provides some cool, unique benefits, customization options for the respective players to enjoy – so what’s not to like? Indeed, the help for DMs regarding WBL, the way the benefits scale – all of these conspire to make scalars a unique, easy to grasp system of nice choices that should not unhinge any game, while at the same time fighting the magical supermarket syndrome – and it involves the players to an extent absent in more mainstream magical items! Over all, a great, modular system that can be expanded easily by just about any DM and which most certainly would benefit from future expansions, whether made for a given home-group or in the guise of additional pdfs. Over all, a great pdf well worth of 5 stars + seal of approval.

You can get these cool items here on OBS!

Want to have master Crouch design your very own alternate class, PrC or the like? Well, he is currently running a kickstarter and you can actually get exactly that! So check out Strange Magic here!