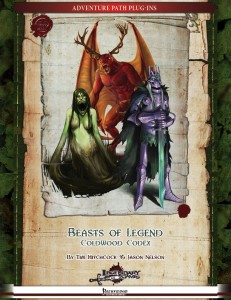 This bestiary for the Kingmaker-AP is 35 pages long, 1 page front cover, 1 page editorial/SRD, 1 page how-to-use, 1 page SRD, leaving us with 31 pages of content, so let’s take a look!

First, we get a page of introductory text and after that we dive in – here’s a peculiarity of the book: Each entry of a monster comes with a one-page massive full color artwork as well as a read-aloud text to properly portray it, offering essentially some awesome hand-outs to show the players. And we kick off with the CR 13 Amadans – saggy, somewhat maggot/mole-like fey that can only be seen by those under a curse: As these disturbing fey are creatures of pure unluck, they come with a rather lethal accelerated aging curse, can weep accursed tears and shroud themselves in stolen luck. Rather awesome!

The second critter would be the Bokereyder, a CR 2 goat-like humanoid fey who can ride goats and turn domesticated animals feral with a gaze. Oh, and they come with stats for feral goat companions.

On the others die of the power-scale, there is the massive CR 18 Chernobog-fey, which are almost demonic-looking foes of the divine, impeding the connection of casters to their deities and offering a massive area of control about plants. Worse, these dreadnoughs may implant iron thorns into foes , making them rise as an undead-like servitor once the deadly seed germinates.

The Faleich-wyrm, at CR 13, is an undead tatzylwyrm also have an interesting angle – apart from their breath weapon, they are also hosts to hordes of leeches that transmit maddening murderous commands. Disturbing!

The Naekk, a CR 7 shapechanging fey inhabitant of bogs and waters are a fey water spirit that may emit despair-inducing wails and the bites of their unhinging, sharp-toothed  jaws may go phantasmal killer on their victims – especially unpleasant since they may fascinate foes. Cool creature, though honestly, I think we have enough alluring/disturbing water-fey.

Sloughs (the example coming at CR 14) are druids who have forsaken their paths and now sap the vitality from the land. They come with a withering curse, rejuvenation, a stench aura, undead wild shapes and their template clocks in at CR +2. Can you say “defiler lich” with me? (Dark Sun fans should be smiling…) Well, almost – their magic per se does not blight the land – a minor lost chance here.

At CR3 the Totemoq are some of the weirder creatures I’ve seen in recent time: Tiny bodies with oversized totem-mask-like heads, these fey of winter roam the frigid wilds, luring travelers to their doom via their nonlethal cold sighs while being cloaked in protective whispers and snow.

The Ugrother, an undead pixie-like fey at CR 5 fights with needles imbued with spell-like abilities and may use weapons usually not suitable for their size – nice one, especially when combined with redcaps…

Barrow Wights are yet another new undead, this one having the only artwork in the book I wouldn’t consider stellar and only good – at CR 11, these undead are driven by greed and may locate treasure stolen from them and haunt the dreams of the grave-robbers. They are lawful, though, so negotiation might actually be an option.

The Boreal Wight (at CR 4) has perhaps one of the best artworks I’ve ever seen for a monster – overgrown by prickly vines, they may embrace foes and root themselves with them, fuse with trees to replenish their life and unleash deadly needlestorms. Awesome!

The pdf also features 3 pages of cardstock-minis that cover each of the creatures herein.

Tim Hitchcock and Jason Nelson are talented designers – thus it should come as no surprise that this pdf, in the best of Legendary Games tradition, is all killer, no filler – there indeed is not a single creature herein that feels like it’s uninspired, boring or bland – they all BEG to be used. With sharp implements held to your face.

Sooo…the price-point. Someone’s gotta address the elephant in the room. Yes, this pdf is not cheap – especially when adding toner/ink-cost, for you’ll want to print this out. BUT. And this but deserves its capital letters, I consider this pdf well worth every cent. Why? Because these critters come with more fluff, with superb production values – whereas I buy Paizo bestiaries mostly for crunch and not inspiration (I prefer the chronicles-books for exactly that reason and love those to death), this pdf’s monster-entries not only feature multiple signature abilities and superb artworks, they also come with deliciously-inspiring fluff that goes beyond what Paizo can offer in their bestiaries – and this, to me at least, vastly increases the value of this book. Dripping old-world flair and oozing not only Kingmaker-compatibility, but also feeling right at home in e.g. the Margreve or the Midgard Campaign Setting, this bestiary once again manages to cement Legendary Games’ status as one of the companies that just doesn’t seem to be able to fail – worth every cent, brimming with imagination, this is well worth 5 stars + seal of approval.