EZG reviews B16: The Damned Souls of Fenleist

B16: The Damned Souls of Fenleist 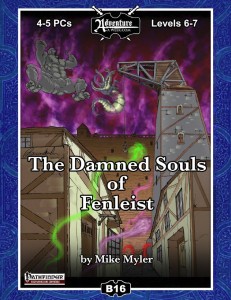 This module is 60 pages long, 1 page front cover, 3 pages advertisement, 1 page editorial/ToC, 1 page back cover, leaving us with a total of 54 pages of adventure, so let’s take a look, shall we?

All right, still here? The town of Fenleist is characterized by two things – on the one hand its booming lumber industry and on the other a propensity for weird occurrences: Said occurrences have baffled church hunters and worse, have steadily grown – from mild annoyances to actual undead threats stalking the streets at night. A hefty reward should help entice players into checking out Fenleist…but what exactly is going on? Well, the story here is a rather complex one to say the least: The first apex of the strange occurrences saw bodies dug up and flayed – this had been taken care of by the intervention of one undead hunter named Doroi Tavskern – who has been busy since with the undead roaming the street. Hereafter, no less than three adventuring groups “The Intrepid Trio”, “The Devout Protectors” and “The Wayward Swords” have failed to put an end to the slowly escalating undead threats. As so often, the riddle’s solution lies within the past of the settlement: When the founder of the village located Rassdradden Ruins below the town, he went there with a group of adventurers. Only one survived, one wizard named Tarryndorn – tainted by the planar conjunction of the necrotic nexus buried below the town, the mad wizard now plans to shatter the very boundaries of the planes for an insane chance of an apotheosis. Now Doroi is not suffering from incompetent NPC-syndrome – the poor inquisitor has been tricked by Tarryndorn and via a charmed amulet, turn unwitting spy of the wizard. Worse, the scheming arcanist also has turned a survivor of the failed adventuring groups into a well-concealed undead spy among the ranks of Fenleist’s citizenry…

The city of Fenleist is lavishly mapped, but the pdf makes a weird turn on the page of the map – it is depicted much like a landscape-style 2-pahe spread, which yields slightly unpleasant results when printing this particular page out. The PCs arrive in the glorious town of Fenleist, known for its huge landmark crane, on noon – and action: Immediately, the pastoral idyll is shattered by an eclectic array of deadly creatures from all across the planes (which is not made easier by the strange impediment of souls not being able to pass on to the afterlife!)! Here, a particularly interesting feature should show up – the pdf actually not only offers variants of the creatures in 3.5 and PFRPG, the encounters actually differ: First of all, the creatures and NPCs are more complex than you’d expect. Secondly, even the read-aloud texts reflect these variations -kudos for stepping up the dual-rules format in here! Upon dealing with at least the immediate threats, the PCs are briefed by Constable Vandersmythe. The detail here is really neat – e.g. the swarms among the foes can be optionally handled by AoE-challenged via helpful NPCs and even via utilizing the crane to squash the swarm via the especially valuable and hard timber here in Fenleist.

The following investigation is rather complex –  and sooner or later Tarryndorn’s agent tries to sell cursed items to them that allow the wizard to spy on them and squeeze them for what they have unearthed so far while feeding them half-truths and banal pieces of information. Worse, the rather uncooperative inquisitor is fed suggestions by Tarryndorn – if the PCs try to follow the suspicious hunter, they’ll run right into a vast squad of undead and will have to contend with the inquisitor to boot – hopefully without killing him. Should he survive, alas, he’ll not be more of a help – he has just lost a decade worth of memories…. Upon the return to the town from the cemetery, the PCs may be hailed as heroes… but they’ll also witness a magical wave that they can triangulate towards its origin, an old oak (which is actually a stone-replica of a tree!) that hides the entry to aforementioned ancient ruins. Now old-school legwork searching may also yield the entry to the place, as does entering the rather lethal magical subterranean machinery of Fenleist’s landmark crane (though the latter is situated in the beginning of the module and would have been imho better placed here, but that’s a personal preference and hence nothing that will influence my verdict) – both come with their very own challenges. In order to gain entry, though, the PCs will have to brave  Rassdradden Reach, a vast chasm 500 ft. over an underground lake – and while balancing across the narrow pathway spanning it, of course a deadly adversary attacks – a sorceror in 3.5, a neat summoner-build in PFRPG: The second creature, by the way, that comes with a mini racial variant in 3.5!

Rassdradden Ruins is a terrifying complex – patrolled by mhorgs and crysmals, though beyond the grisly remains, that is not all – take an ifrit monk with exponential shurikens that double after travelling for ten feet, for example – or what about former adventurers turned into undead guardians of the wizard (and we all know how dastardly well adventuring groups can screw you over!) and finally defeat the crazed elven wizard…that’s not where the module ends, though – in order to find the missing “Wayward Swords” and end the threat of the conjunction, the PCs have to deal with one of the coolest puzzles I’ve seen in this generation of adventure modules – an origami-glyph-puzzle supplemented by 3 puzzle-sheets! And yes, you may just skip this part with a roll if that’s your preference, but oh boy would you miss out! Two thumbs up for this cool, creative puzzle! Opening a planar rift, the players can jump into the rift to come out on a miniature planet, where the missing adventurers…as well as Fizzlewick, the legendary creator of the crane and founder of the town are imprisoned! Saving these guys should add even further adventure hooks and indeed, mark the beginning of a new era for the town!

Editing and formatting are very good – apart from the double-page spread and some very minor glitches, I did not encounter any that impeded my understanding of the module. Layout is beautiful indeed – taking a cue from the vastly improved layout in the Pathmaster-modules, this book’s parchment backgrounds and full color artworks are joys to behold indeed. The pdf comes fully bookmarked for your convenience and with 2 player-friendly versions of the maps (the town here is in portrait format, so in doubt, just print that one) and the puzzle-sheets are also rather cool to see in such a supplement.

Author Mike Myler has created something ambitious – a free-form, complex investigation with an intelligent antagonist and intriguing builds as well as iconic places and challenges await. Now mind you, this is no module for inexperienced DMs – why? Because the act of investigating the respective happenings and the transitions from scene to scene need some fleshing out by DMs to make the adventure properly work – that does not mean that it is too sparse in its information, just that…well – let’s not mince words here: This is hard to run. Primarily not because it is confusing, but rather because it feels unorganized. DMs are expected to carefully sift through the text and deduce what the PCs are supposed to uncover – essentially, this module gets a bit lost in its own sandboxyness.

Partially that’s due to e.g. the crane’s exploration being introduced at the beginning (when it’s essentially a potential penultimate locale), partially it’s due to a relative lack of straightforward clues – e.g. the magical wave, while a great idea, feels a bit clunky here. Making that one a near-constant phenomenon and then offering more complex means of triangulating its origin (ones that the PCs can slowly unearth) would have probably made the module feel a bit less disjointed. The locales and story-threads and even how they’re interwoven – all that is rather intriguing and indeed worthy of 5 stars +seal of approval, but their connections to one another feels overall rather flimsy. A tighter synopsis and a more structured event-flow would have catapulted this module up to the highest honors. As provided, it offers awesome locations, cool adversaries and a complex mystery, but also requires significant work from DMs to make the events flow naturally. Hence, my final verdict will clock in at 4.5 stars, rounded down to 4 with an express recommendation for experienced DMs to try their hand at this one – I know my players will be all over this module! Author Mike Myler has improved at a rapid rate and if this module is any indicator, one should definitely look forward to his future offerings and keep an eye on his rising star!

You can get this challenging, nice module here on OBS (also in print, btw.!)!