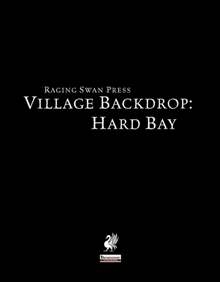 The latest installment in Raging Swan Press‘ superb selection of villages is 13 pages long, 1 page front cover, 1 page advertisement, 2 pages of editorial, 1 page ToC/foreword,1 page advice on reading statblocks for novice DMs, 1 page SRD and 1 page back cover, leaving us with 5 pages of content, so let’s take a look, shall we?

Hard Bay once was a pirate nest – with its sheltered harbor and plentiful fishing grounds, it has all the markings of a village destined for greater things. Since three noble families have been instated here alongside a productive metalworks, the town is affluent, though not overtly so and the Blufonts, Moisans and Gerous have their impressive mansions in the village and while the strange keeper of the light house may seem odd and the drunk head of the metalworks often tries to get strangers to leave, all seems to be relatively well here.

Well. It isn’t. There’s something distinctly WRONG with Hard Bay – something that is represented in the statblock provided. Something in line with the bonfires that can be seen on new moons and the whispers and rumors distinctly hint at something lurking beneath the town’s relatively pleasant exterior. And no, I’m not going to spoil here what the deal with this town that feels a bit like Sandpoint’s evil twin to me, is. Suffice to say that from village statblock to lore and marketplace and yes, even a template, we get all the information we could ask for.

Editing and formatting are top-notch, I didn’t notice any glitches. Layout adheres to RSP’s crisp 2-column b/w-standard and the pdf comes in two versions, with one being optimized for screen-use and one intended for the printer. The town’s map by Thomas Fayen is great, as always in the series and can be downloaded in a player-friendly version on RSP’s homepage. The pdfs come both fully bookmarked.

Author Greg Marks creates an interesting town with a subtle air of threatening things, a subtle wrongness here. That being said, the idea behind the town, while distinctly well-executed, also feels a bit less original than I’ve come to expect from the series – the basic theme herein has been executed in quite a few villages/modules by now and while it manages to put its own spin on the yarn woven, in the company of its extremely well-crafted brethren, it feels a tad bit less original than e.g. a certain xenophobic village deep in the forests of the lonely coast…

Now don’t get me wrong, there is nothing wrong with this supplement – it’s a great offering and the decadent noble families feel distinct and full of narrative potential. Still, overall, it feels slightly less captivating than some of the best Village Backdrops. My final verdict will hence clock in at 4 stars.

You can get this neat settlement here on OBS and here on d20pfsrd.com’s shop!