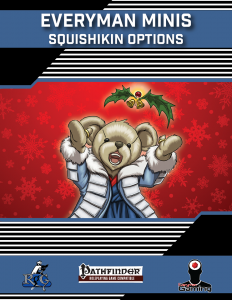 This Mini, exclusively available as part of the Klickstarter bundle, clocks in at 7 pages, 1 page front cover, 1 page editorial, 2 pages of SRD, leaving us with 3 pages of content, so let’s take a look!

The introduction-page recaps what a squishikins is (basically, a construct that became sentient by intense positive emotions), with a cool sample fluff write-up, Biddle Bear, provided.

(And yes, you should get the amazing Everyman Mini: Squishikins – they’re awesome, and I assume familiarity with the race here.)

We begin with 6 new alternate racial traits, the first of which would be Abnormal Facsimile, which lets you make aberration (+2 racial bonus to saves vs. disease, mind-affecting effects and poison), constructs (Great Fortitude), dragons (30 ft. fly with clumsy maneuverability, needs to end flight on floor or fall until 7 ranks Fly are gained), fey (+2 racial bonus to saves vs, enchantments and illusions as well as treated as having the Combat Expertise and Intelligence 13+ for Improved combat maneuver feats), ooze (Toughness) or outsiders, choosing subtype from elements/alignments and gain +1 to saves and AC versus the subtype chosen. Basically, this doubles the options presented by facsimile. Alternatively, a squishikin can have a unique form, which translates to a bonus feat chosen from a list.  Emotional awareness nets Sense Motive as class skill and 1/day detect thoughts as an SP, replacing astute senses. These may also be replaced with Skill Focus (Diplomacy) and the skill as class skill, +2 if the skill is already a class skill, and a 1/day roll twice, take the better result option.  There also is an option to be Medium instead of Small. All of these are well-crafted and precise in their equivalent exchanges.

The pdf also contains a pretty meaty archetype – the misfit toy antipaladin! Yeah, you heard right! The misfit toy’s power stems not from adherence of a code of conduct, but from the belief of being unworthy of love or acceptance or fated to never gain these. Restoring the misfit toy’s sense of self-worth makes them become paladins. This is pretty cool, as it includes eliminating the antipaladin’s alignment restrictions. Smite evil is replaced with grudged strike, which is executed as a swift action, designating a foe within 30 ft. Against a grudged foe, the misfit toy gets a +1 morale bonus to atk rolls and damage rolls, as well as +1 to bluff made to feint the target, Intimidate to demoralize and opposed skill checks. These bonuses can only be maintained against one opponent at a given time.. The grudged opponent provokes AoOs from the misfit toy when attempting attacks or non-harmless abilities against the misfit toy. The bonuses scale, and 7th level and every 6 thereafter net the ability to maintain an additional grudged foe at a given time. I like this one! Touch of conflict is replaced with a better-balanced touch that can freely choose physical damage type and doesn’t heal undead; it’s otherwise treated as a mind-affecting pain effect. 3rd level allows for the channeling of this touch through weapon attacks at increased daily use cost, and channel negative energy is replaced with the means to inflict pain by expending daily uses of the touch. The archetype draws spells from the spiritualist spell-list. This ties in with the amazing replacement for fiendish boon, which may be triggered as a standard action. For 1 minute per class level, spirit-bound blade’s benefits of a chosen phantom emotional focus (chosen anew when using the ability), and Emotional Conduit-like benefits are included as well. Daily uses increase by +1 every 4 levels after 5th. At 7th level, being in this state also carries a 7th level phantom’s ability, and 14th level nets DR and the option to organically change emotional focus. The capstone acts as a further delimiter – and yeah, this ability tree replaces the auras.

Editing and formatting are very good on a formal and rules-language level, with only two minor typo level hiccups that don’t influence rules-integrity. Layout adheres to the series’ two-column full-color standard, and the artwork presented is awesome. The pdf has no bookmarks, but needs none at this length.

Sasha Laranoa Harving has vastly stepped up her game over the last year or so, and this is a perfect example of this. Much like the awesome occult panoply mini contained in this bundle, the options for squishikins are well-crafted, show a keen understanding of even rare and implicit design limitations and assumptions, and are high-concept and fun. If you enjoy squishikins even in the slightest, this makes the bundle a must-own expansion, particularly since the non-evil anti-paladin archetype is frankly amazing, also eliminating the nova issue of the paladin/antipaladin with a more organic and fun engine that enhances player agenda. Touch of conflict is also admirably precise and made me smile. This is a glorious little expansion worthy of 5 stars + seal of approval! Huge kudos!

You can get these brilliant expansions here in the massive bundle!

Missed the amazing squishikin-race of playable toys/plushies/guardians? You can find them here!

Enjoying my reviews? Please consider leaving a direct donation or supporting my patreon. Every bit counts.