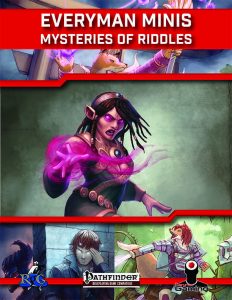 This Everyman Mini clocks in at 6 pages, 1 page front cover, 1 page editorial, 2 pages of SRD, leaving us with 2 pages of content, so let’s take a look!

On the introduction page, we find a new oracle archetype, namely the erudite seer, whose skills are restricted to Appraise, Bluff, Craft, Knowledge (all), Linguistics, Perception, Sense Motive and Spellcraft, and the archetype only gets 2 + Int skills per level. This would be super annoying, but the archetype, but both spellcastings and revelations are governed by Intelligence as key ability modifier for the archetype – and before you ask, the class remains a spontaneous caster. Really sucky: The spell save DC of the archetype is just 10 + Intelligence modifier. No, I’m not kidding you. The spell level’s out of the picture. Is that an oversight? I assume so, for the archetype does nothing else, apart from replacing 11th level’s revelation with + Intelligence modifier as an insight bonus to Will-saves. Boring, sucky, wouldn’t take it.

Now, the second page is wholly devoted to the new riddles mystery, which adds Linguistics and all Knowledge skills to the oracle’s list of class skills. The bonus spell selection is eclectic, beginning with speak with animals and see invisibility and also including ones like shout, symbol of sleep and scaling up to statue, greater spell immunity and communal mind blank. Nice spell selection. The revelations of this mystery are varied: You can get a constant feather fall via the growth of wings as a standard action that may be maintained in 1-hour increments for class level hours. Improved Grapple, Trip and Stand Still are also there for the choosing. Higher levels unlock glide and fly speed with improving maneuverability. At 10th level, this also allows you to end a charge with a grapple – and yes, pounce and the interaction with it are included. Another revelation nets Conceal Spell, with 5th level adding Stylized Spell, which may be used sans casting increase and at +1 DC.

The mystery also allows you to poach divination psychic spells or glyph-themed spells, and this interacts with another revelation: Diviner’s Insight nets you Charisma modifier + ½ oracle level clairvoyant reservoir points. These points may be used to cast divination spells known as a SP, expending points in the reservoir equal to the spell’s level. Interesting! A bonus to Sense Motive and constant nondetection, with higher level constant foil enchantment making for a nice defense. The minimum level requirement is well-chosen. Knowledge bonuses and the bard’s loremaster ability may also be found. High level oracles can get 2/day maze – with a unique caveat: A trapped creature can contemplate while trapped – emerging nets vision. Cool twist on the concept, adding a non-offensive option here. A hex-like variant of hideous laughter that is language-dependent and doesn’t render targets prone, but spans species, makes for a fun idea. Really unique: There is a revelation that lets you 3 + Charisma modifier times per day puzzle your way out of an ongoing spell effect, with higher levels eliminating some restrictions. The mechanics here are interesting and compelling.

The final revelation nets constant mind blank that may be reactivated as a swift action. The minimum age for you to qualify for each physical age category increases by a factor 10, and the aging modifiers are similarly adjusted. Particularly cool if you’re using Childhood Adventures.

Editing and formatting are very good on a rules-language level, but on a formal level, I noticed a few typos. Layout adheres to the 2-column full-color standard with the artwork-borders, and the pdf comes with a nice piece of full-color artwork. The pdf has no bookmarks, but does not need them at this length.

David N. Ross’ mystery is evocative, intriguing and mechanically interesting. The same, alas, cannot be said about the archetype included. The erudite seer is really weak and feels like an afterthought at best. That being said, this is still a nice little pdf, hence my final verdict will clock in at 4 stars.

You can get this neat mystery here on OBS.