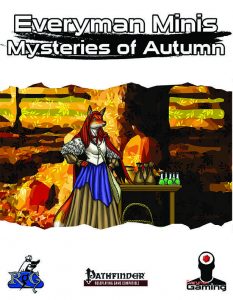 One the introductory page, we also receive a new spell, namely hibernate, which clocks in at 6th level for druid, shaman and psychic, 4th level for mesmerists. It is a magical sleep effect that causes the touched target to go into hibernation. Nice: The target may be awoken with repeated, vigorous aid another actions or by the passing of seasons.

Now, the main meat of this mini, obviously, is devoted to the new autumn mystery featured within. This mystery adds Fly, Knowledge (nature), Stealth and Survival to the list of class skills. The bonus spells granted by the mystery begin with obscuring mist and gust of wind and proceed with diminish plants, blight and call lightning storm. Interesting: The high level spells are classic negative energy-based spells, but we also get a representation of the feasts that take place in the spell selection. So yeah, these were wisely-chosen.

Now, let us take a look at the revelations, shall we? We begin with aging touch, usable 1/day, +1/day for every 5 levels. Versus objects. It is a sunder maneuver; against living targets, it deals 1 point of Strength damage per 2 class levels, 1d6 damage (untyped) per oracle level versus constructs or objects. Armor of fallen leaves may be activated as a standard action and nets you a scaling deflection bonus to AC as well as the benefits of entropic shield. The ability may be maintained for 1 hour per class level, with hours being also the increment you must spend the ability in. Fire damage caused to the armor temporarily grants the benefits of a warm fire shield starting at 7th level, and at 13th level, the miss chance granted by the entropic shield effect increases to 50%. NICE one! Autumnal repose fortifies you against exhaustion-based effects as well as poisons, curses etc- or those that bestow ability score penalties, with 7th level extending the bonus to saves to negative energy based effects and death effects and 20th level providing immunity to all of them, which may be a bit of overkill – that amounts to a second capstone worth of immunities.

Equinox lets you increase or decrease the illumination level within 30 ft. of you, for 1 minute per level, with later levels increasing the ability to modify illumination levels. Some minor complaints – since the ability can increase or decrease the illumination level, it probably should not always behave as daylight –while it properly codifies its use as a light/darkness-effect respectively, a darkness.-based daylight can be a bit weird. Also, the spell-reference here is not italicized properly, which also extends to the Hibernate revelation, which duplicates the spell of that name discussed above. The options also include the witch’s slumber hex, substituting Cha as governing attribute. There is also a scaling, low-range 1/day (more daily uses granted later) life leech that deals damage and grants temporary hit points, and which should probably be codified as negative energy damage, not as untyped. The thunder burst revelation, which causes half sonic/half bludgeoning damage and adds the deafened condition on a failed save, is nice.

Festival of the damned manifests a procession of spirits around you in a 20-foot spread, providing and interesting variant of either call spirit or haunted mist. Liked this one, even though the “scare”-reference wasn’t perfect rules-language. Still, functional and the only-at-night caveat this has is interesting. Lethargy is a bit of an odd one: As a standard action, you cause all creatures (including allies) within 30 ft. to become staggered for 1 round. Avoiding the gaze is possible and the ability can be used 3 + Cha-mod times per day. Now, I am not a fan of such lock-down abilities sans save, but its indiscriminate application is interesting. It should be noted that any option that renders immune versus the staggered condition can make this an absolutely brutal debuff, so some care may be required.

The final revelation of the mystery provides immunity to critical hits, ability damage and drain. Additionally, 1/year, you can touch a deceased creature, having it turn into a seed which will then grow if tended, sprouting into a Youth of the creature in question, otherwise acting as reincarnate. I assume that the transformation process works action-economy-wise as the spell, but clarification would have been nice, particularly since you can, as an immediate action, do that to yourself when dying. I love the visuals here.

Editing and formatting on a formal level are pretty good, and same goes for the rules-language level. There are no glaring issues here. Layout adheres to Everyman Gaming’s two-column b/w-standard for the series. The artwork is nice and the pdf has no bookmarks, but needs none at this length.

Margherita Tramontano knows what she’s doing – the mystery manages to convey the plurality of the concept of autumn in an admirable manner. While not 100% perfect, the pdf does sport some fun and unique tricks, and as such, should be considered to be a nice offering, well worth a final verdict of 4 stars.

You can get this nice mystery here on OBS!