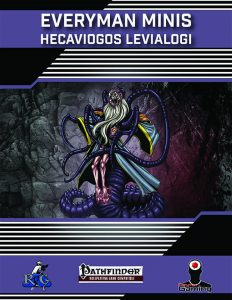 This Everyman Mini clocks in at 11 pages, 1 page front cover, 1 page editorial, 5 pages of SRD, 1 page advertisement, leaving us with3 pages of content, so let’s take a look!

So, in case you’re wondering what the levialogi (singular levialogos) are: They are a new creature subtype introduced originally in Paranormal Adventures, originally inspired in a loose manner by the Leviathans from the Supernatural TV-series. However, they are really loosely inspired by them and imho surpassed the source material in that they had a more distinct identity.

There is another aspect to them that renders them remarkable. I a game as offense-focused as PFRPG, they withstand. They endure. They don’t immediately fall apart when confronted with a properly optimized group. Levialogi are both DEADLY and incredibly resilient, making your high-level PCs actually work for once if they want to have even a remote chance of taking one of these fellows down. Add to that great fluff, and we have perhaps my favorite component of the whole Paranormal Adventures book. They are awesome and singular among monsters, in a way that very few types of subtypes are, with perhaps only kaiju and troops having this significant an impact on the base creature.

In short, they are really, really cool. This supplement adds another one to the fray, a critter to challenge even the most powerful of heroes: The hecaviogos clocks in at no less than CR 24. There is no hiding. True seeing and Perception +43. (This guy has a chance to spot the ridiculously powerful magical ethermancer-assassin I have in my game…) Among the constant tricks this fellow has, we are looking at both freedom of movement AND haste. It’s amorphous and immune against all the instant you-lose tricks and exploitable ability score drain/damage tricks. It has almost 550 Hp and invincibility 20. This value acts as BOTH DR and regeneration. Are you seeing what I mean? 😀

Okay, add 5 attacks and we also have a nice offense, but where the fellow becomes truly unique is with the mass conversion ability: The hit of a tendril can suspend aging for a year, penalize saves, cause Dex drain, modify memory, major curse…and those are the general tricks. If you own (you should!) the amazing Childhood Adventures or Microsized Adventures supplements, you’ll get two more tricks out of the fellow: For synergy with the former, we have age category manipulation, for the former, we have microsizing targets…oh, and the hecaviogos can also inflict all of that with its gaze. Did I mention the massive array of SPs? Or that, when it possesses someone, it can supersede the target’s body with its own?

The massive flavor text that further explains these horrific twisters of flesh just adds the final flourish to a pdf that oozes the level of panache I expected to find here.

Editing and formatting re top-notch, I noticed no hiccups. Layout adheres to the new two-column full-color standard of the Everyman Minis-series, and the artwork for the fellow is really cool! The pdf has no bookmarks, but needs none at this length.

Alexander Augunas had a tough job here: I usually end up as disappointed when I have expectations that are this high for a critter. Not so here. With grace and panache aplomb, the author delivers one nigh-unstoppable nightmare that can challenge the most stalwart of groups when played properly. This critter is a perfect example of what can happen when you emphasize quality over quantity, offering a level of coolness only rarely seen in creatures. This gets a final verdict of 5 stars + seal of approval, awarded without any hesitation.

You can get this amazing fellow right here! (Make those PCs work for their happy end!)

Want more of these deadly beasts, but missed Paranormal Adventures? The book is right here!

The excellent Microsized Adventures can be found here!

The similarly impressive Childhood Adventures book can be found here!