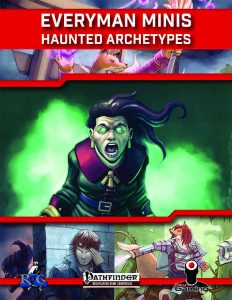 This Everyman Mini clocks in at 7 pages, 1 page front cover, 1 page editorial, 3 pages of SRD, leaving us with 2 pages of content, so let’s take a look!

Okay, first things first: This builds on the FANTASTIC, extremely flavorful Everyman Minis: Haunt Invocations-pdf. If you don’t already own it: The humble little file basically presents an engine for PCs to make DIY-haunts! Yes, it’s as cool as it sounds and oozes flavor and potential left and right!

This pdf, then, would be the expansion: on the introductory page, we get the new Enhanced apparition feat, which requires the Phantasmal Invitation feat and the summon apparition invited haunt chosen from that engine. When you summon such an apparition invited haunt, you may spend additional convocation points to call forth increasingly tougher spirits, with a complex scaling up to 17th level making sure that the spirits called actually remain relevant. Kudos!

The pdf contains two different archetypes, the first of which has one badass name: Lithographer of Disquieted Graves? Now that’s a name for a witch, archetype, right? Anyways, the archetype begins play with an oracle’s curse, haunted, to be precise, adding spells as patron spells to the familiar, and gets the ability to spontaneously cast these. The archetype can take Phantasmal Invitation and Shaping invocation instead of a hex as a bonus feat. Instead of 6th level’s hex, we get 3+ Int mod gravestriding per day – this works as a dimension door and counts as such for prerequisite purposes, though the target area must be within a recently-created haunt invocation. At 14th level, two uses may be expended to activate this ability as a swift action instead. Minor complaint: One reference to dimension door hasn’t been italicized properly.

The second archetype would have a similarly cool name: The sculptor of restless spirits is a fighter who must be evil and adds Knowledge (arcana) and Knowledge (religion) to the list of class skills. If he has ranks in either, he gets +1/2 class level to all checks involving necromancy, occult or psychic effects or undead – but for this, the archetype loses heavy armor and tower shield proficiency. Instead of bravery and 2nd level’s bonus feat, the archetype gets soul reaping. The sculptor receives a soul reservoir equal to his BAB, and the reservoir can hold up to BAB + highest physical ability score modifier points. When within 30 ft. of a creature that died no more than 1 minute ago, the sculptor may reap the soul as a full-round action to add 1 point to the reservoir. The sculptor can’t cheese this via kittens or similar harmless animals due to a HD caveat – kudos! If the creature has 2 or more HD than the sculptor, he gains 2 points instead. The sculptor may use soul reservoir points instead of stamina to power combat tricks and fighter class features, and these points may be mixed. This renders the archetype not just compatible with Pathfinder Unchained, but also the excellent Unchained Fighter released by Everyman Gaming.

Instead of armor training, advanced armor training and armor mastery, the archetype gets occult bargain at 3rd level: Phantasmal Invitation as a bonus feat, treating class levels as psychic spellcaster levels. He may choose it or feats based on it as fighter bonus feats and may spent soul reservoir points to power these haunts as though he spent half as much convocation points. Once more, points may be mixed. 7th level and every 4 levels thereafter net an additional invited haunt. Damn cool! As a capstone replacement for the final bonus feat, we get the option to rise from the grave automatically as a graveknight while the character has at least 1 soul reservoir point remaining. Upon returning as an undead thus, the character does not have the ability and instead gains the bonus feat as normal – same goes for already undead sculptors.

Editing and formatting are top-notch on a formal and rules-language level. Apart from the one cosmetic hiccup, I noticed no issues. Layout adheres to Everyman Gaming’s colorful two-column full-color standard with the artwork-borders. The pdf has no bookmarks, but needs none at this length. The artwork is nice.

Clinton Boomer is one of the authors whose prowess cannot be overstated. When he gets the balance right, he does purely amazing things, and even when he falters, he’s better than the vast majority. I have yet to read anything he penned that left me bored. He knows what he’s doing. His Haunt Invocation engine is amazing and frankly, could carry a base-class all on its own. The archetypes and feat-expansion provided here further add to an already impressive first mini, providing all killer, no filler, flavorful options that leave me with no recourse but to rate this 5 stars + seal of approval. Hauntingly captivating indeed!

You can get these cool archetypes here on OBS!

Missed the cool Haunt Invocations? You can find them here on OBS!