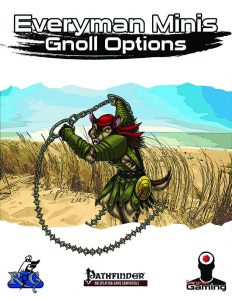 This Everyman Mini clocks in at 9 pages, 1 page front cover, 1 page editorial, 1 page advertisement, 4 pages of SRD, leaving us with 2 pages of content, so let’s take a look!

We begin this pdf with a brief introduction that also recaps the racial traits of the gnolls, before we are introduced to a total of 5 alternate racial traits. The first of these would be the feral gnoll, who gains Snapping Jaws as a bonus feats, but takes a -2 penalty to Intelligence. Feycursed gnolls replace their ability-score modifiers, instead gaining their choice of +2 to Intelligence or Charisma and -2 to Strength. They also receive Eldritch heritage with the fey bloodline as a bonus feat and ignore the Charisma prerequisites of feats that build on it. This one replaces natural armor.

Speaking of which: Instead of the natural armor bonus, gnolls may choose Slaver Magic, which nets a +1 bonus to the DC of enchantment (compulsion) spells cast and they treat their CL for such spells as one higher. Gnolls with a Charisma score of 11 or higher may also use command as a SP 1/day, with character level equal to caster level. Instead of the standard ability score modifiers, gnolls can choose to be terrifyingly ugly, gaining a +2 racial bonus to Intimidate and treat the skill as a class skill. They can also alter a creature’s attitude by 3 steps instead of 2 via Intimidate, but take a -2 penalty to Charisma. It’s a bit odd, considering that Intimidate is based on Charisma, but also makes sense. Still, this does feel a bit more wobbly. Some gnolls gain proficiency with scimitars and falchions and treat spiked chains, scorpion whips and whips as martial weapons – which makes sense. This one also replaces natural armor.

The pdf also contains 3 racial feats: Canine Gait, which is pretty amazing: It lets you sprint on all fours, with codified standing up and charge synergy that makes for an interesting choice and building block for some cool gambits. Command Obedience requires the use of Ultimate Occult and nets you all obedience spells of 6th level or lower as spells added to your list of spells at their noted telepath levels. Interesting: This does get the undercasting options right and rewards spontaneous casters. Mechanically solid, though I’m not a big fan of Ultimate Occult. Thirdly, Heckling laughter is a teamwork combat feat: As a move action, you may laugh and reduce morale bonuses gained by your foes within 30 ft., with multiple heckles stacking. Additionally, the heckling does hamper spellcasting, which is pretty damn cool – finally, the fearsome laughter of the gnolls has a proper rules-representation.

Editing and formatting are top-notch. (Ironically, with the editing credited to “@@@” being the only bad glitch I noted.) Layout adheres to Everyman gaming’s relatively printer-friendly two-column standard with a white background. The pdf sports a nice full-color artwork and the pdf has no bookmarks, but needs none at this length.

Alexander Augunas’s gnoll options are interesting, fun, and particularly the Laughter-based feat is worth the low price of admission; similarly, Canine Gait is really cool. This is not revolutionary, mind you, but it does constitute a solid, fun little racial pdf that expands the themes of gnolls in a concise, interesting manner, well worth a final verdict of 4 stars.