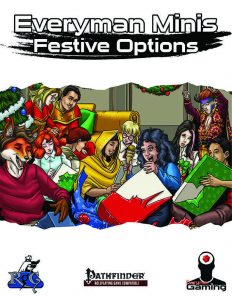 This installment of the Everyman Minis-series clocks in at 7 pages,1 page front cover, 1 page editorial, 2 pages of SRD, leaving us with 3 pages of content, so let’s take a look!

We begin with two animal companion feats: The first of these, Reindeer Flight, may only be taken by elk or reindeer with 5+ HD, granting them supernatural flight at average maneuverability and a speed of 30 ft., retaining the integrity of PFRPG’s low-level flight prohibitions.. The feat may be taken a second time for +30 ft. and an increase of maneuverability to good. The second feat is also elk/reindeer exclusive and is Reindeer Glow. This allows you to go Rudolph, emitting light as a torch. Additionally, the companion can 1/day for Con-mod rounds duplicate daylight. Cool!

The pdf proceeds to present a new Bardic masterpiece for Percussion and Singing, which requires 7 ranks in the respective Perform skill and has a cost of a feat or 3rd-level spell known. The Echoing Ostinato of Silver Bells allows for rerolls of emotion-based effect saves and allows the affected allies to regain damage to mental attributes. The masterpiece is tight, balanced for its cost and viable – like it!

Cavaliers may join the order of charity, sworn to help others. The challenge nets a scaling morale bonus to atk versus targets threatening allies and Skill-wise, Heal and Knowledge (local) are added to the class skills. Furthermore, Diplomacy can’t decrease attitude unless the check is failed in an epic manner, representing the goodwill towards these individuals. As far as order-abilities are concerned, 2nd level improves aid another, with 9th and 16th level providing the option to aid allies as a move or swift action, respectively. At 8th level, the cavalier can spend a standard action to allow an ally within 60 ft. safe passage towards a square adjacent to the cavalier, sans AoOs. This can be used 3 + Cha-mod times per day. 15th level nets the option to execute standard action strikes at +4 to atk and damage versus a foe threatened by him and the ally, prompting an AoO by the ally on a successful hit. I like this, as it promotes teamwork and more dynamic combat.

The pdf includes a total of 4 magic items, the first of which would be the bells of winter, which can 1/day, provide an uplifting buff to allies within 120 ft., as well as temporary fear immunity. The bells of this wooden baton may also be gifted to allies, transforming into low-cost items, but each such gift reduces the duration of the buff the item conveys. The cowl of guidance is cool: It generates light, but also pushes obscuring fog and similar effects away from the wearer. I liked this, though I think it should probably have a hard daily cap, considering its low price point. Rooftop threads are basically Santa-boots: +5 Acrobatics and Stealth, and by command word, up to 10 minutes a day, to be spent in 1-minute increments, the wearer may benefit from compression. The very inexpensive warmbelly tonic combines endure elements with improved passage through ice and snow.

The final section of the pdf presents two new sacred implements, the first of which would be the Cleansing Diya of the abjuration school, opposed to conjuration. This lamp, when filled with oil, cleans and mends soiled and broken objects. Interesting: Via mental focus expenditure, you can get a variant of protection from evil, regardless of alignment, with 7th level upgrading that, optionally, to 4 points for a magic circle. At 10th level, the repair option can be enhanced to duplicate make whole, also at 4 points. Cool here: The repairing options can’t be cheesed with e.g. construct PCs, since they require some time. Minor complaint: Make whole hasn’t been italicized properly. The second sacred implement would be the Menorah of Manifold Lights (Dedication), which is a candelabrum with the evocation implement school, opposed to necromancy. The menorah sheds light as a torch, and as a standard action, you can spend 1 point of mental focus to increase the radius of the light shed. While thus empowered, it also interacts with magical darkness, as though it were a light spell. You may spend more mental focus to further increase this range, and starting at 5th level, when you’ve spent at least 5 points, you duplicate daylight. I like the engine here. As another nitpick, we have another missed italicization here.

Editing and formatting, apart from the missed italicizations, are very good here. The content is presented in a clean and concise manner. Layout adheres to the 2-column b/w-standard of the series. The pdf has no bookmarks, but needs none at this length.

Luis Loza’s holiday-themed options herein are nice. While the magic items don’t reach the level of coolness of e.g. the Festive Armory file, they’re neat. I really enjoyed the respective character options, though, more than I figured I would. The masterpiece, order, animal companion feats etc. all have some nice visuals and precise executions. As such, this pdf can be considered to be a worthwhile, well-crafted offering. My final verdict will clock in at 5 stars.