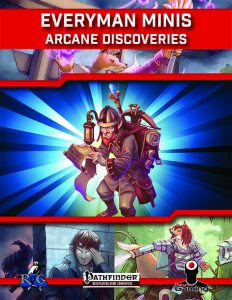 This Everyman Mini clocks in at 6 pages, 1 page front cover, 1 page editorial, 2 pages of SRD, and on the introductory page, there is the usual text and a brief recap of how arcane discoveries work. The content itself fits on one page.

The arcane discoveries included are as follows:

-Arcane Implement: Sacrifice a prepared spell as a standard action, gaining a temporary masterwork version of a simple tool, as one you could get via traveler’s any-tool. Can’t be cheesed due to being short-lived, but long-lived enough for longer tasks. Solid.

-Bottled Skill: You can spend one hour to bottle skill, of which you can only have one in effect at any given time. As you can glean, this requires Brew Potion. You choose a Knowledge skill, and the imbiber gets your ranks in the skill and treats it as a class skill for 10 minutes. If the target#s skill ranks exceed your own, the target instead gets a +5 competence bonus.

-Draconic Influence: 1/day for every 5 wizard levels beyond 10th (minimum level to take this one), you may change an evocation with an instantaneous duration and an AoE-effect into a 60-ft.-line or 30-ft.-cone.

-Familiar Messenger: Also requires 10th level. The ability nets you 3/day familiar melding and share senses. While melded with the familiar this way, you may speak through it as normal, even if it wouldn’t be able to do so. Odd: “You can cast these spell like abilities for every 5 wizard levels you possess beyond 10th.” I thought it’s a fixed 3/day? Something went wrong here. This is confusing.

-Ghostly Advisor: You get a constant unseen servant SP that is treated as an outsider with the phantom subtype. RAW, the phantom subtype does nothing but designate a creature array, but I get why it’s here. Dissipated servants reform upon preparing spells. 1/day, the presence allows you to roll twice on a Knowledge check and take the better result. This requires necromancy as chosen school and 7th level as a wizard.

-Mysterious Patron: Needs bonded object and nets you a witch patron; you can cast the patron spells via the bonded object. Needs 9th level as a wizard.

-Opening Words: Use Knowledge(arcana) instead of Disable Device due to knowing tons of opening phrases, and using it is a full-round action and may be used sans thieves’ tools. You must speak loudly. I LOVE this one!

-Subtle Illusions: Detecting auras of your illusions needs a CL-check. Does not work for invisibility et al.

-Weather Mage: Spend 1 minute to predict the weather in a 6-mile radius during the next 48 hours with perfect accuracy. I love this one. Smart players can use this very well!

Editing and formatting are very good, I noticed no serious hiccups apart from the one slightly confused bit. Layout adheres to Everyman Gaming’s two-column standard for the series, including the artwork-border. The artwork is nice. The pdf has no bookmarks, but needs none at this length.

Matt Morris provides some cool, flavorful arcane discoveries. There are a couple of discoveries here I very much enjoyed, though there also are a few that are less exciting. All in all, I consider this to be worthy of 4.5 stars, though I will round down for it, as it’s closer to good than excellence as far as I’m concerned.

You can get these discoveries here on OBS!