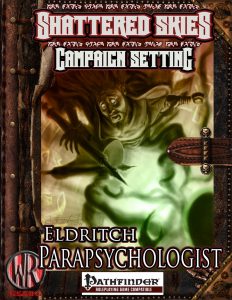 The parapyschologist class presented here receives d6 HD, proficiency with club, dagger, heavy crossbow, light crossbow, quarterstaff and no armors or shields, which hamper spellcasting. The class gets 3/4 BAB-progression, good Will-saves and his spellcasting is governed by Intelligence, but oddly is spontaneous, not prepared. The class has its very own and exceedingly detailed spell list, just fyi. They gain Eschew Materials at 1st level, though the class still sports a reference to “sorceror” in a ccp-glitch here.

Also at 1st level, the class gains the foresight ability: At first level, you may, at the start of your turn, roll a d20 and then substitute the rolled result for any d20 roll you need to make until your next turn. This can be used 3 + Int-mod times per day. Starting at 8th level, you may generate a 30-ft.-aura that either nets +2 to ability & skill checks, atk, CL-checks and saving throws for allies or inflict the same amount as a penalty. In another cut-copy-paste glitch, the ability refers to the wizard.

Parapsychology would be another interesting ability gained at first level and allows you to treat insanity: For each day spent treating the target, you roll a Diplomacy skill check versus the insanity’s DC. ON a success, the recipient of your care may reroll a Will-save. On a success, the DC of the insanity is reduced by a number of points equal to  the target’s Charisma modifier, minimum 1. If an insanity is thus reduced to DC 0, it is cured. Additionally, subjects suffering from the effects of the insanity spell (not properly italicized), they may shake off its effects as though hit by greater restoration – again, not properly italicized.

Also at first level, the class gains the ability to execute mind blasts – either healing or harming ones and once the choice is made, it cannot be reversed. This is basically a variant of channel energy, with a range of 30 ft. and a base damage/heal of 2d6, +1d6 for every level beyond 3rd. It is, however, governed by Intelligence and also may be used 3 + Int-mod times per day.

7th level nets 1/day telekinesis (again, not properly formatted) “without expending a spell slot to do so.” – which is wrong wording for SPs. 12th level increases that to 2/day and 15th level nets that AT WILL. Sure, 15th level…but still. That’s very powerful. 9th level nets 1/day Lesser Astral Projection, which is upgraded to 2/day at 14th level and at-will at 18th level. As a capstone, a parapsychologist may return to a completely new body from the dead, provided he is willing and some tiny fragment of his still remains in the mortal realms. This process generates an entirely new, young adult body – which is somewhat problematic, considering the effective immortality it provides. As another minor nitpick, the wording here refers to reincarnation, which is its own technical term in pathfinder and as such, a bit loaded. But that remains mostly cosmetic.

The pdf concludes with a recap of insanity rules as well as the 5 classics: Amnesia, Mania/Phobia, MPD (Multiple Personality Disorder), Paranoia and Psychosis. I don’t have much to complain here, apart from the formatting – spells, when referenced, as throughout the book, are not properly formatted and nor are the “headers” like “Type”, “Onset”, etc. It should be noted that these basically are only cut-copy-paste iterations of the information from the Gamemaster’s Guide.

Editing and formatting are okay on a general level; formatting on a rules-level shows that this was the freshman offering of Wayward Rogues Publishing and shows significant discrepancies from the standard. Layout adheres to a nice two-column full-color standard and the artworks provided are solid, though the interior art is stock. The pdf has no bookmarks, which constitutes a comfort detriment.

The parapsychologist is basically a blend of cleric and arcane caster; it has some healing capabilities, which is nice. It also has a lot of the issues you can observe in freshman offerings: The class, as presented, is pretty front-heavy, gaining basically all interesting abilities at 1st level. The mindblast ability fails to specify that it employs positive or negative energy, thus making interaction with critters, etc. problematic. The class is also very centered on one attribute, namely Int – everything’s governed by it, which is in contradiction to the balance of the cleric’s channel energy, which employs a different attribute. At high levels, infinite telekinesis is overkill.

And then there would be the elephant in the room: Pretty much everything the class offers is a reskin of an existing ability that makes it either work less reliably (as in the example of mindblast)…or just represents a cut-copy-paste job that wasn’t even purged of the original class it referenced: The foresight abilities, for example, are straight ccps from the wizard school of the same name. This class is a hybrid class in that it represents a Frankenstein-conglomerate of parts smashed together…and there’d be value in that, if the balancing was impeccable. Well, it’s not. Even considering the freshman offering bonus I tend to dish out, I can’t find any real value in this pdf apart from the convenience of not having to smash spell-lists together. Other than that, I don’t see any feasible reason to get this pdf, as loathe as I’m to say it. It’s not horrible…but considering the amount of cooler classes out there, my final verdict will hence clock in at 2 stars, in spite of liking the sparse fluff/theme of the class.

This class can be found here on OBS!