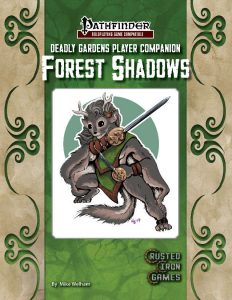 This installment of the player-centric Deadly Gardens-pdfs clocks in at 10 pages, 1 page front cover, 1/2 page SRD, leaving us with 8.5 pages of content, so let’s take a look!

So, what are forest shadows? In a nutshell, they are humanoid flying squirrels. Racial traits would be as follows: Forest shadows get +2 Dex and Cha, -2 Str, are Small fey with the gnome subtype, have a slow speed, low-light vision, +4 to Stealth in forests and +2 to Acrobatics to balance and Fly checks. Beyond that, they have antlers that grant them a primary gore attack for 1d4. They increases their miss chances due to concealment or total concealment by 5% and gain DR 5/cold iron. They also have gliding wings, making the race as a whole pretty strong, though not to the extent that the race would exceed or outshine the power of the more potent of races.

As far as alternate racial traits are concerned, the forest shadow can exchange their antlers for 20 ft. climbing speed. The miss-chance-increase can be replaced with a +2 to Handle Animals that is increased to +6 when dealing with squirrels. The DR can be replaced with electricity resistance 10. Some forest shadows can btw. be Tiny, but lose antlers and fey resistance. This can be pretty nasty with the right build, very detrimental in the hands of someone not as capable of minmaxing. Stealth bonuses for forests may be exchanged for urban areas.

Forest shadows are omnivores and tend to live in small family units and the race generally, culture-wise, should be easy to introduce to any setting. The race does btw. come with age, height and weight tables and the race features FCOs for alchemists, druids, investigators, rangers, rogues, slayers and sorceror. There are two archetypes included in the supplement, the first of these being the aerial daredevil swashbuckler, who gets a modified class skill list. The deed-list of the archetype’s modified: Swoop replaces kip up and nets a potent assault option. 7th level replaces swashbuckler’s grace with darting flight: As a swift action, the daredevil can expend 1 panache to “make a 5-foot adjustment to avoid an attack by succeeding a Fly check with a DC of 25 or the attack roll, whichever is greater.” A) “5-foot adjustment” is no rules-language. Does that count as a 5-foot step? What about AoE attacks? B) This ability does not work RAW. The action should be immediate. 11th level nets the option to use panache to help flying a vehicle instead of bleeding wounds, which is pretty situational and very late in the class progression. 15th level nets the option to take 10 for Acrobatics and Fly, take 20 for panache expenditure, replacing swashbuckler’s edge. It should be noted that the deeds are not formatted as such, which can be a bit annoying. Instead of charmed life, the 2nd level 3/day as an immediate action, they can add Cha-mod to Acrobatics and Fly, +1/day at 5th level and every 3 levels thereafter. Instead of nimble, the 3rd level yields scaling dodge bonuses and the bonus feat list is slightly modified. All in all, not impressed by this one.

The second archetype would be the unfettered sneak rogue. The archetype gets a bonus to CMD against grapples and to Escape Artist checks, replacing trapfinding. At 3rd level, they get +1 to saves versus mind-affecting effects, which increases at later levels, replacing trap/danger sense. 5th level locks the class into the Escape Artist skill unlock – not sure whether this holds true for the non-unchained rogue, though. The pdf does contain 6 different rogue talents exclusively available for the forest shadow race. Quicker crawls are nice, as are better squeezing defenses and attacks, but that one should probably reference replacing the regular squeezing rules. RAW it could be read as added penalties. Greater slippery mind, swift action Escape Artist and a CMD bonus to resist grapples + immunity versus being entangled.

The pdf does come with 3 pieces of equipment: Ailerons are basically feather-piercings that help gliding, while antler spikes add bleeding effects. Shadow pouches can conceal items, helping with Sleight of Hand. The pdf has 5 feats for the race: Between the Ribs nets +Dex mod instead of Str when doing precision damage. Situational and not too cool. Diving Attack. When using Flyby Attack, you don’t provoke AoOs from the target of the attack, provided you end the attack at least 10 ft. from the target. Duck and Roll lets you 3/day, but only once per creature, attempt a Ref-save, Acrobatics or Escape Artist check to halve damage incurred from a melee attack, with a save equal to the attack roll and crits adding +5. This has synergy with evasion. Multipoint Antlers increase antler-damage to 1d6 and 1/day allows you to break off a bit of antlers to cause bleed damage. The feat may be taken a second time for further increase of power. Sugar Rush nets the option to 1/day, within 1 hour of eating gain the benefits of haste (not properly italicized) for 3 rounds as a nonmagic effect. At the end of the rush, the forest shadow is exhausted and is treated as though he hasn’t eaten for 2 days; eating food removes these effects,. The feat may be taken additional times for additional daily uses or longer duration.

The pdf contains two magic items – dreams of the bough lets you teleport 3/day to the top of natural rocks or trees attuned to it, with a maximum height. Re-attunement is similarly simple. Feasting acorns can 3/day produce a duplicate acorn that acts as a full meal. Breaking the item is also possible, duplicating the effects of hero’s feast for up to 11 beings. 3 new spells are included: Sweeten can make food more palpable and is particularly nice for forest shadows with Sugar Rush. Swirl of Leaves generates an obscuring cyclone you may move around. Updraft is pretty self-explanatory. The pdf concludes with a sample forest shadow hunter and his dire weasel companion.

Editing and formatting are very good on a formal level, but only good on a rules-language level: As a whole, the bonus-types etc. are nice, but rules-language isn’t always perfect. Layout adheres to a 2-column full-color standard. The artworks are originals and in full-color -and really nice, perhaps my favorite aspect of the pdf – kudos to Liz Courts and Jacob Blackmon. The pdf comes fully bookmarked for your convenience.

Mike Welham’s forest shadows are a very cool race, concept-wise – come on, antlered flying squirrels? Basically a cool wolpertinger-race? Damn cool! Unfortunately, the supplemental material provided for the race isn’t as unique as the concept of the race. The archetypes left me less than impressed, with the swashbuckler being unfocused and the rogue’s non-unchained sections feeling like an afterthought. The other supplemental material similarly did not blow me away either. Don’t get me wrong – this is not bad, but neither will it redefine races or utterly blow you away. In the end, this is a solid mixed bag, slightly on the positive side, but not to the extent that I’d feel I could round up from my final verdict of 3.5 stars.

You can get this cute race here on OBS!