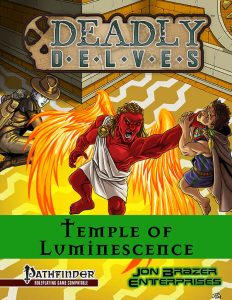 This installment of the Deadly Delves series of modules clocks in at 41 pages, 1 page front cover, 1 page editorial, 2 pages of advertisement, 2 pages of SRD, leaving us with 35 pages of content, so let’s take a look!

This review was moved up in my reviewing queue due to being prioritized by my patreons.

Now, first things first – this is a high-level adventure intended for level 15 PCs, and as such, is bound to be challenging. A well-rounded group is very much recommended. The adventure, theme-wise, centers around a sun deity and a grand malfeasance befalling her most sacred of temples, and as such, the stats for the deity are provided in an appendix. Domains, subdomains, inquisitions and mysteries are noted, as is an occult ritual unique to this belief. Big plus here: The deity is easy to replace with Saranrae and similar sun goddesses and gods – the module does not require in-depth understanding of doctrine or the like to work, making adapting it simple. A CR 18 high-level monster is also introduced and doubles as the BBEG of this adventure – and yes, the demon is actually VERY destructive. This adversary is not the only fully statted high-level being herein, mind you.

As far as cartography is concerned, this module gets two thumbs up: The adventure comes with a second pdf that provides the map in a version with all keys and features, one sans keyed numbers and all features, and one sans features or keyed numbers, providing all the tools we expect regarding the respective cartography demands of the modern player. The maps are in full-color and neat. Big kudos for including full and proper map support here.

A big plus here would btw. be the terrain use of the module: With complicating terrain hazards and a global effect that makes the fire theme work in properly codified rules, the adventure makes clever use of obstacles, traps, curses, etc. – this is a big plus and a component that keeps the battles dynamic.

A big issue that many a GM faces regarding high-level dungeon exploration, is that most modules do not take player and PC-capabilities into full account. This module has a distinct and clever way to make the PCs explore the dungeon properly without handholding.

But in order to talk about how this works, I need to go into SPOILERS. Potential players should jump ahead to the conclusion.

All right, only GMs around? Great! So, bad things have been happening, and the PCs are asked to investigate the Temple of Luminescence, which is on lockdown. Bluffing or fighting their way past the guards, the PCs will soon realize the reason for the seismic activities haunting the area – it seem like the faithful have taken to a rather…well, let’s say, “radical” interpretation of their deity’s creed. The High priest plans to draw the sun closer to the planet, to bask all sinners and folks in the glory of a scorching sun. So yeah, the stakes are high – we’re talking about a global apocalypse here!

I did mention global effects for the dungeon before: Flame damage inflicted within stems half from divine energy, bypassing resistances etc., while maintaining the elemental theme. Furthermore, the seismic activities add further complications while exploring the already challenging temple. The clever idea I mentioned before, the one that makes the PCs explore the whole temple, ties btw. in with the ritual: The sanctum sanctorum can only be breached by defeating the Morning Priest and the Noontime Priest. In an interesting twist, this often puts the PCs in conflict with creatures only seldom faced in combat by PCs, for example devas and similar angels.

The traps, just fyi, are suitable for PCs of these lofty levels as well, and better yet, smart players may actually never get to see a few of them, as there is a sensible reason and means to bypass them – kudos for not sacrificing in-game plausibility for design here. That is not to say that they’re simple, mind you: One combo of a trap and a particularly nasty haunt (whose existence makes sense!) can be stated as something rather brutal, and delightfully so. The haunt is btw. fast, so yeah – this is a module that demands respect, even from high-level PCs – it’s not pleasant being blasted to dust by a photonic cannon or being crushed by a gravitic corridor, after all… That is a good thing. Not convinced yet? Well, one of the bosses that the PCs will need to best to get to the High Priest? Very old solar dragon. Did I mention the encapsulated singularity or the searing pulses of light? Light can be a cruel mistress indeed, and guess what? The High Priest is not the final boss! That CR 18 critter I mentioned? That would be a really nasty new form of demon, the sun demon. And no, he’s not so stupid as to fight those interlopers alone… So yeah, bring industrial quantities of magical sunscreen, you’ll definitely need them…

Editing and formatting are very good on both a formal and rules-language level. I noticed no serious glitches. Layout adheres to the nice 2-column full-color standard of the series, and the pdf comes fully bookmarked with nested bookmarks – these are organized in a smart way, btw., featuring nested entries for specific sub-routes the PCs have to take. That’s going one step beyond and deserves applause. Interior artwork is consistent and mostly of the same style and quality as the cover. The cartography, as noted, is nice and full-color, and the player-friendly map support is a big plus for guys like yours truly that suck at drawing, or for those that play online.

An elemental dungeon at high levels? In the hands of a lesser author, this could have easily been a trainwreck. However, Mike Welham is a veteran, and his reputation is well-deserved: The Temple of Luminescence is an actually well-done, cataclysmic and dynamic dungeon. The clever use of traps, monsters and modular and local terrain hazards and effects can constantly maintain the gravitas of the situation at hand. It’s very hard to forget what’s at stake here, and the plot of the adventure, as well as the clever way to make the PCs actually explore the dungeon, is really cool. The adventure, in spite of being a rather technical dungeon crawl, never loses its unique and sensible atmosphere, never feels like “just another” dungeon. The clever adversary choices and diverse challenges render this an excellent example for rewarding high-level dungeon design that also has a BBEG who is surprisingly smart in how the last stand is set up – but you can see that for yourself.

In short: The “Temple of Luminescence” continues the streak of excellent adventures that have lately come out of the Deadly Delves series – this is a great adventure, worthy of 5 stars + seal of approval.

You can get this impressive high-level module here on OBS!