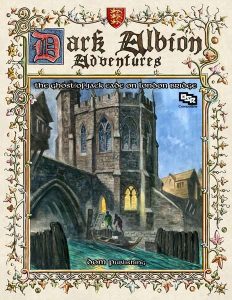 This module clocks in at 26 pages, 1 page front cover, 1 page hyperlinked ToC (only in the pdf), 1 page editorial, ½ a page ToC, 1 page SRD; the print-version, obviously, does have a back cover as well. We have 21.5 pages of content, so let’s take a look!

This review was requested by one of my patreon supporters, who sent me the Dark Albion books, to be reviewed at my convenience.

Okay, so this is an introductory adventure/setting book, and it is billed as a dual-format book for both Fantastic Heroes & Witchery (one of the most underappreciated games ever), and generic OSR. A few notes here: I usually consider dual format books bad deals for the customer, because you invariably end up with content that you didn’t want or planned on using. For games with complex rules, this also usually results in issues with the logic, power-levels, etc. The Dark Albion books did not fall prey to this, both due to the systems in question being pretty compact in their demands regarding real estate, and due to a pretty meticulous approach to rules. This adventure is no different in that regard, so kudos there.

Which brings me to another aspect: I vastly prefer OSR books to actually subscribe to a specific rules-set. Why? Because playing in Labyrinth Lord or For Gold & Glory, or LotFP for that matter, are very different experiences, and power-levels. While many referees have a relatively easy time adjusting components on the fly, this book goes a step further and genuinely walks you through the rules that are employed: We get BOTH ascending attack bonuses AND THAC0s (called TaAC0 here); one save is presented, with notes for 5-save systems provided, and even a default DC noted. Skills can be resolved via d6, via d%-checks, or with d20 vs. DC, accounting for both 5-type style saves and those based on ability scores. Interestingly enough, this does a better job with these guidelines to allow the book to be used with e.g. 5e than many of the bad conversions to 5e I’ve read. In short, this is one of the VERY FEW books I’d consider to be truly successful at being a universally applicable OSR-module without losing details or bad hiccups.

The module is intended for 1st to 2nd level characters, though personally, I’d suggest using this as a first level adventure. In case you were wondering, btw.: The rebellion of the eponymous Jack Cade was a very real thing. Cade’s rebels were beaten on London bridge due to his men starting to loot, earning the ire of the populace, so there is a historical background here – when the module starts, the rebellion is obviously already over. Nice, btw.: The book does come with a pretty significant epilogue and suggestion for further adventures, with hooks often based on actions the PCs may have taken. The module has no read-aloud text, just fyi.

In order to talk about more this module, I’ll need to go into SPOILERS. Potential players should jump ahead to the conclusion.

The module’s rules deserve further applause: One of the few magic items (this is Dark Albion at its best), is a spellbook that contains a variety of different spells that don’t properly work – like a charm person accompanied by insane jealousy. I liked these. In fact, I’d have loved to see a similar treatment for all spells in a rulebook, as these can be easily used as a kind of spell mishap.

Anyhow, what you should know, is that London Bridge as depicted herein, is not only fully mapped (including sideviews) and illustrated (some gorgeous b/w-pieces), it also pretty much is an excellent generator: The pdf sports a generator that lets you determine the number of levels of a building, the number of shops, the type of sold goods, the number of rooms per level, room contents, room occupants and attic content and current occupants. The maps provided help render this place alive, and better yet, the book comes with 20 VERY DETAILED NPC/sample occupants-angles to further make the bridge come alive.

The bridge is more than dressing, though. Indeed, the module provides rules for navigating the constant throng of people on London Bridge, including chases and vanishing in the crowd, as well as chases by row boat. Concise rules for falling into the Thames are provided as well. In a way, it may even be more salient to think about this supplement as a local environment sourcebook with a detailed adventure hook.

You see, structurally, this is aimed at the experienced GM: It presents an environment and a problem, all associated rules you’d require, and then throws in the PCs – in a way, this is as wide-open a sandbox in this context that it can be.

Now, plot-wise, I love that this module subverts superstition – you see, Jack Cade’s ghost has been seen on London Bridge (his decaying head on a pike being one of the b/w-artworks), and people are spooked. Well, if you’re gathering your trusty Undead-EX-gear right now, you’ll be surprised to hear that it’s no ghost plaguing the bridge, but rather an enterprising criminal who happened upon a  mage suffering from a botched spell; he quickly absconded, and, being illiterate (nice catch!) starting fumbling about with a crystal, a rather malfunctioning magic item. This item lets you use a ghostly project image – and the criminal has been using the item rather well in his scam! If people are running from ghosts, they’re less likely to notice missing valuables, right? This is a genuinely cool angle I enjoyed, and if you execute it properly, can provide more than one day worth of gaming. You can run this is a quick manner, in a slow one, and anything in-between – but however you run it, make sure you have a very detailed knowledge of the content herein. The sandboxy nature and open structure, coupled with the locale and density of content do mean that you should properly prepare this module. If you do, you can use all those sample PCs and mapped locales to evoke a genuinely plausible vision of London Bridge.

Conclusion:
Editing and formatting are very good on a formal and rules-language level. Layout adheres to Dark Albion’s nice two-column b/w-standard, with a surprising amount of neat b/w-artworks and an impressive amount of cartography. I wished the maps had been collected in the back as well, for printing them out, though. Similarly, the lack of player-friendly maps is a downside for the module – more so for this than for many others. Why? If this had player-friendly maps, it’d allow the GM to just hand out house-map after house-map as the PCs explore, making the bridge “grow” on the table! This is still possible, but requires some obvious work. I do suggest you do that, though – it’s totally worth it!

Dominique Crouzet’s first (and much to my chagrin, so far only) Dark Albion adventure is a successful venture; while I’d argue that this is closer to a regional sourcebook than an adventure in the traditional sense, its adventure components can be executed with rather impressive results in the open, exceedingly-detailed sandbox provided here. I consider this module to be very much worth getting, and a great way to get into Dark Albion. Now, beyond Dark Albion, this would require some serious reskinning, obviously, so do bear that in mind.

While the map-shortcomings did irk me, there is one more aspect to consider: The pdf clocks in at a grand total of 2 bucks, with the print version (saddle-stitched softcover) clocking in at what looks like at-cost at just $6.99, the price you pay for many pdfs. Considering the great bang-for-buck-ratio, I’ll round up from my final verdict of 4.5 stars.

You can get this inexpensive adventure/London Bridge-sourcebook here on OBS!