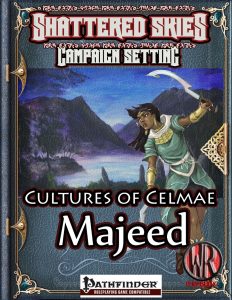 This installment of the Cultures of Celmae-series clocks in at 9 pages, 1 page front cover, 1 page editorial, 2 pages of SRD, 1 page back cover, leaving us with 3 pages of content, so let’s take a look!

Now, one of the aspects in my home-game that came from my deep love for the Sword & Sorcery-genre, it would be unique ability-score arrays and racial traits for different ethnicities – thus, I am pretty happy to see this pdf add mechanical relevance to a culture. The culture depicted herein would be the Majeed, who are humans that receive a +1 bonus to Will-saves. Now there is more to a culture, obviously – the Majeed, dusky-skinned, are the dominant seafaring nation of the world of Celmae and in an interesting twist, their social structure is actually fiercely matriarchal, flipping the despicable sexism to which women were subjected to in earlier ages on the head: Men are considered to be little more than breeding stock and fodder for the army, potentially also due to the emphasis of the worship of the sea goddess Amaura.

The culture of these beings, inextricably linked to the waves and water, in public baths and a fantastic iteration of the fables colossus of Rhodes generate a nice mythical resonance – even though the colossus’ destructive ray could have warranted mechanical representation. The ongoing war with sahuagin and the hunters set to assault them further adds a nice tidbit of the local culture for these guys.

The pdf also sports 8 race traits for the Majeed, though none of them have been properly subtyped. It should also be noted that the bonus type array for the traits is inconsistent – there are some traits that properly use the trait bonus, while others remain untyped. Minor thing, sure, but an avoidable flaw. The traits generally are nice and include 1/day immediate action debuffs to accompany spellcasting, skill bonuses, and the like. Unfortunately-named: Sea Legs. there is already a feat with that name and the trait nets you not one, but two skills as class skills, which may be a bit much – the usual formula is a minor bonus and one class skill. As a whole, though, this section is pretty solid.

From the culture of the Majeed, we dive into the kingdom of Majera and receive a nice, quick summary of the history of the place – interesting btw. – the wealth of the empire has made being poor basically an affront to Amaura – which has its own massive array of potentially intriguing angles. The capital city of Harodai receives its own settlement statblock and we close with a deity write-up of Amaura – a generally nice write-up, though two favored weapons and 7 domains both exceed the standards established for deities, with the dual favored weapon opening up some issues regarding favored weapon proficiencies: Do worshipers get one? Both? The engine assumes one and this can put a bit of sand in the gears. These are ultimately minor hiccups, but they do drag this a bit down.

Editing and formatting are not yet good, but better than in older books by Wayward Rogues Publishing – there are a couple of rules-language and formal hiccups here. Layout adheres to a nice 2-column full-color standard and the pdf sports nice, original full-color artwork. The pdf has no bookmarks, but they aren’t necessarily required at this length.

Robert Gresham and Cody Martin provide a glimpse at the Majeed that constitutes a solid first look at a culture. It is very basic and there’s not that much meat herein. The prose is solid for the most part, but the general flow of the text could be slightly smoother. The pdf is, if you’re looking for such a mostly fluffy offering, worth a look, but falls slightly short of the potential the Majeed have – there could be slightly more information on colossus, on the customs, nomenclature, etc. – we only get a glimpse. The pdf has potential and offers a glimpse, but only a glimpse.

I certainly hope to learn more about this culture in the future, for the big bane of this pdf is that it simply has even less meat than the already minimal content featured in the Brynnyn-installment. What’s here is per se solid, if not particularly grand prose…but at this length and with mostly fluff, it is the prose that needed to excel – and it’s solid, sure…but not to the point where I’d consider this to be mega-compelling. However, at the same time, this is Pay What you Want as per the writing of this review and thus, allows you to determine yourself whether you consider this worthwhile or not. My final verdict will clock in at 2.5 stars, rounded up to 3 due to this being PWYW.

You can get this brief pdf here on OBS!