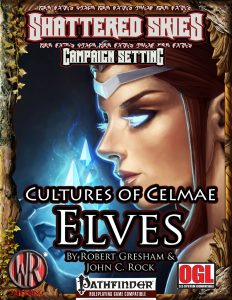 This installment of the Cultures of Celmae-series clocks in at 26 pages, 1 page front cover, 1 page editorial, 2 pages of SRD, 1 page of advertisement, 1 page back cover, leaving us with 20 pages of content, quite a lot for the low price-point, so let’s take a look!

The elves, in an interesting twist of the traditional myth, are not the oldest humanoid race of Celmae: Instead, the mysterious beings have suddenly appeared on the world as the Shattering was unleashed…alongside many a significantly less benevolent entity. As such, the arrival and war-effort of the elves against the creatures unleashed was met with a mixed response, with treaties confining them to their chosen forest homes for the most part…though a dwarven prophecy of global annihilation at the elven hands still floats like a portent of ill omen over the race’s dealings with the stout folk. Considering that Delwynndynn Morningstar, greatest hero of the elven race, succumbed to ghoul fever and turned into a horrible mockery of his erstwhile noble nature (think Athas of Warcraft-fame, in elven), that prophecy may yet come true. And yes, this legend is indeed represented herein as a badass CR 19 dread ghast magus/slayer. Oh, and guess what? You won’t believe that: His stats, while not perfect, italicize the spells! Okay, the magic items are not italicized properly and there are some formal hiccups here…but it’s a start! On a plus-side, his artwork is phenomenal and cool.

But I digress: Things turned more confusing for outsiders with the arrival of the Dray-kel’aravaas, a completely different type of elf who promptly won an internal war against the other elves, one that also meant an end to the previously-enforced exile and confinement of the elven people. This reorganization also meant the splitting of the elven people according to the lines of different houses, with the original elves being further known as members of the house of the lost. The scholar Brezzleman has an interesting and somewhat controversial report that tries to explain the elven mystery: He claims that the Dray-kel’aravaas are aliens, who have been sent by their Mi-Go-masters to find the fugitive original elves, who were led away by a mythological figure. The Dray-kel’aravaas were then abandoned by their fungal overlords…and it is hinted that elf-like behaving orcs may be tied to the Dray-kel’aravaas as well, allowing for a Middle-Earth-y overlap, should you choose that aspect to be true. So yeah, much like Golarion’s elves, these guys are aliens, though the focus is admittedly different.

Racial trait-wise, the elven people herein are modified from the default: Their weapon familiarity is changed to hand crossbow, lightning rod, rapier and short sword and instead of elven magic, they can cast dancing lights, darkness and faerie fire 1/day as a SP – oddly without requiring the standard minimum of 11 in a pertinent ability score. They also get +1 to atk versus dwarves (not as a racial bonus) and SR 6 + their class levels. This, as a whole, constitutes a significant upgrade of the power of the race. The Houses represent different alternate racial trait packages that alos modify the weapon familiarity: The House of the Sun gains +2 Str and Cha, -2 Con and applies the grudge bonus to orcs instead of dwarves and loses darkness. The house of the moon gets +2 Dex and Wis, -2 Con, +2 to Sense Motive (erroneously called “Keen Senses”) and changes the SPs to detect magic, enhanced diplomacy, guidance. The House of Stars gets +2 Int and Cha, -2 Con (making them lopsided caster-focused), +2 to all Knowledge Checks, daze, charm animal and charm person as SPs, making them imho stronger than other houses. There is one background trait included (erroneously referred to in the plural) that nets +2 to intimidate versus non-elves, -2 to Diplomacy versus non-elves. The trait is not properly formatted and does not feature the proper nomenclature and verbiage regarding bonus type etc.

The pdf mentions elven short- and longblade as alternate origins of katana and wakizashi, though the latter is not spelled out and must be deduced from context. The pdf also introduces us to two elven nations: the island-nation of Aravaasa (including the settlement stats of the city Moonmeadow), as well as the forsaken forest of Endiel, which is now haunted by Delwyndynn Morningstar and his ghoulish legions. The description of this region and its horrid transformation represents one of the highlights of this pdf, so kudos there – though if you expect to see the level of detail allotted to the Briranor’s realm, you won’t find that here.

Marsila Moonbow, patron deity of elves, is depicted herein as well, with 4 domains and subdomains assigned to her and both elven long- and shortblade as favored weapons. As always, this can result in some favored weapon interaction chaos, but considering the thematic unity and rules-precedence that treat a daisho as one entity (like Oriental Adventures, back in 3.X), I can kind of, sort of, see it. Kind of.

Next up is a new class, the forest warden, who receives d6 HD, 4 + Int-skills per level, proficiency with simple and martial weapons and light as well as medium armor and shields, excluding tower shields. The class receives 3/4 BAB-progression and a completely weird save progression that begins with good Fort- and Ref-save progression and then switches it up to make Will the best save, culminating with +9 Fort and Ref, +13 Will at 20th level. I am not a big fan of this decision.

Oh, and the class receives Wisdom-based spellcasting that is spontaneous (uncommon, but I don’t mind that attribute-choice) drawn from both ranger and druid-list, using the lowest spell level if it shows up on multiple spell-lists. That in itself would already be pretty strong, but starting at 5th level, the class can also select spells from the sorc/wiz-list, the most powerful list in the frickin’ game. So, spellcasting alone…makes this class overpowered as F***: We combine two of the most powerful spell-lists in the game, cherry-pick the lowest level AND add a spell-list (ranger), whose 1st level exclusives are balanced for 4th level access. Oh, and guess what: They’re divine spells! You can cast in armor! F*** ME. If that sounds horrible, wait for this gem: “A forest warden cannot use spell completion or spell trigger magic items (without making a successful Use Magic Device check) of sorceror/wizard spells of 7th level.” You can read that in the spell-section. So, what about 8th level and 9th level? No idea. Oh, and 8th level nets you the option to ignore arcane spell failure in nonmetallic light or medium armor…which does not apply in the first place, since the class casts divine spells. This class is a mess. So base spellcasting is jumbled wreck and even with that unlock, even if I’d assume the base spellcasting had the proper wording to prevent that…this ability would provide full armored sorc/wiz-casting in addition to all the druid/ranger/hunter-tricks.

And yes, this being a hybrid of hunter and sorc, we further add animal companion and focus, bloodline (at 5th level), trackless step, woodland stride, etc. And no, I’m not going to dignify this abomination of a class with a detailed breakdown. Whoever wrote this chucked out any notion of balance out with the bathwater. This is better than both druid and sorc. That says everything. Unless you go for insanely powerful gaming, this class is broken – and when you do, you’ll have issues with rules-precision, something VERY important in high-powered games. I usually try to find something positive to say about every class. I tried really hard. I can’t.

*takes a deep breath* We close this pdf with two pages of elaboration on the various houses of the elves, which here make up the seelie court…which can provide a fluff-disjoint if you sue that nomenclature for fey, but that at least remains a nitpick that you can ignore.

Editing and formatting are not good: There are several obvious formatting issues in the rules-language and the hybrid class is confused and not balanced in any way, shape or form. Layout adheres to an aesthetically-pleasing two-column full-color standard and the pdf sports a blend of amazing new artworks and older pieces. The pdf has no bookmarks, which constitutes a comfort-detriment.

Robert Gresham, John C. Rock and Michael Whitney provide a pdf on elves here that sports some nice fluff. The power-upgrade for the elven race(s) herein puts them on one level with the more powerful races, meaning that they eclipse regular gnomes, dwarves and humans of Celmae in direct comparison. The prose is generally nice, though a couple of hiccups do exist on a formal level. The hybrid class should have crashed and burned alongside the elven starship and seriously needs to go back to the drawing board as one horribly overpowered mess.

…this leaves me with not much to recommend. The prose is nice. The background flavor has some pretty nice bits and the inclusion of high-CR villain stats are nice…but the statblock sports several formatting glitches and errors as well. I like much herein, but if crunch is involved in any given section, you’ll find an error here….and prose can only do so much to salvage a pdf, even one that is relatively inexpensive for the page-count. My final verdict will clock in at 2.5 stars, rounded down. If you’re not in it for the fluff, steer clear of this one.

You can get this pdf for 2 bucks here on OBS.