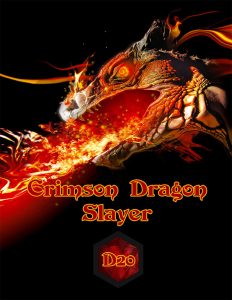 So, the latest iteration of Crimson Dragon Slayer clocks in at 7 pages – 1 page front cover, 1 page editorial/advertisement, leaving us with 5 pages of content, so let’s take a look!

I’ve been asked to cover this pdf on behalf of my patreon supporters, and since it’s part of the massive Cha’alt book anyways, was moved further up in my queue.

After a one-page introduction, we get the basic rules of this game, but before we dive in: This is kinda billed as an OSR-hack of 5e, and that is correct; however, it should be noted that this has almost nothing to do with 5e per se, and it’s better to consider this to be a rules-lite, minimalist take on RPGs, though one that is relatively open to scavenge material from d20-based games from. To a degree.

Most obvious 5e-concept: When circumstances are favorable, you roll Advantage, when they are unfavorable, you roll disadvantage – i.e. you roll 2d20 and use the higher or lower value, respectively. Combat is abstract, and assumes a round to be the equivalent of 1 minute. Assisting a fellow PC nets advantage on the check

Initiative is based on GM fiat and logic – if it makes sense for the PCs to go first, they do. Ties go to the PCs.

At the start of every session, each PC gets an inspiration, i.e. a reroll of a d20. Levels cap at 10, and there are no XP – levels are gained every other session. At 5th and 10th level, the players get to pick a feature, special ability or feat pertaining to their class – these may be from some book, adapted, or made up.

Character creation works as follows: You choose a race – human, elf, halfling, gnome, dwarf, half-orc. You get a racial ability you can use once per session. These are not provided, and as such, subject to the group’s whims. Then, you choose a class: Fighters get 10 HP per level, and add level to to-hit rolls and damage. Wizards have 4 HP/level, and can cast EVERY spell in the PHB that has a spell level below their class level. HOWEVER, doing so hurts the wizard for HP equal to the spell’s level. This is e.g. an instance, where using this is a 5e hack stops working, considering how Concentration operates in that game. Clerics get 8 HP/level, and a single invocation that can be used at touch without penalty. At 1st level, they can use this to heal 1d6 HP at touch, or damage demons, undead, etc. – no save. 3rd level and every odd level increase that by +1d6.  Clerics are broken and wreck the deadly theme that Venger’s books usually go for. Without a limit to how often they can cure, they can generate infinite healing. Which sucks and takes all the danger, save insta-death etc., out of adventuring. This needs to have some sort of limit.

At 0 HP, you become unconscious; if your negative HP exceed your character level (say -7 HP for a 6th level character), you die. PCs get one short rest (45-60 min) per day, which replenishes the character’s level times 1d6 HP. A long rest of 8 hours fully replenishes HP.

To attack, you roll a d20, and if you hit the opponent’s AC or above, you hit. On a crit, you deal double maximum damage, with additional bonuses due to magic etc. not doubled. On a natural 1, you fumble, end up prone, disarmed, etc. and have disadvantage on the next attack.

AC starts at 10, is ascending, and thieves get their level to AC if not wearing any; leather grants +2, chain mail +4, etc., with helms netting +1 and shields +2. Without magical aid, AC caps at 20. Damage inflicted with weapons is contingent on class – fighters deal d10, clerics  d8, thieves d6, and wizards d4. This is a bit weird at first, since the critical hit rules reference weapon damage, which does not exist in the game.

After this, you choose your alignment from Law, Chaos, Neutral and Unaligned. You then determine something noteworthy about the character – an ability, an item, etc. – if you go overboard, the GM gets to impose a flaw to bring the chosen ability in line. There are no skill checks for mundane tasks, and Perception etc. is roleplayed (GOOD CALL!); when you do roll a check, you have a flat DC of 15, and you get your class level to the roll if the roll pertains to the tasks of the class.

Magic items require 15 minutes of attunement to know what they do (otherwise, you can experiment), and certain items, such as staves or rods may only be attuned by wizards. There seems to be no cap on the number of magic items you can have attuned at a given time.

Editing and formatting are very good on a formal level, good on a rules-language level. Layout adheres to a nice full-color one-column standard, with blood splotches as visual elements. The pdf has no bookmarks, but seriously doesn’t need them at this length.

Whether or not this is for you depends on a few factors: Looking for a stripped-down, fast-play RPG that leaves all the options to become granular in details wide open? Then this delivers, big time. It does require that you balance spells and the like yourself, but as a hack, it is imho vastly superior to Venger’s previous dice-pool-based iteration of Crimson Dragon Slayer. Not just regarding the depth that it allows you to add, if desired, but because it represents the author’s iconoclastic perspective and writing style much better. This, in short, is a great step forward. It’s also an easy and (mostly) consistent way to teach newbies very quickly and without much hubbub about old-school roleplaying.

Does it allow you to engage in grand feats of tactics, does it have the same granular options as big OSR-systems? No, but that is pretty much the intent of the book. In many ways, it is an ultra-boiled down distillation of a few select 5e-concepts, which have then be applied to a super rules-lite OSR game. If that’s what you’re looking for, perfect – It works. Granted, it doesn’t have much to do with most d20-based, complex games, but it succeeds in what it tries to do. That being said, the pdf never says anything about movement standards, clerics are broken as written, and backstab needs some information. All of these are pretty crucial flaws, even if you go rules-lite. They are all easy to fix, which I certainly hope will happen, for without them, this is easily the best CDS so far. Considering that this is a FREE offering, my final verdict will be 4 stars.

You can get this rules-lite D&D hack here on OBS for FREE.