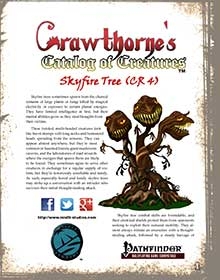 The skyfire tree spawns spontaneous from plants destroyed by lightning, resembling trunks, from which 3 toothy, quasi-humanoid heads grow. What could be nightmare fuel is a bit sabotaged by the artwork employed here. These things can launch 4d6 electrical bolts as a 60 ft. touch attack via a standard action and generate an electrical field that provides +4 to AC versus ranged attacks and guards versus magic missiles. Here’s the thing, though: 1/day, their electrical arcs can also inflict +1d4 Intelligence damage (slightly non-standard wording: “sixty” instead of 60, but that’s cosmetic). A skyfire tree may only affect a target once with this and gains from here on out +3 Sense motive versus the foe. Every 10th time, the tree manages this attack, it may attempt an Intelligence check to increase its Intelligence score. Upon reaching Intelligence 10, it loses the Int-damage thought-stealing ability, but increases its speed from the 5 ft.-default to 30 ft.

Conclusion:
Editing and formatting are good on both a formal and rules-language level – though the flavor text has a typo, confusing “green” with “greed” and e.g. a plural glitch or two. Layout adheres to the 2-column full-color standard of the series and while I’m not big on the social icons and dispersal of non-gaming parts through the pdf, from an aesthetic point of view, there is not much to complain about. The pdf comes with the classic Crawthorne-artwork as well as the skyfire tree artwork…which looks just derpy and goofy. The pdf comes with a second, more printer-friendly iteration, which is nice to see. The book has no bookmarks, but needs none at this length.

The skyfire tree crafted by Emily Brumfield is interesting – but its CR 4 feels a bit…weird? It has these 3 pseudo-heads…so why can’t it acts with all of them? Elder metamorphosis is also something I’m not sure that makes sense for the critter, as it takes their one unique ability…kinda away. Its low Dex score and reliance on the electrical bolts to hit also means that it is a pretty weak, if resilient CR 4 critter. More of a nuisance/artillery type of adversary, but yeah. All in all, one does not necessarily require this guy, but it’s a decent enough plant. My final verdict will hence clock in at 3.5 stars…but I can’t really bring myself to round up on this one.

You can get this critter here on OBS!
Endzeitgeist out.