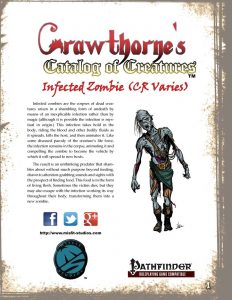 This installment of the Crawthorne’s Catalog of Creatures series clocks in at 6 pages – the front cover containing the header, creature artwork and the social media icons/homepage of misfit studios. The SRD takes up 1 page and the editorial is in a sidebar – to get all the material you thus have to print out the cover with the icons as well.

The infectious zombie is a pretty popular trope and this pdf reimagines them as a template – as presented, the template renders a creature that has acquired it a neutral undead (interesting choice!) – HD gained from class levels or racial HD are dropped and replaced with d8s, with sizes of the infected critter further increasing the HD of the afflicted: Small or Medium creatures receive +1 HD, Colossal ones +10 HD, with sizes in between clocking in at +2, +4 and +6 HD, respectively. Infected zombies gain darkvision 60 ft. Fort-saves are set at +1/3 HD, Ref at +1/3 HD and Will at +1/2 HD +2. Infected zombies gain channel resistance +2 and is not destroyed at 0 HP, instead continuing to function until they have been reduced to negative Charisma score hit points by anything but fire, acid or electricity. They are only destroyed by either reducing them to twice Charisma score in negative HP or a coup de grace. Below 0 HP, they are helpless, though they may still make attacks as a standard action versus creatures in their square. The template includes rules for called shots versus their brains, just fyi.

Winged infected zombies retain flight capabilities, but reduce maneuverability to clumsy and all other movement types are reduced to 2/3 of their former value- They gain slam attacks, the usual undead BAB and -2 Dex and lose all feats and don’t gain any by HD…but they do gain Toughness. They are staggered and also lose any special qualities but extraordinary qualities that improve melee or ranged attacks. Oh, and obviously, they infect folks:

The pdf contains the walking death disease, which takes multiple exposures into account (nice!) – the more often you’re exposed, the worse the DC gets. And zombie HD also influences the DC. The disease targets COn and may cause drain and is pretty virulent…so yeah, neat. The 3 adventure hooks provided are nice and the pdf does talk about the differences in comparison to plague zombies. Before you’re asking – this template’s respective CR is determined by the HD-value of the infected zombie, though the pdf could be a bit clearer in that regard. As written, it is not entirely clear whether you should look at the previous HD or the one after zombification to determine CR and XP. It’s obviously the latter, but yeah. The pdf does feature a CR 1/2 sample infected zombie for your convenience.

Conclusion:
Editing and formatting are very good, I noticed no glitches. Layout adheres to the 2-column full-color standard of the series and while I’m not big on the social icons and dispersal of non-gaming parts through the pdf, from an aesthetic point of view, there is not much to complain about. The pdf comes with the classic Crawthorne-artwork as well as the zombie artwork and a nice piece of a decayed zombie head. The pdf comes with a second, more printer-friendly iteration, which is nice to see. The book has no bookmarks, but needs none at this length.

Steven Trustrum’s take on making infected zombies is surprisingly cool: While not everybody will be excited about the Called Shot-mechanic for brain attacks, it makes sense and enhances the theme nicely. All in all a good, fun little offering, well worth a final verdict of 4 stars.