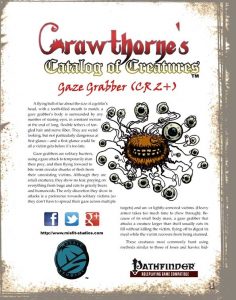 So, what are gaze grabbers? Think of them as basically oversized tribbles with a toothy mouth and several flimsy eyestalks attacked. They obviously have all-around vision and may, as a standard action, direct their gaze towards a victim within 30 ft., who then must succeed a Dc 9 Will-save to avoid being stunned…if that sounds low…well. The more eyes the gaze grabber uses, the higher the DC becomes: +1 per eye directed at a target. Nice: When the creature gets into melee distance, the flexibility of its eyestalks suddenly makes it impossible to properly avert one’s eyes, though the potency of the collective gaze is obviously still diminished. Only half the eyes can increase the save DC when used thus…but do you round up or down? No idea there. Attacking and eliminating eyestalks via both called shots and on the fly methods are covered here and while the base gaze grabber at CR 2 is assumed to have 3d12 eyes, those with 20+ have a CR of 3, those with 30 or more a CR of 4, accounting for the then nigh-unbeatable DCs of these tiny aberrations. Now it should be noted that the creature’s bite attack’s base damage, at 1d4, is slightly beyond the standard for Tiny size, which would be 1d3.

As always, the pdf comes with 3 solid adventure hooks to employ the critters.

Conclusion:
Editing and formatting are very good on both a formal and rules-language level. Layout adheres to the 2-column full-color standard of the series and while I’m not big on the social icons and dispersal of non-gaming parts through the pdf, from an aesthetic point of view, there is not much to complain about. The pdf comes with the classic Crawthorne-artwork as well as the gaze grabber artwork, which is decent. The pdf comes with a second, more printer-friendly iteration, which is nice to see. The book has no bookmarks, but needs none at this length.

Spike Y Jones’ gaze grabber is a decent creature; while it is a one-trick pony, its one trick is creative in its execution. That being said, it is a save-or-suck critter that either goes down fast or, in groups, can TPK whole groups of unlucky PCs. All are stunned and eaten, that’s it. Attacking the eyes themselves, considering the low HP and sucky AC of the gaze grabber, makes for a bad proposition, which does undermine somewhat the tactical dimension of dealing with these critters. While not bad per se, the critter thus falls a bit short of the potential the concept has. My final verdict will clock in at 3.5 stars, rounded down to 3 for the purpose of this platform.

You can get this critter here on OBS!