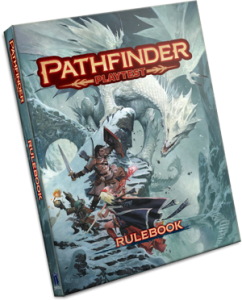 So, I do have a couple rather disjointed points this time around that probably can best be summed up as “Math” – I know, I know, I’ll try to not be boring. 😉

Anyways, as most folks who ever tried Mythic Adventures or high-level gameplay for that matter, have noticed, at one point, Pathfinder tends to devolve into what was colloquially termed “rocket-launcher tag” – I think of it as Insta-gib-mode, but we all get the idea: At one point, offensive capabilities greatly outclass defensive ones in the game. (Excluding some critters by Everyman Gaming or Rite’s high-level adversaries…or legendary games’ mythic adversary books – there’s a reason I love all of them…)

Now, I did have a character in my home-game, who, courtesy of a ton of supplements, min-maxing and rage-cycling, could stand up to pretty much ANYTHING; it took truly phenomenal effort to kill that character. So yes, making a super-potent tank in PFRPG is very much possible. That being said, the amount of effort required to do so is far beyond the amount of effort required to make a decent offense-based character. From deadly bow-users mowing down legions of foes to Vital Strike-builds to two-weapon-shredders, there are a ton of ways to increase your damage-output, and less to actually withstand these assaults. So, as far as I’m concerned, I’d really love to see:

This ties in with one of my biggest gripes regarding item-classes: Shields. Shields in PFRPG suck, big time, at least compared to what they offer in literature and similar media: Huddling behind shields to escape a rain of arrows? To withstand a dragon’s breath? Yeah, unless you have the right equipment and the right build, you won’t be doing either. Since we lose damage via two-handing or two-weapon fighting, I think that shields that matter on a strategic level would be awesome – they should grant tangible options, beyond just an AC-bonus.

While we’re on the subject of items and math: If I could have one wish regarding PF Playtest/PF 2, it’s that the math should no longer assume these damn cloaks of resistance, rings of protection, etc. You know – the items that every group sooner or later has, not because the players or characters want them, but to make the math come out right. I *LOATHE* those with a fiery passion. Magic should not feel mundane, and magic items should feel magical, not be essentially required.

Since we’re on the subject of magic items: I do not object to item levels and the like in Starfinder; they fit the game. I do certainly hope that we won’t see the like in Pathfinder…and yet, I kinda do. You see, Pathfinder, with fantasy aesthetics, could use items that remain relevant over the levels. Heck, it’s why I love Purple Duck Games’ Legendary Items so much: In case you were wondering: These are magic items that improve with the characters that wield them, often unlocking unique properties, while remaining relevant over the levels. In my home-game, these items have all but supplanted many of the boring standard items and my players LOVE them. I’ve designed a ton of them myself. In Starfinder, linear progressions make sense; in PFRPG 2.0, I’d love to see items that improve and remain relevant, but they should have some character, not feel like something you could buy in Golarion’s equivalent of an adventurer’s Walmart or Target.

While we’re on the subject of items:

The fact that your paladin was a blacksmith’s son often doesn’t really figure into the game, considering the prohibitive time-investment required.

This brings me to another aspect: I really like the *idea* behind traits. You know, make upbringing, environment etc. matter…but the implementation often boiled down to just another +1 bonus to optimize. I really disliked that – and some 3pps concurred, with e.g. Rite Publishing offering quite a few traits that are very limited in how often they can be used, but when they *are* used, they matter.

While we’re at the subject of small bonuses that often boil down to none-too-exciting further optimization work: Favored Class Options. I HATE them. Imagine me rattling off AM’s monologue from “I Have No Mouth And I Must Scream” there; in 99% of the cases, favored class options are BORING and don’t contribute much meaningful modifications to the game. Axe the whole concept, bury it, and never talk about it again.

While we’re on the subject of pointless bonus-accumulation: Know what every player and GM I know HATE: Feats that net you +2 to two skills. They sucked in 3.0. They sucked in 3.5. They sucked in PFRPG. They are lazy design par excellence. No player takes them because they like them, ever – they are only ever taken to cap out a skill specialist. I never ever want to see these again, much less be forced to take one to qualify for feats, PrCs, etc. Instead, provide feats that expand the skill-uses with meaningful options.

Since we’ve come to feats…it’s time to slaughter some sacred cows. I’m looking at Endurance, Dodge, Mobility…you know the type of feat. The feats you either get from a class as bonus feats (Yay – you never would have taken them otherwise…), or that you have to waste a feat on to get to the stuff you actually want to do. Once more, this should not mean that the concepts underlying the feats were bad – just that their implementation sucks. Mobility? Don’t get me started. Endurance? Should matter more in the wild and not be outclassed by endure elements from the get-go. Dodge? Good idea, but the benefits are too paltry.

All right, that’s it for now!

If you enjoy these types of posts and my reviews, please consider donating to my patreon here to keep the lights on.

As always, I remain yours,