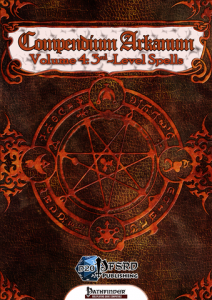 This installment of the Compendium Arcanum-series clocks in at 114 pages, 1 page front cover, 1 page editorial, 1 page SRD, 1 page advertisement, leaving us with 110 pages of content, so let’s take a look, shall we?

Now at this point in the series, I have already rambled long and hard about basic scaling mechanisms, so in case you’re not familiar with my other reviews of the series – the heightening/diminishing can work via various means, first of which would be a modification of the spell’s numerical values, which is usually referred to as numerical escalation. Secondly, one would find some spells with modified target/reach/durations in several spells, with some allowing for what amounts to effects akin to the (communal) spells. Another scaling mechanism modifies the casting duration, though that one is admittedly a rarer one – still, heightened absorbing touch receiving a duration of permanent is pretty much a completely different assumption. Beyond these, this series sports what is termed a merger, usually denoted by a specific icon and a special note – in instances like that, multiple spells have been merged into one, usually for conciseness’s sake to prevent redundancy between collated less/regular etc. versions. Other spells do not extend/diminish the spells in depth (i.e. does not in/decrease numerical values), but rather go into the breadth, providing additional options not possible with the original spell. It should also be noted, that this book covers 3rd level spells and as such, some spells that are second level for some classes (and thus were featured in the previous installment) will necessarily make a new appearance herein, only for different classes.

So, let’s see whether this installment of the series has inherited its direct predecessor’s at times off balancing also haunts this pdf or whether it represents a return to form. Reduced duration and granting all simple weapon proficiencies to anthropomorphic animals constitutes an interesting take in my book, for example. Now I know that you’ll be rather excited about the iconic spells, so let’s take a look at animate dead, shall we? For once, this and its lesser brethren have been merged and the lesser version now covers essentially that base. The heightened version treats variant zombies/skeletons as their regular HD now – which is a solid take in my book. Black tentacles slightly increase their general performance and now also render targets prone in their improved version, whereas blink’s diminished effects reduce the misses down to 20%/10% respectively – interesting and not much to complain about. Said spell’s heightened version now also allows for the reliable phasing through solid objects, which also renders it an interesting scaling in my book.

Now I have a pet-peeve with create food and water – I do NOT like the base spell, since it pretty much renders survival-style scenarios less challenging, but its heightened effects herein, which make the food last for 1 day/level, allow for the short-term stockpiling of resources, which, while not OP, can certainly be rather unpleasant and undermine the effects of the duality of famine and disease in a fantasy world – where before, one could use spells to alleviate one, now the option to short-term stockpile resources allows for the combat of this dual threat in a significantly easier way, provided enough clerics of sufficient level are at hand. not bad per se, just a pet peeve of mine you should be aware of. Now adding no-save damage for creatures damaged by sunlight to the daylight spell’s heightened effect feels a bit like it doesn’t really fit – a) the damage is not enough to make it a good option at level 4, and b), it is extremely disruptive to a very specific breed of foe – a “dismiss to deal x”-take would probably have been the more interesting option here.

AoE dimensional anchor as a heightened effect may be powerful, but also rather appropriate, but what about dispel magic? +/- 4 to the check, which is okay, I guess, but at 2nd level for the diminished version, still pretty strong. Now where the scaling of damage and types becomes pretty odd, is with e.g. force punch – its diminished effect still deals full damage, but does not push the target. Force punch deals force damage, d4 per caster level, up to a maximum of 10d4. Compare that with the cap of similar 2nd level spells. Notice something? Yeah, they cap earlier AND sport a weaker damage type. See, and that is an issue. Fireball’s 2nd level version caps out at 5d6 as well, yeah, but it still outperforms quite a few of the regular 2nd level spells by virtue of range and AoE, so there we have another issue. Conversely, a second save to avoid catching fire for the 4th level version is interesting, but I’m not sure whether it justifies the additional level. Thankfully, the game-changer haste’s heightened effects of +4 initiative are not that strong, but the diminished version? Range touch and only one creature still means haste for lower levels – probably one of the most powerful spells in the arsenal…no, this needs further nerfing.

On the more positive side – rendering helping hands incorporeal and allowing them to pass off messages per gestures etc. is a stroke of genius and well worth of two thumbs up for the author! Now I absolutely OBJECT to greater invisibility becoming available as a second level spell, even with a duration of concentration/max 5 rounds – regular invisibility is strong enough. Invisibility Purge’s heightened version even allows for the negation of non-magical, extraordinary invisibility, which is another thing I’m not comfortable with. Lightning bolt‘s scaling suffers from issues similar to fireball, though its heightened version calls for a FORT-save in addition (two different saves = higher fail probability for either!) to avoid becoming staggered for 1d4 rounds. Overkill much? Once again, scaling. On the plus-side, the rather powerful litany-spells featured herein receive pretty solid scaling. Magic Circle‘s denying their trapped creatures the option to test them via their SR is an interesting choice – not balance-wise necessarily problematic, but a significant change on how magic works, so DMs should contemplate the ramifications – it works differently for a lot of summoned beings, changing ever so slightly, but significantly the way outsiders ought to interact with mortals.

Neutralize Poison’s heightened effect also is such a game-changer – it can reverse the detrimental effects of poison encountered in the last hour, rendering explorations into inherently poisonous areas much more feasible – once again, not necessarily a bad choice, but one that changes some basic assumptions on the working of spells. Obscuring multiple objects is a pretty interesting idea for a heightened effect. Purging Finale‘s heightened version, on the other end, which allows for the removal of a condition in a significant area, feels over the top and like quite literally a spell that can, in one blast change the entire tide of a battle. Now more of a personal gripe, I don’t like remove disease’s heightened version, which also cures disease-caused ability point damage – rendering diseases even less effective/frightening than they already are…not a fan, but will work great for campaigns and groups with less gritty tastes than mine. Sepia Snake Sigils can now be attuned to specific creatures or creature-types, for once again a rather interesting array of options, while e.g. slow thankfully does not receive a significant upgrade in power….which brings me to another problem with the new heightened/diminished spells that came up in play – can diminished spell-versions be used to counterspell their antagonist spells, even if said spells are the regular/heightened versions? Could e.g. a diminished haste be used to counterspell a heightened slow?

By the way, remember me complaining about new effects not receiving the correct descriptor in a review of a previous installment? Well, e.g. Wall of Fire‘s heightened version gains the [light]-descriptor and can cause temporary blindness to creatures passing through it, provided they fail a save. Water Breathing’s heightened version can either be considered awesome or terrible, depending on your taste – the version renders immune to inhaled toxins à la cloudkill et al. and even allow you to breathe in a vacuum, thus surpassing even the hex that usually is required to deal with air-borne toxins. This is a HUGE game-changer that changes the way magical warfare AND exploration work, so once again – be careful!

Editing and formatting is pretty solid on a formal level – on a balance-level, some spells imho would have benefitted from closer scrutiny. Layout adheres to the easy-to-read, well-presented 2-column standard and is pretty printer-friendly. The added icons for heightened and diminished versions make reading the pdf easier – kudos. Artwork is a mix of stock-art and symbolic representations – not beautiful, but functional. The pdf comes bookmarked for your convenience – one for each spell! Kudos! The pdf also comes in two versions, with one sporting extensive hyperlinks to d20pfsrd.com’s shop and the other being free of them, should you prefer it that way.

Timothy Wallace’s 3rd level spells can be considered a significant step forward from the previous installment – first of all, there are less formal glitches, less all-out issues. That being said, yes, some spells herein are in my opinion quite frankly overpowered and could have benefited from a closer scrutiny/balancing. These, however, are significantly less numerous than those in the 2nd level installment. 3rd level is generally considered the first true game-changer level for spellcasters and this is represented herein – in a way that completely differs from what I would have expected.

In one sentence – all the little wheels and screws turned in this pdf change radically how a magical world works. The integral changes in breadth of the spells can have huge ramifications for how magical societies work – binding outsiders, for example, has become significantly easier, making summoner-cultures more feasible.

Conversely, these spells make spacefaring ridiculously easy and possible, they render explorations into poisonous areas easier and radically change how assassins can operate – poisons and diseases got hard hits with the nerf-bat. In one sentence: The spells herein support a significantly more high-fantasy playstyle, regardless of the additional power for all spellcasters. Gritty worlds can see their very basic premises unraveled by the changes, so DMs-beware! That being said, neither counterspelling of opposing spells, nor the power-gain induced by the added flexibility, nor how spell-like abilities work in this system are addressed – but that is probably old news to you by now. Is the system bad per se? No, it’s not. It’s a labor of love in the truest sense and it shows – it may actually be just what you wanted.

But it does sport issues, it can cause problems and it most definitely is not for everyone. All in all, one step in the right direction – for high-fantasy groups (or DMs looking for a way to make spontaneous casters more flexible – just make these available for them only), this may very well be pretty awesome. Still, the problems cannot be denied, hence my final verdict will clock in at 3 stars, +0.5 stars for high fantasy campaigns that see no problem with the issues I mentioned – a quintessential mixed bag.