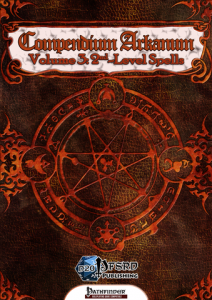 This installment of the Compendium Arcanum-series clocks in at 121 pages, 1 page front cover, 1 page editorial, 1 page SRD, 1 page advertisement, leaving us with 117 pages of content, so let’s take a look, shall we?

After the unfortunate cantrip-debacle of the second installment of the series, we here do not have the issue with potential infinite casts, remaining with only a significant increase in flexibility. At first glance, one can see a nice little improvement in layout -diminished and heightened effects are now denoted by small, neat arrow-icons, making the actual use of this pdf more comfortable – nice! On the downside, at this point I feel obliged to mention two significant gaps in the system that were simply not relevant in the first installment and paled behind the vast issues the 1st level-installment had. Number 1 would be that the pdf does not specify how e.g. light/darkness-counterspells work – can e.g. a diminished light counterspell a heightened darkness? The pdfs remain silent on this. Secondly – what about spell-like abilities? How do they work within in the frame of this system? No idea.

Now on the plus-side, adding cure light wounds to allfood’s heightened effects would be a pretty cool idea, going into breadth, rather than depth (though the former spell is not italicized) and animal aspect’s diverse heightened effects (one for each animal chosen) make for a cool idea. Arcane Lock’s heightened effect allows you to specify a password to temporarily bypass the lock – which makes more than just a bit sense and can be used for plenty a cool narrative – it is in instances like this where Timothy Wallace’s talent definitely shines. On the downside, there simply are quite a few guffaws herein – blur’s heightened effects e.g., among others, changes target to “creature touched” – which the spell already has – instead, it should clarify the number of creatures to be touched. Why? In another issue, the spell’s heightened effects allow you to freely assign the duration in 1-minute intervals among creatures touched – which renders the spell effectively a kind-of-(communal) spell, so why not simply utilize that terminology?

Chameleon Stride would be an example of a diminished effect gone horribly wrong, with the diminished version providing ” You gain a +10 bonus on Stealth checks, but are not granted any concealment. The bonus increases to +20 at caster level 5th, and to +30 (the maximum) at caster level 9th.” -no concealment, yes, but a bonus that may be on par (and as untyped, stacking) with invisibility. Remember, that would be for a level one spell. The heightened version provides concealment for all attacks further than 5 feet away. This renders reach weapons rather useless and also eliminates any possibility to target creatures with spells and effects that require line of sight. For a level 3 spell, that’s pretty sick.

On the plus-side – using a heightened command undead without needing to speak the commands, instead going for the telepathic route once again can be considered a stroke of genius – undead ninjas with a necromancer-commander? Why not? Nice! Lesser Confusion/Confusion have been merged into a nice combined version and a similar merger has been made for continual flame and light: Makes sense, as does the combination of pit trap/spiked pit. Instant revelation of all information via detect thought’s heightened effect once again feel a bit problematic in my book.

On the plus-side, integration of all relevant and required information for e.g. catching on fire is a pretty neat added convenience. Moving flaming spheres to execute ranged combat maneuvers with a concentration-check may be a bit too much, though – ranged maneuvers at what amounts to a full BAB-class bonus, plus trait/feat-trickery is very strong, especially considering the additional damage/AoE-upgrade. Stinking Cloud has been delegated to being the heightened version of fog cloud, which may be a bit too weak for 3rd level.

Extending the effects of grace to creatures touched would constitute another gripe I have here – the base spell is OP enough, allowing it to be extended to other characters makes it ridiculously powerful, even for 3rd level. Share Memory’s diminished effects allow you to share memories only for a limited time, allowing for significantly more complex narrative frames – so yeah – this one is pretty brilliant. Silk to Steel‘s heightened effect is pretty awesome, allowing you to use it either for defense or as a scorpion whip. Here one might nitpick that the spell does not confer proficiency, but it doesn’t need to – the wording specified “as if” – and in dubio pro reo, so this one’s safe from my nagging. Heightened Touch injection sans chance to poison yourself, even without poison use, also makes sense – at least for non-alchemists. Spitting poisons transmuted from potions makes for another interesting option and the option to make undetectable alignment kind of communal via the heightened version also is pretty cool. Adding minor energy resistance of your choice to a web shelter also is a rather awesome decision.

Editing and formatting is pretty solid on a formal level – on the rules-level, the book could have used a close look by a solid developer. Layout adheres to the easy-to-read, well-presented 2-column standard and is pretty printer-friendly. The added icons make reading the pdf easier – kudos. The pdf comes bookmarked for your convenience – one for each spell! Kudos! The pdf also comes in two versions, with one sporting extensive hyperlinks to d20pfsrd.com’s shop and the other being free of them, should you prefer it that way.

Timothy Wallace, generally, knows what he is doing. However, this is longer than 120 pages and thus, I wasn’t surprised to see some hiccups here – some of the new options presented here are quite frankly not appropriate for the spell-level to which they adhere – at least in my book. Now usually, I’d be slightly more lenient in that regard, but as anyone who has ever run a game with compendium arcanum-rules can attest, these modifications significantly enhance the flexibility of all casters, thus making the required balancing all the more peculiar. The series is notoriously quiet on its rather significant effects on balancing – personally, I’d suggest taking a very close look at whether your game is up for the increased caster-power provided here. Especially prepared casters imho simply do not require the additional flexibility. But that won’t influence my verdict – what will, though, are the glitches that can be found and the at times very problematic, even broken effects. HOWEVER, at the same time, the (communal)-tricks, the spell-mergers…there is a lot of cool material to be found herein, some of it downright inspired. So while the balance-concerns within the system would usually have me round down, I’ll instead settle for a verdict that reflects this as a quintessential mixed bag, for a final verdict of 2.5 stars, rounded up to 3 stars for the purpose of this platform.

You can get scaling 2nd level spells here on OBS and here on d20pfsrd.com’s shop!