Club Anyone: An Interface Zero Novel 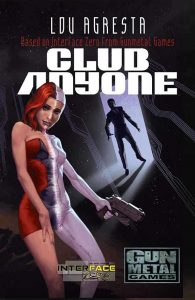 And now for something completely different!

Club Anyone is a novel that clocks in at a total of 308 pages of content, with visual representations of the setting helping to envision the setting, TRIC city, on Mars.

This review was requested by one of my readers. I have received a print copy of the book for the purpose of an unbiased review.

It should be noted that this book contains well-written descriptions of sex, substance abuse and the like – these are not gratuitous, and they are written in a concise and well-presented manner, but I felt the need to state this for your convenience. While I try to be as SPOILER-free as possible in my discussion below, I do SPOIL some structural surprises that the book has to offer. I only do so in an abstract manner, but I do so nonetheless in my discussion below; if you like the notion of cyberpunk/scifi-noir, then check this out sans reading further; if you’re skeptical regarding the genre, then you may want to continue reading.

So, let me preface this review with a couple of observations: This book takes place in Gun Metal Games’ Interface Zero setting, which means that it can draw upon a wide variety of different concepts and established lore – at least in theory.

This is, at once, a potential boon for the book, and, if one takes a look at the books released for other roleplaying games settings, a potentially huge issue. Don’t get me wrong: I have devoured a ton of Dragonlance, Forgotten realms, etc. novels in my day…but at one point, they all started to bore me to some degree. A central issue of books based on roleplaying systems is the question of system-adherence and structure: Roleplaying settings, system-immanently, expect not a single protagonist, but rather a whole party of them, and in my experience, there’s a pretty good chance that one or more characters end up as annoying – and the more such protagonists there are, the more disjointed is the sense of immersion, the less room you have to develop the characters in question. We can add to that the huge issue of the adherence to the system, which represents a gigantic Catch 22-scenario: If you deviate from the system’s realities, you end up disappointing the expectations of those wishing for a faithful depiction of the realities of the setting. If you adhere to them, you’re often left with issues regarding the story that you actually want to tell – the rules don’t always lend themselves to helping make the experience of telling a novel’s story exciting.

The second issue pertains lore-depth: You can’t assume every reader to be intensely familiar with obscure setting-details, but explaining them all in detail can result in huge, and potentially boring exposition dumps. This is an issue that we can observe with many comic books nowadays, where the interconnectedness and background canon has reached a ridiculous depth that makes them less accessible than they once were.

Thirdly, there is the issue of the type of story: Many books falter due to trying to tell a pen-and-paper-RPG-story in the guise of a linear book; perhaps one with only 2 – 3 players, but nonetheless. Combined with the above, this makes for quite a burden for the author, even before taking the need to be canonical into account.

Let it be known that “Club Anyone” manages to navigate these pitfalls admirably; to the point where the book made me intensely curious to read more from the setting. It does so in a pretty smart manner: Instead of jamming exposition dumps into the narrative where they wouldn’t fit, the book introduces a precious few concepts that all characters would be familiar with (and thus not talk about) in the beginning of a few of the chapters, in the guise of Encyclopedia Brasilia entries or a delightfully amusing advertisement for a piece of tech. Note that I experimented with skipping these, and the story and plotline STILL work without a hitch; they just serve to bring you up to speed with the setting.

The more important decision, and what really ultimately made this book work, is the protagonist Derek Tobbit. He is not a superhero, an outlaw, a chosen one. He is just a regular megacorp programmer, one who specializes in bioroids – think of these basically as lobotomized, programmable clone/machine hybrids. In the first chapter, the prologue if you will, we witness Derek become a hero of sorts on his first day at work on Mars after migrating there for the job…only to have him plunged into a personal catastrophe that spirals out of control on a personal and more global scale.

This approach manages to achieve something rather impressive, namely that it, by letting us share in the protagonist’s triumph, immediately generate sympathy for the man, which is then further developed upon. We have a relatable main character from the get-go. This is so important, because the novel could be described as a scifi-noir-thriller: We do have a very human and fragile individual here, not an iron-clad superman, but the cynicism that is so prevalent in noir aesthetics, is, at least in the beginning, absent.

Aforementioned personal tragedy and struggle then proceed to have this average Joe become pretty much steeped in the vortex of grime and twilight that we associate with noir aesthetics; in this, the early section of the book, the writing becomes pretty bleak, cynical and suffused with a rather potent sense of pessimism, one constantly enhanced by the dystopian corporate control, the omnipresence of augmented reality. It is here that, at least for me, some of the most remarkable (and wise) sentences throughout the book exist. The interaction with the severely limited cab-service AI Aygee, which poignantly remarks “Sorrow exists, Derek Tobbit,” serves as one example of this notion, and also as a kind of leitmotif. It should be noted though, that the book remains more personal and never reaches the sense of cosmic bleakness and nihilism that e.g. suffuses the “Three Stigmata of Palmer Eldritch” or similar books by Dick et al. We remain deeply entrenched in the noir-aesthetics, and indeed, the book, without putting too fine a point on it, manages to retain the human dimension that is so crucial for noir-aesthetics. In a way, the Augmented Reality angle that is so important throughout the book represents a subtextual transgression of the boundaries of how reality is read by the characters, and proves to be the catalyst for the most potent narrative forces, both benign and malignant.

Indeed, one could argue that “Club Anyone” is exceedingly successfully and engrossing in the way it manages to encapsulate the tropes of the noir genre, and then proceeds to slowly subvert them; yes, there are plenty of examples regarding the tropes you’d expect within, but they are, on an intrinsic level, subverted in their tone and outcome. In a way, the book, like the leitmotifs of augmented reality and corporate control, controls them on a structural level, but transforms them in a rather benign and surprising manner; at one point, the narrative ceases to revel in the grime of Blade Runner-esque darkness, and transforms into a page-turner, a high-octane conspiracy high-scifi page-turner.

It is this bait and switch that represents one of the strongest points of the novel, and one of its weaknesses, depending on how you read it: On the one hand, there is careful deliberation in the motif of rebirth, which is also applied to genre that you’d associate this book with. On the other hand, I’d lie if I said that I didn’t get a kind of thematic whiplash during this turning point. Once it has passed, things happen quickly and ferociously, and the plot speeds up significantly. At least for me personally, this second part of the book felt like it could have used a couple of extra pages. There are a lot of unique and captivating ideas and set-pieces briefly touched upon, but ultimately, this section rushes to the inevitable conclusion in a more sped up manner than I would have liked; with 50 – 100 extra pages fully developing the transition in genres and character growths during it, the book would have ranked as one of my all-time favorite scifi novels.

As written, the almost post-modern playfulness with genres and expectations does not realize its full potential in this second half of the book. However, that is not to say I did not enjoy myself – quite the contrary! While this second half loses a bit of the gravitas of the first half, it did, even in its imho weaker sections, provide more entertainment than the entirety of the sluggish blandfest of oh-so-critically-acclaimed “2312”; it’s also smarter and, in my opinion, more successful in its world-building/setting-utilization than that book.

In short: “Club Anyone” is a surprisingly fun and intelligent novel; it sports interesting and well-written characters you can relate to; its plot and tweaks actually managed to entertain and often, even surprise ole’ me. It’s also the least bleak noir-story that can still be called “noir” I have ever read, and for that alone, deserves accolades. Whether you consider the very condensed narrative a plus or minus depends on your perspective; personally, I could have seen this cover a full trilogy of books – easily! That being said, in spite of not being 100% enamored with the second half of the book, I have rarely found myself this profoundly touched by a science-fiction novel, as in the first half of this book. Considering that this is Lou Agresta’s first published novel, it represents an impressive achievement in more than one area: The characters are relatable and interesting, the pacing had me turn page after page; the prose is oftentimes profound without being artificially obtuse, and the deviations from genre-conventions make the book stand out. Similes and metaphors, both cleverly tweaked and original ones, provide an optional cosmos of associations for the well-read that adds a surprising level of associative depth to the proceedings.

Club Anyone is a really captivating proof of a very promising talent, one that has me excited for future offerings. Taking the freshman bonus into account, my final verdict will clock in at 5 stars + seal of approval. Even if you absolutely loathe noir storylines, this is worth checking out.

Sorrow exists, yes…but so does happiness.

You can get this fascinating novel here on OBS!

Want print? You can find that here on amazon!