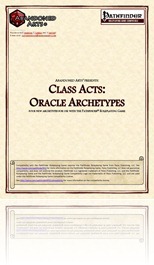 This pdf from Abandoned Arts is 4 pages long, 1 page front cover, 1 page SRD, leaving us with 2 pages for the new oracle archetypes, so let’s check these out!

The first archetype, the doomsayer, gains access to intimidate as a class-skill and replace their first level revelation with the option to demoralize foes as a move action and at 7th level demoralize foes adjacent to shaken, frightened or panicked beings in exchange for yet another revelation. Ok, I guess, but mechanically oh so bland.

The second archetype, the Haruspex, replaces the revelation at 1st and 11th level for a hex and grand hex respectively as well as ritualistically disembowel a creature and read the future from its entrails – cool replacement for the 7th level revelation and an overall short, but sweet sword & sorcery-style archetype that would also make for a cool way to highlight sinister oracles or those from primitive cultures.

The third archetype is the Indwelling, which features a rather complex mechanic with the indwelling spirit: Replacing the oracles curse by being entwined with a spirit, the oracle becomes susceptible to outsider-targeting spells like banishment (which deals damage) and circles of protection, but also opens her eyes for the spiritual, becoming not only more aware and able to cast guidance at will, but also granting true seeing at higher levels. Also, at 1st level they must take the new two minds-revelation for a bonus of +2 to will-saves versus enchantments and later even a reroll to represent the dual minds and at 3rd level, you can treat your str-score as if it was your cha-score for a round. The latter revelation can be used more often at higher levels.

The final new archetype is the Oracular Opiate, suffering from the curse of addiction to a drug and only having access to mystery bonus-spells while drugged as well as gaining a +4 bonus to disbelieving illusions and the option to exhale a haze of hallucinogenic vapors into adjacent squares. This is actually the best take on the concept I’ve seen so far and should also make for an interesting option to play.

Editing and formatting are top-notch, I didn’t notice any glitches. Layout adheres to Abandoned Arts’ 2-column, no-frills standard and the pdf has neither bookmarks, nor artworks, but needs none at this length. All right, the Doomsayer is bland in my opinion – the mechanics have been done before and in more interesting ways. Thankfully, the same cannot be said about the other 3 archetypes, which all serve their niches surprisingly well, have one or two neat signature abilities that set them apart and should work as nice character concepts. Also, I universally would have wished for all of them to be longer and more complex – seriously, that’s usually a good sign, especially when I don’t ask for more length due to a bad bang-for-buck ratio. Indeed, while short, the archetypes herein work nicely and for a buck, they are a valid and good purchase, though still one I would have wished to be longer. Thus, my final verdict will clock in as 4.5 stars, rounded down to 4 because with just one more page, all archetypes could have been developed further to the point of utter, mind-boggling awesomeness.