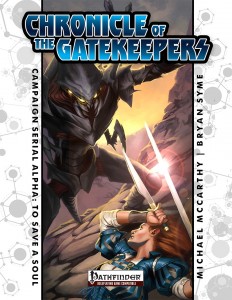 The first book of the Chronicles of the Gatekeepers-saga clocks in at 22 pages, 1 page front cover, 1 page editorial, 1 page SRD, 1 page back cover, leaving us with 18 pages of content, so let’s take a look!

This pdf was moved up on my review-queue at the request of my players.

But before we do, let’s just talk a bit about what this book represents – essentially, this series can be considered a kind of Third-Party Crisis of Infinite Earths, a campaign with a fixed beginning (this book) and a fixed end, with all other sidetreks in between representing excursions to various campaign settings, allowing you to present a setting-spanning threat, engage in world-hopping. I absolutely adore this concept, but can this module live up to the awesome premise?

The following being an adventure-review, potential players may wish to jump to the conclusion to avoid the SPOILERS to come.

All right, still here? Great! There are gates spanning NeoExodus – and there are gates spanning the planets. Created by mysterious beings, these Nexus Gateways are growing more powerful by the day, for their creators, the Atlanteans, have returned….but alas, not as benevolent people, but as a race most desperate, for their home world is in danger: One of their colonies, far removed, has encountered a world-ending threat – and so, the decadent empire slouches into activity, sending forth their insectoid vespan servitor-race to collect the most capable and least scrupulous of minds from all the worlds to stem the tide against a threat so dire, it cannot be fathomed. But none of that is known by the PCs from the get-go – instead, this begins as pretty much a local threat – in any world you like.

The default assumption is that the funeral of a wizard (one Merlet Chem, benefector to the PCs – or similar mentor-figure) was unduly interrupted by a psychopomp, providing dire news – the wizard’s soul has not passed on to the afterlife. Responsible for this rather troubling state is a necromancer called Pushae, an expert on the subject of the manipulation of souls – and so the PCs have tracked this man down – his trail leads right into a small ruin within a secluded hillside. The fully mapped ruin (which also comes with a player-friendly version) is pretty much (apart from a minotaur skeleton), a pretty conservative, small dungeon that will lull the players into a sense of “been there, done that”- by design. For within these ruins lies a shimmering portal, guarded by the strange vespans – and it is obvious that Pushae has ventured through this gate!

Here, the true dungeon begins – as the PCs go through the gate to Exodus, they find themselves in similar ruins – they know the layout…but they also face resistance from the insectoid vespans! When a manticore (!!!) attacks, the PCs have a chance to make friendly contact with one of NeoExodus’ strange races, a Sasori, who assists them in the battle and also can act as a guide. But where did Pushae go? Well, they can track him down, but the overland journey down the mountain on which they are (again, supplemented by a beautiful overland map) will prove to be pretty challenging – including a rather deadly grit-storm and traps left behind. Trekking through the corpselands, cursed coins that attract the walking dead prove that not all treasures should be looted. As they finally reach the Koryth steppe, more vespans stand between them and the village of Teryth (with full statblock) – here, more information on the movers and shakers of the settlement are provided, alongside some interesting…developments for those familiar with NeoExodus-lore. *cough* Church of Makash */cough* Here, the sasori proposes an alliance to hunt down the wizard – but with which sidetrek you’ll continue this saga, depends on your whims as a GM…

The main meat concluded, we are introduced to the Vespans as a new creature, including their unique weapons and the Nexus Key the PCs can attain – though that one will come into play at a later point… The racial implant Sasori Plate and Large-Biter’s stats complement the pdf.

Editing and formatting are top-notch, I noticed no glitches. Layout adheres to a gorgeous two-column, full color standard and the pdf sports numerous pieces of beautiful full-color cartography, which also comes as player-friendly versions. The pdf is excessive in its use of beautiful full-color artwork – this is one damn good-looking pdf! Oh, and it comes with a second, more printer-friendly version. The pdf comes fully bookmarked with nested bookmarks for your convenience.

I was somewhat dreading this one – LPJ Design *can* make absolutely gorgeous, awesome books – when the company isn’t winging it. This is a great example for what the company is capable of: For once, this is an absolute BEAUTIFUL book – I mean it. You’ll be hard-pressed to find modules with this much beautiful full color art. More importantly, its focus is right – it gets the PCs from a more conservative world and drops them right into awesomeness, resulting in hilarious “We’re not in Kansas anymore”-moments. Most of all, it provides a good motivation for the quest, sets up the primary antagonists (at least for now) and provides a nice mix of challenges the different classes. Yes, it’s kind of linear; yes, it leaves you craving more – that’s what it’s designed for.

It also is a solid challenge, so that’s nice as well. In fact, the interesting thing is that this way well be one of Michael McCarthy’s most well-rounded modules – as an author, he tends to put a bit too much in his modules, thus diluting the focus. Not so here. This module does what it sets out to do in a formidable manner, namely, make me excited about this saga. Yes, it may not be a grand epic, but it is a pretty furious opening that breathes the spirit of high fantasy. It should also be noted that it plays better than it reads – the change of tone you’ll have in this book can be played up for some REAL fun. Another note – I assumed to see some thematic overlap with Legendary Games’ Legendary Planet AP – and so far, I see none. Theme and focus are completely different and that in particular is just the cherry on the pie. This is a well-crafted, fine opening module that makes you crave more – and what more can you ask for? As a reviewer, I will rate this as what it is – as the first step of a potentially truly grand epic – and as such, this is a damn fine example of the strengths of both LPJ Design as a company and Michael McCarthy as an author. My final verdict will clock in at 5 stars + seal of approval.

You can get this introduction to the series here on OBS and here on d20pfsrd.com’s shop!

You can get the whole subscription here on d20pfsrd.com’s shop!