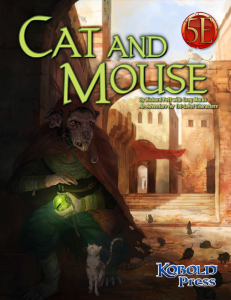 The 5e-conversion of the introductory module to the evocative Southlands setting in Midgard clocks in at 26 pages, 1 page front cover, 1 page editorial, 1 page SRD, 1 page advertisement, 1 page back cover, leaving us with 21 pages of content, so let’s take a look!

All right, still here? Per-Bastet is the glittering crown-jewel of the nation of Nuria-Natal; it is also one of the most evocative, awesome cities I have read within the last couple of years. Through its heart, there runs the eternal River of Sand, guarded by jealous elemental creatures, churning tons of sand in a truly amazing display through the streets of the metropolis. Sometimes, objects of strange origin wash “ashore”, the sand-touched items, often considered to be lucky.

Today, though, a treasure beyond ken has arrived at the shores of the holy city of cats, the minor artifact Grimalkin Eye – which can be used to befriend, fascinate or dominate any feline. Catfolk mistress henna Mjelidi, not a scrupulous being, would give her whiskers for the eye, but, alas, when she learned about it, the item had already found its way into another unlikely creature’s clutches – Raheed, a particularly ugly and unpleasant wererat has claimed the eye…and since found out that it grants him power. Worse, the gnoll slaver Hakaan-al-Khareen Zmirr Nill Mo Chantoor has learned about Mjelidi’s quest…and now wants the eye as well…if only to annoy the catfolk. It is him who offers a counteroffer after the PCs have accepted the job of securing the eye for Mjelidi.

Situated in Per-Bastet’s Perfume district for the most part, the module comes with sufficient basic information, though I’d still strongly suggest getting the amazing Southlands book. In case you are not familiar with it: In spite of being a Pathfinder book, its primary focus is the absolutely amazing setting that loses none of its amazing flavor in 5e – it is a great book regardless of setting. The NPC-conversions of the book deserve both praise and criticism: While I appreciate the respective builds, there are a couple of minor issues here, like the average damage To Hit value being incorrect in Mjelidi’s ranged attack. This does not sink the pdf, but it is a minor flaw. That being said, for example both traps and social skills and the like have been converted smoothly to 5e’s design paradigms – including thrown tins of paint etc. with appropriate DCs, improvised weapon short/long ranges etc.

Well, the module has another interesting angle: It proposes gossip checks, which basically approaches gathering of information as something that can be accomplished via the Charisma-based checks. In fact, the module is pretty…different…from what you’d expect. You see, the counter-offer I mentioned? It may actually be offered peacefully in the fully-mapped house of Hakaan…or, well, the PCs may pretty much murder-hobo everyone: Mjelidi and Hakaan get full stats, the house has traps and servants (and some nice indirect storytelling…seems like Hakaan’s been recently left by his lover…) – this diversity of angles is something I most certainly appreciate.

Anyways, as mentioned before, the trail of Raheed will lead the PCs towards the Perfume district, where a fun investigation through Raheed’s less than glamorous life begins: The trail leads from money-lenders to blind beggars and washing women with truly sharp, lashing tongues that may damage the PC’s reputation, the impression the PCs will get is most certainly not one of a glamorous existence. At any time during this section, the PCs may witness the Grimalkin Eye’s influence with one of the powerful temple cats going berserk…though, again, the PCs have a way to defuse the situation in a smart and non-violent manner! The 5e-conversion of the Bastet Temple Cat is particularly nice and manages to depict its angles in a concise and fun manner within 5e’s rules.

Ultimately, the trail leads to Festering Heth’s…where a local alchemist may confirm having just sold a cheetah to said being. Heth has since captured Raheed and tries to bluff the PCs…but whether they fall for it or not, once again, no violence is actually required. Heth is a coward and if the PCs fall for him, Raheed will escape…which means that the PCs may have to deal with him in his pitiful squatchamber…in the end, both Mejildi and Hakaan will try to get the eye…and both can’t pay what they promised…which would mean violence in the square of the lion, named for the caged animal conveniently here…And yes, if the PCs can play their cards right, they may well double-cross the double-crossers…and get past the final showdown without shedding a single drop of blood. Which is awesome.

One the downside, the module probably leaves the PCs with the powerful Grimalkin Eye, which, while not utterly OP, can enable rather powerful tricks: 1/day dominate beast (not properly italicized), 3/day animal messenger, animal friendship, speak with animals…but on a failure to attune to the item, it may confuse all the cats near the user. This will not break any game, but provide, particularly in the feline-centric Per-Bastet some cool heist options/political angles…so, surprisingly, I’m pretty cool with this! A GM who knows how to run with this will have a blast. The other complaint I can field here would pertain the lack of player-friendly, keyless maps: The book has a ton of nice, full-color maps for the tactical encounters, but lacks a map-appendix or the like of key-less versions to hand out to players, limiting the module in the handout-department unnecessarily.

Conclusion:
Editing and formatting are top-notch, I noticed no significant glitches. Layout adheres to Kobold press’ two-column full-color standard and is gorgeous. The original artwork contained herein is amazing, and the full-color cartography is similarly neat…though the lack of player-friendly versions is a pretty big downside for me. Unfortunately, I do not own the print version, so I can’t comment on the qualities of that one.

Richard Pett is mostly known for horror and macabre modules, but he obviously is no one-trick-pony. Cat & Mouse is an evocative module that makes good use of the amazing Southlands-setting. Furthermore, it can actually easily be run as a module for kids: The options to refrain from killing or shedding any blood while completing this module allows you to play true GOOD heroes…or, as always, you can murder-hobo through it…but why would you, when RPing would be so much more rewarding? And yes, if you’re running this for adults, you can easily emphasize the grime and grit, if that’s the tone you’re going for.

Now as for the conversion, which was done by Greg Marks – it is one of the better conversions and it does show care, that’s for sure. While not 100% perfect, it managed to translate the module well into 5e, maintaining its flavor and identity, while still accounting for the different mechanics. All in all, well done.

Anyways, usually the lack of player-friendly maps would cost this my seal of approval, but the diversity of challenges, colorful characters, attention to detail and the option to run this sans violence are simply too compelling to ignore. While the 5e-conversion is not perfect, it still maintains a very high quality, which ultimately lets me settle on a final verdict of 5 stars.

You can get this great module here on OBS and here on tabletoplibrary.com!