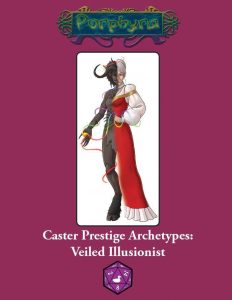 The final installment of the Caster Prestige Archetype-series clocks in at 9 pages, 1 page front cover, 2 pages of SRD, 1 page blank, leaving us with 5 pages of content, so let’s take a look!

The standard base class this prestige archetype is built upon would be the wizard; thus, the class gets d6 HD, 2 + Int skills per level, Int-based prepared spellcasting of up to 9th level and the wizard’s armor and weapon proficiencies as well as 1/2 BAB-progression and good Will-saves. The class gets Eschew Materials as a bonus feat at first level.

At first level, the prestige archetype gains a veil pool of 1/2 class level + the highest mental attribute modifier. As a standard action, the veiled illusionist may expend 1 point to duplicate disguise self, with an interesting disbelieve mechanic – DC 15 + points remaining in the pool. I really like this and am glad it was retained from the PrC, since it emulates fatigue and rewards resource management. Changing disguises while already under the effect of the ability, btw., does not necessitate further point expenditure. Starting at 3rd level, the veiled illusionist can also modify the audible (sound) properties of his chosen disguise, with 10th level extending this to olfactory and tactile senses. At 18th level, this extends to extraordinary senses. Action economy-wise, 6th level allows alternatively to use this ability as a swift action, with 14th level unlocking the option to use it as an immediate action. REALLLY, really cool! A definite step up, as far as I’m concerned – the finer distinction (scent is not blindsight) and the expanded action economy help render this feature more rewarding than in the base PrC.

At the same time, I really wished that the goddess’s veils class feature had been expanded upon – the same races as in the base PrC (human, halfling, elf, gnome, cyclops, naga) are covered. ON the plus-side, the respective veils, while linear, have been assigned to sensible levels and, big plus, the naga veil’s stacking illusion trick has received a bit of a clarification regarding shadow-spells, which is rather appreciated by yours truly. True veil remains the capstone of the prestige archetype.

The pdf also comes with alternate build rules for the arcanist, psychic, sacerdote, sorceror and witch classes. The pdf also provides a rather extensive amount of class-specific favored class options for the core races as well as aasimar, avodim (wasn’t that “Avoodim”?), catfolk, dhampir, drow, kitsune, kobold, samsaran, sylph, tengu, undine and xesa. As a nitpick: The undine’s option has an issue: It increases the range of illusion spells by 5 ft., which is very potent. It tries to eliminate “personal” spells by “with a range”, but RAW, range “personal” can still be defined as a range; as is “touch.” Nitpicking here, since it’s pretty easy to figure out what’s meant, but still.

Carl Cramér’s final caster prestige archetype ends the series on a suitable note: The veiled illusionist has all the makings of a superb prestige archetype, retaining the strengths of the PrC, while making neat modifications to the engine. Now personally, I wished it had more veils or some choice there – the linear progression makes sense, sure, but to me, this aspect could have easily carried more. Similarly, the veil pool mechanic could have carried more class features. It should be noted that I’m complaining on a high level here – the pdf delivers what it promises and going one step beyond certainly is not required. Still, more so than with many of these, I wished it went the extra mile.

Oh well, this should not dissuade you from getting this one, though – it certainly is one of the best examples in the series and thus receives a final verdict of 4.5 stars, though it misses rounding up by a margin.

You can get this cool caster prestige archetype here on OBS!

You can support Purple Duck Games directly here via patreon!
Endzeitgeist out.