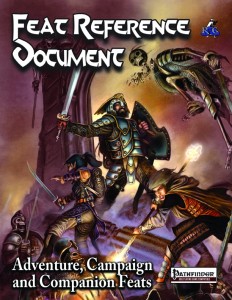 This massive tome clocks in at 282 pages, 1 page front cover, 1 page editorial/ToC, 5 pages of SRD, 4 pages of advertisement, 1 page blank back cover, leaving us with 270 pages of content, so let’s take a look!

So, in case you didn’t know – this massive book collects all the feats released in adventures, companions and campaign-lines by Paizo that have NOT been uploaded on the PRD. This obviously means that this HUGE book has a gazillion of feats – as a reviewer, it would quite frankly be unfeasible to go through them, one by one and analyze them – more so due to them being official Paizo feats, reprinted – and thus not the responsibility of the authors.

It also puts me a strange point as a review – with the obvious goal of collecting material, how do I review what arguably is a compilation? Moreover, more often than not, there is a reason for feats not being put online – said reason being that they often are steeped in the lore of Golarion.

Thankfully, the massive feat reference document does mitigate several of these factors. What do I mean by this? Well, for once, much like Legendary Games’ AP plug-ins, filing off the serial numbers of the feats is done extensively as to not infringe upon the closed IP. The instances are made obvious and easily identifiable via the inclusion of a yellow shade behind the respective changed lines. In the case where worship of a specific deity is required as a prerequisite, the feats utilize wordings that easily make the intended patron deity identifiable – e.g. “a neutral evil deity of darkness, loss and pain that grants the domains…”

Uncommon feat-types, from achievement to betrayal and damnation feats and yes, faction feats, are explained. Faction feats and their explanation is no less easily graspable – when Eagle Knights are replaces with Eagle Lords, no one halfway versed in Golarion lore should be confused. Familiar, Story and Meditation feats can also be found within these pages. When using the called shot rules, targeting feats provide the means you need to customize your options. How many feats are in here? Well, the first feat-table, which covers combat, critical etc. feats spans no less than 28 pages. And yes, more uncommon feat-tables also provide even more tables and texts. So far, so good, right?

Well, that is not where this massive book stops – from the halfling jinx to variant tiefling traits to familiar and school archetypes to fleshcrafting of draconic and other grafts to magic items and spells, there is A LOT of supplemental material herein as well. The obediences and their results, introduced in Inner Sea Gods, is also extensively covered, explained, and made viable as closed IP-free reskins, including demon lords, empyreal lords and much, much more. Primal Magic also can be found herein.

So, obviously, in a book that collects so many sources, we have quite a few that are downright broken. This book handles said cases in a more interesting way that I expected it to – some feats have added caveats, for example the first one, Acadamae Graduate, where a caveat has been added that eliminates the means for undead to cheese it. Said modified text also sports the yellow shade, rendering it easily identified as a change, a practice that also extends to full-blown alternate feats. Some feats are obviously VERY broken – thus, the original feat is provided alongside a revised version that may run smoother or simply be better – or just different. This, I honestly did NOT expect to find and I applaud it.

Now the filing off of the serial numbers may obviously lead to some minor confusion or you may just want to ban a constituent book or look up the original’s fluff – but how do you point towards the source when you can’t say it? With surprisingly smart and creative pseudonyms that are also listed in an appendix by the SRD-contributions – and you probably will understand which book is meant by “The Book of the North”, “Complete History of the Dragon” and the like – yes, it is not 100% apparent at one glance, but looking at the feats and with some experience under one’s belt, it makes sense and imho is a pretty ingenious way of providing a secondary organization principle to this massive collection.

Editing and formatting are top-notch, I noticed a surprisingly small amount of typos and the like in this massive book – surprising and commendable! Layout adheres to a 2-column full-color standard with brownish borders that thankfully come out as pretty printer-friendly if you try to print them. Artwork ranges from stock to several pieces of full-color art I have not seen before – nice. The pdf, thankfully, comes fully bookmarked for your convenience.

Owen K.C. Stephens has collected a vast array of feats, nay a colossal bunch of feats in this tome and organizing them must have been an excruciating gruntwork I do not envy. At the same time, I dreaded this review – why? Because point by point analysis would have rendered this review useless. At the same time, I could not skip through these pages either, making the work on this review, though it may not show to you, an excruciating slog on my end as well.

That being said, while this ate up a lot of my time, I am glad I did not opt for the easy way out. Why? Because then I wouldn’t have seen the fixes made to several of Paizo’s…let’s say, less than stellar rules-decisions. Now granted, not all pieces of content will find their way into my game and yes, I consider quite a few options provided in player companions et al. over the years OP. At the same time, some fixes actually make me contemplate using feats herein, fixing exploits and the like.

But how do I rate this? From the get-go, my decision way to not rate this as a feat-collection, but rather on the virtues of it being a compilation – and in said discipline, it excels – the filing off of serial numbers is handled elegantly. The organization and bookmark navigation is easy and concise. The fixed versions SIDE BY SIDE with the originals in the end mean that all camps will be happy – both fans of the original iterations and those that disliked exploits presented by the originals.

In the end, the amount of problematic feats and things I personally would have liked fixed is miniscule when compared to the workload that went into this tome and its overall content and presentation. And yes, while navigation, due to the necessity to avoid closed IP, is less intuitive than one would like, this book makes it as easy as possible within the legal restraints. As such, there is not much to complain regarding this massive book – and hence, my final verdict will clock in at 5 stars for a well-crafted, well-organized reference document.

You can get this massive reference document here on OBS and here on d20pfsrd.com’s shop!