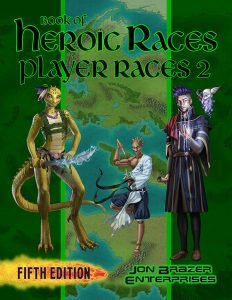 This book of races clocks in at 13 pages, 1 page front cover, 1 page editorial/introduction, 1 page advertisement, 1  page SRD, leaving us with 9 pages of content, so let’s take a look!

So, structurally, this book contains 4 new races, with each race receiving between 2 and 3 pages of information, which include physical descriptions, notes on the society of the respective race. Each race gets one stunning artwork, with the androids getting 2 additional ones that are slightly more comic-like in style, but also neat.

Two of the new races herein are constructed beings: The first would be the androids, who increase their Intelligence by 2, and get a kind of combination of low-light vision and darkvision: Within 60 ft., they treat dim light as bright light and darkness as dim light, but when in darkness, they only see in shades of gray. Imho, this should just be called Darkvision, the Perception proficiency outsourced elsewhere, but that’s cosmetic. Androids have advantage on saving throws against poison and enchantment spells; this is *slightly* ambiguous, for the reference to “poison” here could refer to the poisoned condition, and/or to poison damage. In comparison, the rules-syntax of Dwarven Resilience made that clear by contrasting it with resistance to poison damage, but this is admittedly nitpicking; I assume that the poisoned condition is meant. They also get proficiency in a weapon of their choice, and in Perception, but otherwise are Medium, 30 ft. speed. Two android subraces are provided to choose from.

Alchemical androids increase Dexterity by 1, their speed to 35 ft., and gain proficiency with their choice of alchemist’s supplies, cartographer’s tool, glassblower’s tools or tinker’s tools. Technological androids increase their Constitution by 1, and get advantage on saves against lightning damage and also have resistance to lightning damage. They also get an additional language.

The second construct race would have a less pronounced science-fantasy angle: The Geppettoans. The race’s name makes it obvious: We have the wooden Pinocchio-style race. Originally created by a fair and kind-hearted man, the design to create these intelligent servitors was quickly abused…until the race broke free. They increase the Intelligence and Constitution by 1, are Small with a 25 ft. speed, and are proficient with club, greatclub, quarterstaff and spear. They are immune to disease, but can ingest potions etc. like living creatures. They do not need to sleep, but must spend 4 hours a day maintaining their animating runes. This race has no subraces.

Beyond these constructed races, we have the Gillfolk free of their erstwhile aboleth masters. A warlike people, the Gillfok here reminded me less of the traditional Lovecraftian angle, and more of the subjects of e.g. Aquaman (or Prince Nemo, if you prefer Marvel); they increase Strength by 2, are Medium and have a land and swimming speed of 30 ft. They are proficient with net, spear and trident and the Athletics skill. Gillfolk who spend more than a day sans being fully immersed in water for at least one hour suffer disadvantage on all actions for that day. They can, obviously, breathe both air and water.

Two subraces are presented: Deep sea gillfolk increase Constitution by 1 and gain nominally the same Enhanced Sight feature as the androids, save that it actually has different effects: It has a range of 120 ft., but does not offer proficiency with Perception, and yet has the same name as the android feature. I think different names would have been preferable here, They also are have resistance against cold damage and advantage on saving throws vs. cold damage. Shore line gillfolk increase Charisma by 1, and know the shocking grasp cantrip. At 3rd level, they can cast speak with animals 1/day, and at 5th level, misty escape 1/day, all using Charisma as their spellcasting ability.

The final race would be lizardfolk, who increase their Constitution by 2 and gain proficiency with blowgun, handaxe, javelin and maul. They come with 2 subraces: Dragonsired lizardfolk increase Charisma by 1 and gain resistance against your choice of acid, cold, fire, lightning or poison, and also advantage on saving throws against these effects. Here, it’d be interesting to know how this works regarding poisoned condition/poison damage, and they also get a cantrip of their choice from the sorcerer spell list, using Charisma as spellcasting ability. Swampkin lizardfolk increase Wisdom by 1 and gain Hold Breath as well as +1 natural armor bonus…which isn’t how 5e handles natural armor. 5e uses natural armor as an alternate AC-calculating formula that does not stack with e.g. Unarmored Defense etc. Then again, this doesn’t break the game. As an aside, I’d have preferred to see a non-draconic lizardfolk subrace, after all, we already have dragonborn as a core player-race.

Editing and formatting are very good on a formal level; on a rules-language level there isn’t much to complain about either, with all my niggles being nitpicks. Layout adheres to the series’ standard, with green stripes on top and bottom, and the artworks deserve special mention: The prestige artwork that accompanies each race is really nice. The pdf comes fully bookmarked with nested bookmarks for your convenience.

Dale C. McCoy Jr., Richard Moore, and Kevin Morris deliver a really nice supplement here. All of the races herein are power-wise within the same rough area and shouldn’t unbalance most games. Now, personally, I’d have liked to see some supplemental material for the races, or at least one instance of slightly more daring design; the content herein is pretty conservative in what it offers. But considering the low asking price, I do think that this is worth taking a look at. My final verdict will be 4 stars.