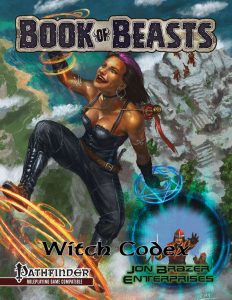 This installment of the Book of Beasts-series focusing on NPC Codex-style NPCs clocks in at 26 pages, 1 page front cover, 1 page editorial, 2 pages of advertisement, 2 pages of SRD, 1 page of back cover, leaving us with 19 pages of content, so let’s take a look!

Okay, as usual, we begin with a brief introduction before diving into the respective NPC stats; the focus, for the most part, lies on the statblocks, though, like in the NPC Codex, there are a few instances where the statblock is followed by a brief sample NPC personality and potential roleplaying advice for said named NPCs. The rationale here is clever: Essentially, statblocks that do not take up enough room use the extra space to deliver this bonus content of sorts; conversely, this means that these entries mainly show up between the extremes of the level-range.

The pdf includes a total of 20 statblocks, one for each level, thus spanning CRs from ½ to 19. A significant plus as far as I’m concerned: there are no derivative statblocks in the supplement, so you won’t see one statblock at CR 1, and a mildly-modified/scaled version of the same statblock at CR 5; instead, each of the builds actually is independent, which is a great thing as far as I’m concerned. It’s also nice to see that base statistics are included in the builds, as is a proper tactics section.

Beyond this show of genuine passion and care, the supplement also features another aspect I very much enjoy seeing: This book makes full good of PFRPG’s extensive book canon: Ultimate Wilderness, Ultimate Intrigue, and, of course, the older hardcovers (excluding, interestingly, Occult Adventures, pretty much my favorite PFRPG 1e hardcover by Paizo), which helps diversify the content presented in a significant manner. The builds actually represent this broad focus in more than one way: The CR ½ Coven Aspirant, for example, has chosen Defiant Luck, with the spellbook including snowball.

At CR 1, we have a goblin tribal cursecaller, with corresponding low Wisdom and Charisma, and a spell-selection that includes aphasia and mudball. I really enjoy seeing builds like this. Why? Because PF1e, in some of its best moments, uses mechanics to underline the story and flavor of a creature or NPC, generating this cool mutual reinforcement between rules and flavor.

Of course, there also is a rather significant diversity between patrons chosen for the various witches. The CR 2 clandestine practitioner, for example, has the ancestry patron, while the CR 3 draconic debilitator uses the occult patron; the kobold uses the hex channeler archetype, and with flame-retardant outfit and two different grenades, the fellow feels radically different from any builds after and before it.

Need an arcane skirmisher with hit-and-run capabilities? What about a CR 4 grippli using the woodlands patron and blowgun and Opening Volley? Yeah, cool build. At CR 5, we have a hedge witch (with a super-minor cosmetic hiccup: The correctly formatted archetype is listed twice in brackets; does not influence integrity of statblock) that pretty much is a take on the white witch trope; nice!

A dwarf brewing specialist has sensible feats: Brew Potion, Brewmaster, Ironguts…you get the gist; the rules complement the concept; same e.g. for the CR 7 changeling sea witch with a tidal theme, blending “stormy” aggressive and defensive options, resulting in a we—rounded build, including Brilliant Spell Preparation and a properly reserved slot. NICE. In fact, that is probably one of the things I enjoy most about these NPC builds: I can see these characters actually existing in the game world; they make sense.

Need a dhampir caster with a serious vampire mage angle? You can find it here. A sylph with a hard and soft terrain control angle themed around mobility and a theme of mists and air magic? Included. A tiefling with a seduction/enchantment theme? Yep. Want a witch who, spell-wise, cleaves closer to the wizard, representing arcane schooling? Included herein. Want a hermit with a subdued dark fey/thorn angle? You can find ne in this pdf. With the bonded witch archetype and deception as a patron, we have a CR 13 half-elf that makes for a good take on the arcane thief/heist-specialist. The ratfolk skin changer would do skaven proud, with a blend of transmutations & plague-based magic.

The book also includes an evil monarch build focused on domination and vengeance, supplemented by full-blown battle magics, and, on the other side of the spectrum, the most potent witch herein masquerades as a shepherd…and if you cross them, you may end up as a goat…

One of my favorite builds in a while: Fetchling gravewalker 17 that has a spell-selection based primarily on necromancy, with darkness and debuffs plus clever selection of hexes and supplemental options, making this witch a threat in regular combat, but also a surprisingly efficient serial killer style adversary. A genuinely cool villain build that made me come up with a neat adventure outline.

Editing and formatting are excellent on a formal and rules-language level; well done! Layout adheres to a two-column full-color standard, with a black border, and the pdf includes a blend of new full-color artworks and classic stock art pieces. The pdf comes fully bookmarked for your convenience.

Richard Moore delivers, big time, in this NPC-Codex-style offering; the builds are versatile, make sense in-game as persons, and still retain a wide variety of tricks that make them mechanically viable for the respective focus of the build. The pdf does everything right that I’d want here: The builds are versatile and varied; they make use of a ton of options and provide a blend of straight and rather out there builds, and all without compromising the viability of the respective statblock as a representation of a character actually existing in-game. Heck, when a statblock makes me come up with a module structure? Yeah, awesome.

This is 100% worth the low asking price and stands as an excellent representation of a damn fine NPC Codex-style book.

Final verdict? 5 stars + seal of approval, Best of-tag. Want a selection of diverse and cool witch statblocks? Get this. Heck, this might be worth getting even if that’s not what you’re actively looking for.

You can get this fantastic collection of witch-builds here on OBS!

The entire series so far has been really impressive, so I can heartily recommend the subscription option here!

If you enjoyed this review, please consider leaving a donation via paypal, or joining my patreon here.