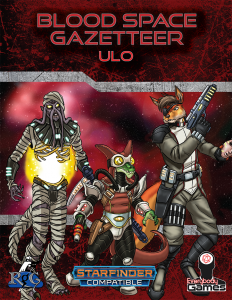 The first Blood Space Gazaetteer clocks in at 33 pages, 1 page front cover, 1 page editorial, 2 pages of SRD, leaving us with 29 pages of content, so let’s take a look!

Some introductory note: Even if you do not play Starfinder, and instead e.g. use Stars Without Numbers, Traveller, etc., or if you’re looking for planets to e.g. add to Legendary Planet campaigns, this is well worth checking out – this book is all about the themes; while it ties in with SFRPG’s themes, the true capital of this book is its ideas, and these remain system neutral and relevant beyond the confines of the rules-system.

I’ve been waiting for this supplement for a long time; in case you’re not aware of that, Rogue Genius Games and Everybody Games have a shared campaign setting, the Xa-Osoro system, where, in the aftermath of one of the twin stars (Osoro) going super-nova, the eponymous blood space, a supernatural nebula, spreads. This catastrophe, known as the Regicide, has also destroyed the human’s home planet in the system. All of these basics are explained in the introduction, so even if you’re new to the party, you won’t be missing out. As an aside, if the concept of Blood Space sounds awesome, get the Occult Skill Guide: Blood Space Corruption.

Before you dismiss the Xa-Osoro system as a grimdark dystopia, let me state that, for me, personally, it is the contrast of such dark and occult elements with a future that is genuinely worth fighting for: The future of the Nova Age is depicted as dangerous, yes, but also as genuinely amazing; if you want to see how pleasant and unique the setting can be after reading this book, I’d seriously recommend getting pretty much the entire Pop Culture Catalog-series. None of these are required to use this supplement, mind you – they are just my recommendations for diving further into the Xa-Osoro system if you enjoy what you’re reading here.

Anyhow, this gazetteer deals with Ulo, nicknamed “The Tempest” – and a quote establishes the themes here better than I ever could, so let me just quote it:

“To live in orbit around Ulo is to live in the shadow of fear. Sometimes

I look up at its immensity and go numb, frozen in place by the sight of

storms that could swallow entire worlds. But what keeps me up late at night

is the knowledge that even in its fury, this giant is merely sleeping.

What, I ask you, will happen when it awakens.”

Ulo is the grand, blue titan of the system, orbited by dozens of moons, making the vast planet essentially almost a micro-galaxy of its own; in spite of the prevalence of storms, Ulo is actually not a gas giant, but a supermassive ice giant, with living clouds of glittering silver and darkened black streaking across the skies. The ginormous planet is roughly divided in two different zones – one over the massive storm-clouds, and the frigid, perpetually-frozen sunless zone below. Hundreds of floating cities with habitable atmospheres gaze upon the vast storms, and the more I read of this place and the majesty of its stormscapes, the more do I experience a genuine kind of Fernweh, of a longing to visit this place.

The natives of Ulo, the ulozi, are 15-foot sized rime-covered humanoids colloquially called “frost giants” after the now extinct creatures once found on the long gone world that humanity called home. Beyond these, humans, nuars and mechanoi are the most commonly-found races in this wondrous habitat, and before you ask: Me talking of “living storms” was not a misguided attempt at mirroring the prose of the supplement, but a verifiable statement, for hive-minded, competing colonies of nanites. This angle is absolutely grand: I can see the storm-worship, the strange artifacts hidden and dismantled within the eternal tempest…particularly when coupled with the sentient constructs dubbed djinrazi. I don’t know if this is simply my background in literature, but associations ranging from Percy Bysshe Shelley to William Butler Yeats, immediately started combining themselves with this vista, this set-up.

Interestingly, the Tempest’s unique composition seems to repel blood space, which adds another truly exciting angle to develop to the planet – and yields more adventuring potential, for the repelled blood space hits the moons all the harder… We learn of the natives and the Free Cities of Ulo, and once the basic overview is done with, I found myself hard-pressed to not start sketching a proper adventure set-up right away.

But can the gazetteer retain this level of wonder in its details? Well, the Cloudhopper Station as a gas-mining-facility, the orbital space station Galactic 1 – these are obviously interesting. But, to take up a thread from above – if you think that me bringing literature into the fray was an over-interpretation, what about an ice-station called “Xanadu”? If that is no Samuel Taylor Coleridge reference, I’d be rather surprised. (And yes, in my iteration, I’ll certainly add a “stately pleasure dome” for the scientists working on applied hyperspace mortality dynamics there.)

The city states (with notes on alignments, population, government and qualities assigned) are no less compelling than the sentient super-storm known as “The Twisting Eye” – and what about the unyielding plateau of Voz Ulgoh, which may well be hiding a massive, artificial object? Did I mention that we also receive information on the politics of the mega-corporations here?

Largest of Ulo’s moons, and closest to it, we next move on to Bantosian, also dubbed “The Menagerie” – and unlike Ulo, it is pretty earth-like in diameter, mass, gravity, etc. The moon is home to the bantosiai, catfolk – and while the planet is part of the Radiant Imperium, it does have mutative properties that humans don’t suffer well; however, their kitsune allies do, making them the most potent arm of the imperium here. Oh, and to my joy, this place also houses grippli. Grippli are awesome. Lightless jungles where no ray ever passes through the dense foliage, and entirely separate eco-system in the caverns, and a white sanded tourist hub called Evalli complement the place. (And yes, if you’re a fan of the Pop Culture Catalog-series, you’ll remember a rather awesome adventure hook for said resort…) The metropolises of the place, its Yggdrasil-theme-like world-tree, the sacred peaks – the place wanders a great tight-rope act between adventure potential and a negotiation of different cultures. Radically distinct in theme, the moon adds a wholly new and distinct dimension to the narrative potential established in Ulo.

Eogawa, dubbed “The Plagued” is next, and it is most assuredly a place that writes its own adventures: You see, when blood space hit the moon, an exceedingly virulent strain of therianthropy developed, transforming almost the entire population into were-creatures. Worse, the storms of Ulo refracting moonlight mean that many afflicted can never leave their frenzied state…so yeah, this place is DANGEROUS. While vanara and similarly wise/enlightened species do thrive here, Eogawa is, ultimately a place on the brink. Coalitions of afflicted therianthropes attempt to live with their condition…which include a messianic figure. The contrast of the value of wisdom with the loss of it, with the raw savagery, makes for an intriguing contrast and has an intrinsically compelling logic. Did I mention the eternal maelstrom, or the settlements?

Lunox is up next, and it might have once looked like a typical, barren, lifeless rock, but terraforming is in the process of transforming this planet into a truly vibrant, fledgling world – while 99% are still lifeless, Lunox is a boom-world in the making, with seas of dust. If you’re looking for an environment that lets you go into the space-colonization angle popularized by books such as “Martian Time Quake” or the Mars-series? This lets you do that, and all without just rehashing the established themes, instead adding its own themes.

The final fully-realized moon featured here is Uramesh, a place I already commented on in detail when it was first sketched in the Star Log.EM-series – and I loved it back then. Once a vibrant and gorgeous world, the place is now a place ruled primarily by the undead in a strange two-caste system, where the living are both infantilized and protected; in a way, it is a meditation on the nature of stagnation and extreme conservatism as a force that is both important (for it helped ensure survival), but also destructive; without being preachy, for it is contrasted with the rampant mutation of change for change’s sake exemplified by the deoxyians – it ties in greatly with the genesis of the deoxyians and the uramae races, and if you really THINK about this place, you might well get some serious food for thought.

Or, you know, you can just enjoy the great writing. 😉 5 additional lesser moons are included, from Vesk-71 to Skarn, the Bloodied – and then, there is Zero One Zero, a moon transformed into a living machine, a technological paradise!

Conclusion:
Editing and formatting are very good, I noticed no serious hiccups. Laoyut adheres to an elegant two-column full-color standard, with a blending of new and classic full-color artworks by Jacob Blackmon and tk769 providing a consistent visual identity. The pdf comes fully bookmarked for your convenience.

Alexander Augunas’ optimism and Matt Banach’s darker angles would have resulted in a harsh disjoint of themes if they were not the authors they are; while Alexander Augunas is primarily known as a truly talented designer of rules, he is one of the few such authors who also excel in writing absolutely amazing flavor – he has written, time and again, plausible, novel cultures that made me suddenly love them. Matt Banach has also, time and again, featured among my favorite writers, so it should come as no surprise that this book is wonderfully-written. Better yet, the authors have managed to blend their styles and allow us a glimpse at a truly astonishing place. This book provides a detailed look at planets and moons, the most detailed glimpse we’ve got of this fantastic star system so far, and this delivers in themes, ideas and sheer imaginative potential. 5 stars + seal of approval, can’t wait for more!

You can get this amazing gazetteer here on OBS!

Alexander Augunas is working on an amazing RPG – you can support Eversaga here!