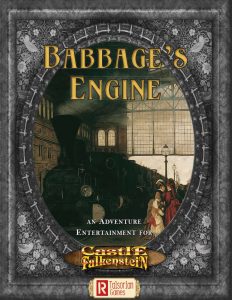 In case your undoubtedly busy schedules should have prevented you from crafting sample dramatic characters, no less than 6 of these have been provided for your immediate enjoyment. These include lavish pieces of artwork and photography and some guidance to properly depict these fine individuals of, as a whole, more or less proper breeding and education, in the entertainment to commence. These individuals are obviously presented in proper hand-out format, as well as in a form that collates the more mundane information in a few pages, as is proper: After all, the host should have an idea of the capabilities and peculiarities of the dramatic characters. It should be noted that these individuals include the rather outrageous “Duck”, obviously a member of the Faerie, a so-called Padfoot, in case you are not familiar with said individuals; interestingly, this individual does look like a right dapper fellow of the canine profession. Speaking of dapper: Fellow dwarven master Edelweiss, who does have a most suave beard of which I am quite jealous. It should also be mentioned that the former chef of the Kongolese embassy, one Ms Maria Banza, recognized by the Druidic Temple, is included here. And no, your memory does not deceive you, mademoiselles et messieurs, the revised iteration does indeed feature much more colorful (pardon my bad pun) and interesting dramatic characters for our perusal.

So, the dramatic characters are witnesses and guests of the maiden voyage of the Duchess Elizabeth and they will have a chance to prove their proper upbringing and character by defending Professor Karla Reinhard from some lower class ruffians – upon doing so, they will have an easy means/hook to get aboard, in the case the host has not yet provided such an angle to pursue. The Professor’s child Mau Sascha Reinhardt has also been changed – the individual now eschews traditional gender-binaries, dressing and behaving as fancy strikes them. The eccentric duo is here to install the Automated Telegraphic Punched Card Shuffler, a device crucial to the speedy and remote operation of the eponymous Babbage’s engine powering the train. One nice aspect of the revision pertains to the explicit notion that the train was constructed by dwarven metallurgists, which renders this particular means of industrial propulsion less inimical to the faerie, allowing such dramatic characters to participate in the adventure entertainment in a less challenging manner.

A vast improvement undertaken by the honorable individuals tasked with improving this experience, would be the fact that we now do get proper maps for the Duchess Elisabeth, making the adventure entertainment significantly less work-intense to research for the host who is not into cutting-edge technology such as the Duchess Elisabeth. Of course, it is only a matter of time before the inevitable arrival of some dastardly rogues hell-bent on attempting to kidnap the professor…which, after a scuffle, results in the train’s entire car being stolen via the massive airship that he dastardly villain of this tale commands!

Apologies, my dear hosts, for I am getting ahead of myself, failing to note that the train can act as a perfect way to introduce some of the famous individuals of our age – from Arsène Lupin to Mark Twain, there are more than a few famous individuals on board, though these colorful persons and their involvement in the proceedings to come ultimately depend on the needs of the host.

I was elaborating on the vile mind behind this most despicable ploy, correct? Well, one Lord Anton Dire, indubitably of questionable parentage, lord of a tin-pot Germano-Slavic micro-nation, has managed to construct this airship, courtesy of a strange material called Radium -and he considers Babbage’s engine to be one step towards his imminent rise to power. The whole capture of the dramatic characters, alas, lacks crucial freedom for the respective guests entertained; it is simply assumed that they are overwhelmed and brought into the hidden hangar of aforementioned lord – at this point, I distinctly recalled Mr. Olam telling of a series of tales of a man named “Bond”, projected in moving images, not unlike those generated by a laterna magica; the similarities are peculiar indeed, including an all but moustache-twirling villain-monologue. This exceedingly galling piece of railroading, if you pardon my excursion into puerile humor, has, much to my chagrin, not been rectified. While the adventure entertainment does feature a few pieces of advice for handling such digressions from the plotted course, I nonetheless cannot help but consider it less than proper to be forced to impinge in a thus pronounced manner upon the freedom of choice expected by the guests of my soirées.

The inevitable escape of the dramatic characters from the map-less base of the archfiend is, alas, once again glossed over. This can prove puzzling, to say the least, for we are living in an age of high adventure and it is hard to picture something as adventurous as climbing outside of a train car, hijacked by evil forces unknown, to bring righteous battle to the adversaries, whether to the devious devices, or within the labyrinthine fortress…but I digress. The escape is supposed to be relatively easy for the dramatic characters, though I do consider it to be similarly still lacking in depth – while Lord Dire does adhere to at least basic premises of honorable conduct, I nevertheless found myself to be a bit flustered here: The adventure entertainment does try to justify the lack of a map for the baron’s fortress, but considering the tropes of espionage, a proper means to plan for the dramatic characters would have greatly enhanced the experience here. On the plus side, the revised edition does account for the notion of a proper duel, though it does turn out that my assertion did hold true – Mr. Dire, yes, I will not dignify his delusions of grandeur, has no noble bone in his body, going to far as to renege on his most sacred of words! For shame, Mr. Dire, for shame!

Ultimately, the dramatic characters will have to attempt to pursue the Reinhards and the Baron onto his flying platform (which receives the proper statistics for use in the Grand Game, and this iteration does indeed also provide rather nice cartography of said marvel), where the villain escapes with the younger Reinhard as hostage on an ornithopter – and potentially, an interesting chase begins, concluding this brief adventure entertainment with a well-written epilogue.

Editing and formatting are very good, I noticed no serious issues. Layout adheres to a beautiful, elegant 2-column full-color standard and the artworks constitute a wonderfully chosen blend of period piece photography and fitting art. The electronic format sports navigation helpers, commonly referred to as bookmarks, for your convenience, and the inclusion of more cartography does increase the utility of this humble offering.

The revision of grandmaster Stephen Kenson and Mister J Gray provide an adventure entertainment, which structurally mirrors the means of propulsion that is at the center of the proceedings depicted: To put it bluntly, this is a railroad. If an engagement of your higher faculties is what you are looking for, then I do suggest “Firearms & Margarine” instead – which, to me, is the vastly superior offering. Why? Well, this, as the pedestrians would call it, thrill-ride sprints from evocative scene to evocative scene and paints in gorgeous colors a vision that makes great use of the unique peculiarities of this gorgeous world of ours, capturing the spirit of high adventure rather well; alas, while the prose paints the proceedings of the plot in poignant highlights, the details that are expected, if we remain within the metaphor employed, remain sketches that are not filled out, an issue that has not been rectified in this novel representation of the adventure entertainment.

As long as the dramatic characters follow the linear structure of the plot, this works brilliantly, and does have a proper raison d’être as an entertainment for those conglomerations commonly referred to as “conventions.” For the more cerebral of hosts and guests, however, there are plenty of times when the proposed course of action may not necessarily make sense from the dramatic character’s perspective. Here, the illusion of choice remains very thin indeed and as a whole, even in the more open sections of this offering, the host will have to engage in A LOT of improvisation.

To cut my lengthy and sufficiently verbose analysis short: While the revised iteration of this adventure entertainment has improved a lot of details, its structural shortcomings remain: It buckles under the weight of its own ideas and simply does not spend enough time and pages to adequately develop the respective scenes. As long as the host can maintain a brisk pace and sweep the dramatic characters from scene to scene, all’s well…but there are plenty of potential hiccups if the protagonists-turned-watchers start tugging at the very thin curtain that’s hiding the proverbial wizard.

All of these criticisms may not apply to some groups out there, but the sense of dissatisfaction on a high level remained with me – with about twice the pages allotted for the details, more freedom of choice, and less automated scenes and progressions from scene to scene, this could have easily went down in the annals as a true masterpiece. In its current state, however, I cannot rate this adventure higher than 3.5 stars. Now, the improvements in the details, as well as the fact that this is offered for our perusal for FREE, does render this an improvement, which is why I will round up. If your group prefers action, then you should round up as well; if you’re like me and prefer Castle Falkenstein of a more versatile, cerebral bent, then I’d recommend another adventure entertainment over this one.

You can get this adventure for FREE here!

There is also currently a massive Bundle of Holding that is a perfect way to start Castle Falkenstein – you can check it out here!

If you consider the reviews of your humble fabulist to be of any use, perchance, do consider leaving a token of your appreciation and contemplate joining the illustrious circle of my patreon supporters!

I bid you adieu for now, Mesdames et Messieurs,