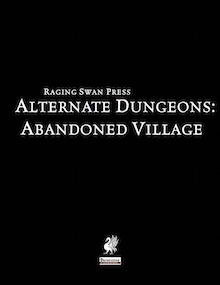 This installment of the Alternate Dungeons-series clocks in at 14 pages, 1 page front cover, 1 page advertisement, 1 page editorial/ToC, 1 page SRD, 1 page back cover, leaving us with 9 pages of content, so let’s take a look!

As has become the tradition with these supplements, we begin the pdf with the limiting factors and peculiarities that face a GM designing such a dungeon – a GM-cheat-sheet of terrain hazards and the like, if you will. The interesting suggestion here is for experienced GMs – namely, letting the players draw their own conclusion and thus guide their reception of the village: You describe the ruins, not what truly was here, thus allowing for interpretation, which you can then further utilize to weave your narrative. Beyond structures with multiple levels and undergrowth, rotting barriers and doors, structural damage and size constraints, 4 events to spice things up provide ample uniqueness factors here (though the omission of the possibility of flight is a bit annoying). As always, we get suggestions for unique treasures that may be found herein, a component that can, when played correctly, greatly increase the sense of immersion and which may actually spawn new adventures.

There are also different factors to consider like wild animals, haunts and squatters…or perhaps even turf wars led to the area being vacated? A table of 38 dressings (unless I’ve miscounted; two are reroll and add) deserve special mention, for they often contain mechanically-relevant components -if you’ve played Resident Evil 4 or The Evil Within, you’ll have an idea of how to weave these together for maximum effect…and even if you don’t, well, that’s what the sample denizens are for: from the lowliest squatter to vermin and the undead, going all up to dread night hags and even golems, the sample denizens suggested not only provide a fitting diversity of challenges, they also sport sufficient diversity in tone – from the far-out to the mundane. The traps and hazards presented, including partial collapses and chicken wires also follow this theme, as does the poison oak plant (including two variants of its toxin). Going above and beyond, the pdf also sports two creepy sample haunts.

The pdf also sports a sample abandoned village: Ashford. And you’d be correct in assuming that the fully mapped village is the same as in the Village Backdrop of the same name. While VB: Ashford is one of my favorites in the whole line, I still would have preferred a new village instead of a partial reprint of the original village backdrop.

Where the pdf once again shines is with the 3 abandoned village-hooks that close the pdf – here, the inspiration is clearly and readily apparent and all of them are very intriguing.

Editing and formatting are top-notch, I noticed no significant glitches. Layout adheres to Raging Swan Press’ two-column b/w-standard with nice artworks and the cartography of Ashford is still awesome. The pdf comes fully bookmarked and in two versions: One intended for the printer and one for screen-use – kudos!

Daron Woodson, mastermind of Abandoned Arts (get the meta-joke here?), is a capable author and designer and it does show here – we have perhaps my favorite Alternate Dungeon in the whole line here…concept-wise. The abandoned village is a trope rarely used in commercial modules (yes, authors – this was a call to action!) and thus, this is a fresh and well-rounded offering in most regards. At the same time, I do feel that this falls short of what it easily could have been. The omission of flight and burrowing as potential components in such circumstances is a pity. furthermore, I do believe that this could have benefited from more space allocated to potential things you can find in an abandoned village. Don’t get me wrong – what’s here is actually pretty awesome, but I do feel the book would have been better served with slightly more pages to shine than with Ashford’s partial reprint – I could nitpick on what one could sport in such a fruitful environment, but that would just be wasting time. What’s here is great, but it does leave me wanting (and really, expecting) a bit more to make the environment truly shine. As such, my final verdict will clock in at 4 stars.

You can get this nice installment of the Alternate Dungeons-series here on OBS and here on d20pfsrd.com’s shop!

You can also get a kind of subscription of Raging Swan Press’ supplements by joining their patreon here!
Endzeitgeist out.