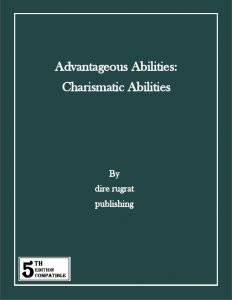 This pdf clocks in at 8 pages, 1 page front cover, 1 page editorial/foreword, 1 page advertisement, 1 page SRD, 1 page back cover, leaving us with 3 pages of content, so let’s take a look!

Dire Rugrat Publishing’s 5e-conversions are a joy to behold in that they add unique abilities to the respective NPCs. Alas, the original iteration of this pdf failed pretty nastily in the depiction of these unique abilities out of context. However, not one company to be dissuaded by harsh feedback, the dire rugrats have revised the book and now begin this pdf with a section on how to properly use the respective abilities included. The abilities are now codified in an easy and concise manner, sporting refresh conditions, if applicable, in brackets behind the name. Furthermore, and this is perhaps the most significant improvement here from a structural point of view, the respective abilities now actually provide a Challenge Rating-modification. While usually 5e-statblocks speak of “challenge” instead, challenge rating is actually referenced in the Monster Manual, so the CR-abbreviation gets a pass here, in spite of being more commonly used in PFRPG’s rules language. Anyways, the inclusion of these ratings now allow tighter control for the GM and a better guideline of the challenges the addition of these abilities result in. Where applicable, such abilities have a save DC equal to 8 + proficiency bonus + relevant Ability modifier. The second important aspect would be that the abilities featured herein have now been properly codified as passive and active abilities and reactions.

So, what do we get here? In short, we get abilities you can add to specific NPCs to grant them a more unique flavor, some tricks to set them apart, if you will. A total of 9 passive abilities are provided: Distracting Allure, for example, lets you add your Charisma bonus to Dexterity (sleight of hand) checks. As a minor nitpick, it does imply attraction and lacks a caveat to represent other critters – RAW, it would apply to creatures not attracted to the character like sentient oozes or worse. Being a local celebrity has its perks – and now the opaque “city” employed in the rules-language is properly codified. Being hard to persuade and various forms of advantage when interacting with certain demographics also are included here alongside a betrayal’s first strike when you drop the charade and put the knife in your foes. As a minor complaint – the reputation-based abilities that feature a fixed DC would have imho been served better by a scaling DC. “Hang in There” leaves me puzzled: When a companion is frightened, the creature can cause the companion to ignore the condition for Charisma modifier rounds, with the rounds counting towards the duration of the effect. So far, so good…but this does not look like a passive ability. In fact, I’d honestly consider that a kind of reaction…at least for as long as it has no range and requires neither sight nor audible means of contact.

A total of 5 active abilities are part of the pdf as well: Fearful Insinuation allows the character to deliver threats without seeming threatening. If successfully intimidated, the creatures suffers disadvantage on the next attack roll or saving throw. The ability also lacks a means to notice the intimidation while observing it. Enhancing an ally’s Charisma (Deception) proficiency bonus times/day is interesting. Similarly, I love the ability that lets a creature move with a grace that renders targets incapacitated on a failed save, provided they have a clear path towards the target. I assume activation action here being just an action, but am not 100% sure, since the pdf does not state it explicitly, unlike in all the other abilities here. There are nice ones here as well, including the means to thwart all manner of social relationships – discord is thy name….

Speaking of reactions: 4 are provided. Most lack the “you may use your reaction”-wording-component and though, considering their header, it is pretty clear how they should work, it can still be a bit odd: “When it fails a Wisdom saving throw, this creature may immediately make a second Wisdom saving throw and add its Charisma modifier to the result.” – see, this does not READ like a reaction; it reads like an always-on passive ability. Functional…yes. But unnecessarily confusion in the context of actually using it. Getting a Charisma save versus frightened or stunned at a fixed DC ( as opposed to the original DC) still feels wonky to me. There is also a short rest healing ability that lacks a range and now interacts with maximum healing based on HD or spell – 1/2 its HD, rounded down. Fun fact: This one employs the proper reaction wording. Odd…Finally, swapping targets of an attack once again is interesting.

The pdf closes with a nice Proficiency-bonus by challenge and challenge/XP-table for the GM, adding some serious usefulness there and avoiding undue book-flipping.

Editing and formatting on a formal level are nice, but on a rules-level, there still are some inconsistencies to be found. Layout adheres to Dire Rugrat Press’ two-column b/w-standard and the pdf has a solid b/w-artwork but no bookmarks, but needs none at this length.

Kelly & Ken Pawlik’s second collection of advantageous abilities has significantly improved in the revised edition – while not all of the abilities are 100% perfect, they now provide sufficient guidance for GMs and generally can be employed in game sans creating an undue assortment of question marks. The added codification according to CRs and tables alongside also help improving the value of this little pdf. In the end, this revised iteration does offer some nice content for the very low price point and thus is worth a final verdict of 3.5 stars, rounded up to 4 for the purpose of this platform.

You can get the improved and revised version here on OBS!