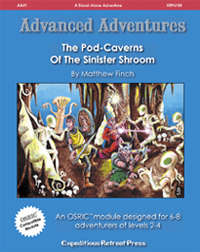 The first of the Advanced Adventures-modules clocks in at 17 pages, 1 page front- and back cover, 1 page editorial ½ a page SRD, leaving us with 14.5 pages of content, so let’s take a look.

This review was requested and provided as a prioritized review by one of my patreons.

All right, quick history lessons – this is, to my knowledge at least, may well be the first ever commercially available OSRIC-module ever, which is a pretty huge deal that renders this a sort of almost historical relic of sorts for fans of OSR-style gaming. Now, the trade-dress evoked by the module obviously hearkens back to feelings of nostalgia, and indeed, structurally, this very much is in line with what you’d expect from a classic module – from the font to the lack of read-aloud text, to the aesthetics, the adventure manages to evoke the same sort of feeling, which is a good thing per se for the target demographic.

Now, I like playing advocatus diaboli, and indeed, there are things to complain about regarding the otherwise very concise aesthetics: If you truly want the classic experience, you may be galled by the absence of blueprint style maps in the interior of the covers – personally, I don’t mind. However, in the adherence to the classic formula and trade-dress aesthetics, the module also kinda ignores some industry standards – personally, I would have loved to see e.g. player-friendly maps or VTT-capable ones. There are plusses, though – the interior artwork, also penned by the author, has a distinct style I very much enjoyed. More importantly for me at least was a pet-peeve of mine – formatting is inconsistent. Magic items and spells are sometimes italicized as per the OSRIC standard, and sometimes bolded, with no discernible rhyme or reason. Now, to be fair, they are always highlighted in some way, which helps navigate and run the adventure, but the inconsistencies still galled me.

Now, on a more positive side, the pdf sports a total of 5 new monsters – vampiric moss would be pretty self-explanatory; the deadly funghemoth can be seen, or so I assume, on the back cover; the pod-men and the eponymous shroom (think evil wizard shroom-people) can also be found…but my favorite critter herein would be the snagwort. These are ugly, ropy plants hanging from the ceiling that attach their tendrils to adventurers and seek to smash them into the walls until they’re a bloody pulp. They are more hazards than really combat-material, but here’s the fun part: Their glue persists for a while after death. And they’re heavy. Yes, chances are that one of two of your PCs will carry one of their carcasses around for a while.

Now, the module is designed for 6 -8 characters of levels 2 – 4, and I’d strongly suggest a good mix of character classes. While this is no meatgrinder as far as OSR-modules are concerned, it similarly is not easy.

All right, only GMs around? Great! So, the first thing you need to know is that this actually has some replay value, at least for the GM. The module is designed so it can be tackled from two directions: Either from the ground/underworld, moving up (for example after the PC’s first dungeon collapsed/stranded them in the lightless depths), or, in a more classic manner, with the PCs exploring the depths, seeking to destroy the evil lurking down there. This two-directional approach is also mirrored in the dungeon-structure, for, whether you believe it or not, these few pages manage to contain 3 dungeon-levels. No, I am not kidding you.

Each of the levels sports a brief note on random encounter frequency is provided for each level, with the shroom’s lair, level 2, featuring a patrol as well. Now, what I liked about level 1 is that each encounter gets a little bit of agency – it’s just a word like “hunting”, “patrolling” etc., but it helps immensely in my part – alas, in a bit of inconsistency, this cool feature is not retained for level 2 and 3. Indeed, as a whole, the 1st and 2nd level are stronger than the third: In level three, we have basically abandoned laboratories and components of the shroom’s complex that have been left behind in the move towards the surface. Here, a map of the upper levels can be found (cue once more my complaint regarding player-friendly maps) and rogue pod men may be found; there is also quite a bit of delightful old-school weirdness and, as some may claim, sadism: There is a goblin shamaness who welcomes the PCs with open arms, thinking that a trapped ghast is her god. The aftermath of this encounter may well see the PCs meet the god of goblins. Similarly, there is a pool containing a sarcophagus: If the PCs dive down, they may trigger a squid-ink trap and find themselves in a black pool with a newly liberated undead. Fun times – and hey, no one said that graverobbing and adventuring would be wise professions to pick up.

That being said, the adventure as a whole does a really good job or balancing risk and reward for players: The module does not throw unfair situations at them and the risk incurred is always the result of their own actions or lack thereof – in short, this is not dickish, it’s fair in its difficulty. Still, compared to level 1 and 2, the third level lacks a distinct leitmotif and simply is less interesting.

You see, level 1, from the get-go, manages to grasp my interest: The means of egress into the cmplex has a sensible mechanism that allows smart PCs to use it, providing a bit of realism there – and subsequent incursions after retreats actually have consequences. The presence of a stream that runs through the complex as a sort of irrigation process further highlights this. The first two levels feel very much like organic, sensible set-pieces with strong leitmotifs: The first level sports, for example, maddened tree offspring of a captive treant that can be found at level 2; a giant leech-infested pool provides an alternate means to go further down. There is a bit of weirdness here, which is also encapsulated by weird and unique mosses growing in some caverns and the PCs can e.g. find fish mincers (and, in level 2, those for…bigger lifeforms…), which is used by the shroom to create the disgusting nutritional paste made to cultivate his growing army of pod-people. The first level manages to foreshadow concepts in the second level, providing weirdness, yes, but also hinting at the explanations – this indirect storytelling is really rewarding for the PCs and players alike.

Ultimately, the PCs will make their way to the prison (where they should be careful regarding what they do) and the main complex of the shroom – they’ll witness the pods and have a chance to put an end to the growing army and machinations of the hyper-intelligent fungoid threat – whose labs btw. contain detailed documents as well as a potion rack with no less than 20 potions, which contains, for example such gems as “liquid wood” or weird potions that make you run in circles and scream for a few turns.

The eponymous sinister shroom is no pushover, btw. – with potent pod-man bodyguards and quite a few spells and HD, he will definitely test the mettle of the PCs, particularly if they are at the lower end of the suggested level-spectrum. Have I mentioned the big bad funghemoth, which may actually be used to help clear the complex if the PCs are smart? Or the mushroom level-based portcullis traps? Yeah, I really, really loved level 1 and 2.

Editing is top-notch on a formal and rules-language level; as far as formatting is concerned, the pdf does sport some inconsistencies. Layout adheres to a no-frills two-column b/w-standard and I really liked the interior artworks. The pdf comes fully bookmarked for your convenience. The cartography is serviceable, but not spectacular. The absence of player-friendly maps is a comfort detriment.

So yeah, blame Matthew Finch, the author of this adventure. You see, unlike many folks that are active in the OSR-scene, I loved my old-school gaming back in the day…but frankly, there was, and this is something plenty of folks forget, a lot of crap back then as well.

There was a reason so many folks stopped buying the old books.

Not all was shiny and better. (Go ahead and call for pitchforks…)

Hence, I wholeheartedly embraced Necromancer Games, and later, Frog God Games, in their mission of providing new old-school gaming materials. I confess to having never heard about Matthew Finch when I backed the Rappan Athuk kickstarter back in the day – and I got that elusive Cyclopean Deeps bonus level. I read it and was HOOKED. When the Cyclopean Deeps hardcovers finally hit sites, I drooled all over them – I still consider them to be absolute masterpieces, regardless of system.

So yeah, that did lead me to investigate the author, to this adventure – and I sat on it for quite a while. It was the first time I really started digging regarding OSR-books. So yeah, blame Matt Finch’s excellent writing.

When one of my patreons asked me to review this series, I figured I’d begin at the start, and there we are. So, how do the pod-caverns fare nowadays, when the blend of classic and weirdness has become accepted, cherished and its own style? Surprisingly well, actually. While the module does suffer from some comfort-detriments and formatting inconsistencies, we can see a style of writing here that cites the classics without being just a knockoff – this is creative and manages to evoke a sense of consistency that draws you in – more efficiently than many modules with thrice the page-count, mind you.

Now, content-wise, I consider the first two levels to be excellent examples of stellar adventure-writing; the third level, in comparison, feels a bit like an aftertaste and a gimmick, added on to the complex without tying into it as well – it’s still good, mind you – just not outstanding. Personally, I’d run levels 1 and 2, using level 3 perhaps as its own dungeon-hook for the proper complex. That being said, level 1 and 2 warrant getting the book on their own. At the same time, the hiccups and lack of player-friendly maps do drag this down a bit – which is why my final verdict will clock in at 4.5 stars, rounded down for the purpose of this platform.

You can get this classic module here on OBS!